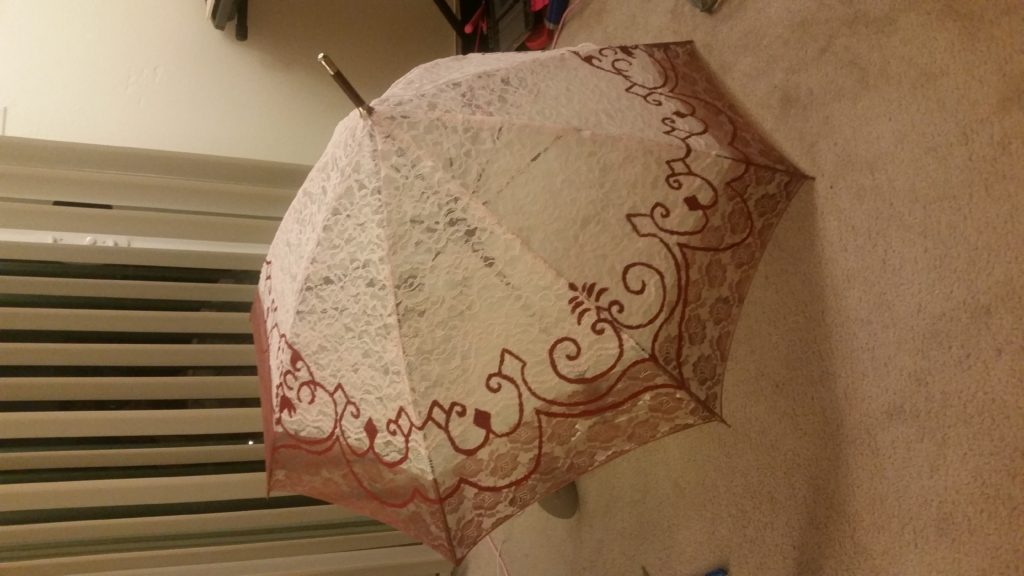 Somehow I forgot to post this, so here we go! The last and final update!

Now that all of the lace and brown dye have been applied to the parasol, all that is left is painting on the design. However, testing the lace with extra scrape lace showed that I would not be able to achieve a nice bold strip of color because lace is too perforated to hold paint. I was also planning on putting a clear waterproof layer on top using shower liner, but then I had the idea to instead put a layer of the liner on the inside of the lace so I could paint on it.

I roughly measured out rectangles of plastic liner to fit onto each panel of the umbrella and then hand sewed (since I can’t use a sewing machine without taking the lace off of the umbrella frame) it on using clear, invisible thread. First off, clear invisible thread is a PAIN to use! It feels and works more like optic fiber or plastic, and it tangles all of the time… not to mention, since it’s clear, it easily gets lost during sewing. (I would like to note that it is supposed to be used for embroidery purposes rather than sewing, but I didn’t really have a choice.) Also, turns out that liner cannot really hold the small knot of the clear thread so I had to use a spot of hot glue to keep the thread from unraveling. Once all eight pieces were sewed on, I used scissors to trim the liner away.

The shower liner looks practically invisible! In fact, you can only tell it’s there from where the liner is shiny. Totally worth the 5 hours of rather frustrating hand sewing.

Adding the liner layer underneath was actually really helpful as I could use dry erase marker to first sketch the design on the back before tracing it with paint on the front of the lace.

Painting took a total of about 2.5-3 hours including the retouching I did.

Here it is! The final product!

I ended up not having enough time to properly get a outer layer on the parasol, but that will be a very near future goal basically right after finals.