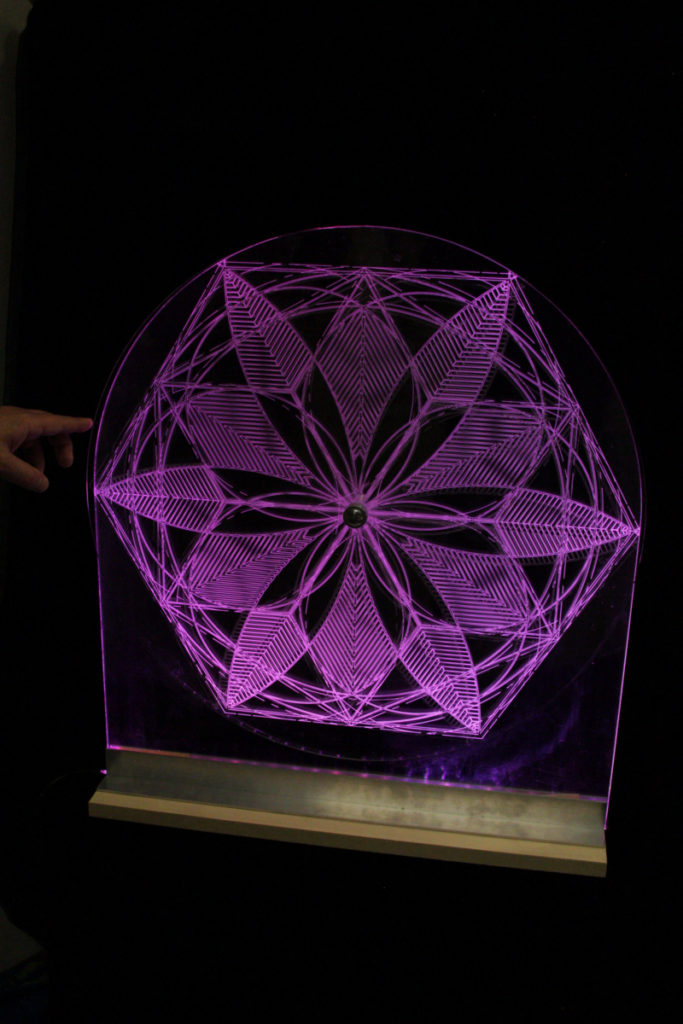 Immersion Wheel – Final Report Part II – Why and What next?

This object facilitates a brief immersion into the world of sacred geometry, it hopefully provides inspiration and a momentary escape from reality. For some who have experienced lucid patterns in other states of mind, this may be familiar. For these folks I believe the Immersion Wheel can help validate the connection between the spirit and the physical world. People who experience the Immersion Wheel will find themselves reminded of it in the architecture of places for worship, observing a snowflake, or when rediscovering basic geometry through the eyes of a young pupil. The realization that such dynamic patterns can be hiding in plain sight, and that these patterns reappear throughout the ages over vast distances, sometime even with our eyes closed, will allow people to experience a universal connection.

The moiré pattern and dynamic visual effect produced by the Immersion Wheel was intriguing to gaze at. However, there was a sweet spot where it worked best, which is when the linear pattern of the rotating plate was rotated very slowly and  just slightly displaced in relation to the same pattern on the stationary stand.  So to achieve more of a constant visual effect, the next iteration of the Immersion Wheel should be motorized to provide continuous motion. A continuous moiré effect would hopefully enhance the immersive experience.

Reflection on the semester:

This semester has been a fulfilling experience into the work of design aesthetics. I was particularly impressed with the warm-up project, where the class used up-cycling to create an object within a specific aesthetic. The reason this project was most impressive for me, is that given the title “Warm-Up Project” and the relatively short time frame, I felt that many students put forth incredible effort to create compelling objects. The short time frame seemed to have captured a level of spontaneity that drove creativity.

In many cases, the main projects were more intricate and more technically challenging. This could be attributed to the assignment to create a dynamic object. But in terms of the course: Aesthetics in Design, I feel there is an opportunity to hone in on an understanding of what exactly makes an object aesthetic and to apply this understanding to design something beautiful.

Much of what is perceived as aesthetic design is achieved in the execution of a project. This includes all aspects of project, from the design principles driving the artistic vision; to the how elegantly content is communicated. With this in mind, it would be great to see future semesters in course to focus collective efforts to produce a stellar expo. This would take the form of all students designing the same object, all with a unique and well researched aesthetic, all presented on common (well arranged) podiums. The warm-up project would be podium design proposals and the class would vote on one design, then divide the labor to build them all. The Expo would have an opening night, and then stay up for a week like and art show.

Originally, I had envisioned hexagonal patterns flying out of plates made of perforated steel. The plates would not have a central axis, but rather utilities a hub-less design to keep the viewing area free of any distracting hardware.

The result is significantly different from what I first envisioned. The perforated steel did produce hexagonal patterns. But I felt that even when painted brightly this design did not draw in the viewer enough to be considered immersive. Being immersive was key because the aesthetic I chose to work off of was “psychedelic” which should provide a little escape from reality. Another reason why I chose to change directions was that I felt that there was an opportunity to do more original design work in the creation of my object rather than relying on pre-existing materials.

So in the end, I used the original aesthetic direction and the additional learning from the perforated steel model (which was pretty much complete) to design an entirely new object that I felt was more original, attractive, and immersive. To do this I designed the patterned based on hexagonal sacred geometry which arises from overlapping common radii. So in a way, I turned the original design intent inside out. The final moiré effect is a result of parallel lines rotating against each other rather than circles. Perhaps the biggest difference in the original design and the final is that I chose to incorporate lighting that changed color throughout the viewing experience.

Visitors to the Expo seemed to enjoy the Immersion Wheel experience. It was big enough and bright enough that it drew people’s attention. Many people commented that it looked great from across the room. There was a lot of curiosity about how the lighting effect was achieved, and people got a kick out of the different light settings (flashing vs. fade, and cycling through colors). Viewers also complimented the pattern for its beauty. One visitor stands out- as he approached the display, he just stopped and said, this is sooo beautiful. I take this as a reaction to the inherent nature of the hexagonal pattern and the connection with nature. The moiré effect had the biggest impact on users. Most people didn’t realize there was a second layer to the sculpture, so when I invited them to give the wheel a spin, they were surprised. They would then proceed to find the moire’s sweet spot. And when the moiré effect was doing it’s thing, people slightly freaked out. There have a been a few people who said that the Immersion Wheel was their favorite of all the projects, which is a huge compliment because there was a lot of awesome projects.

What I learned from the project & the class:

This semester I learned how to use the laser cutter in the ITLL. That was on my bucket list of skills to learn, so that was nice. During our aesthetics tour, I also learned about several aesthetics and movements throughout history that I wasn’t aware of.  There was a number of interesting fabrication techniques that I learned about from seeing other students’ projects. My favorite student was casting aluminum around water beads.

To do differently next time:

If I had to do the same assignment again, I cannot say that I would necessary approach the mission any differently. Often design is the discovery of creative solutions, so you need to explore ample directions to find the way forward. I would however shop for materials more wisely the next time around; because I find myself left with completely random products that I bought before honing in on my final design intent.

Thank you Dr. Hertzberg and all the other students who made this semester a great learning experience. I look forward to seeing more of your work in the future!