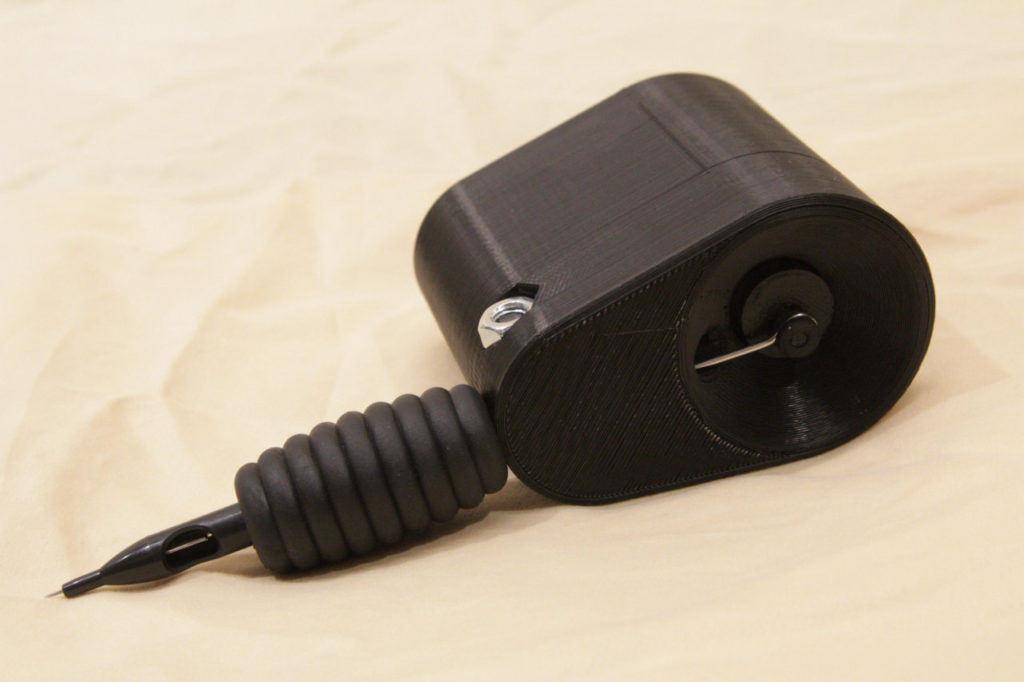 Overall, I was fairly pleased with the final product that I was able to produce. It didn’t quite live up to my expectations, in terms of what I thought I was capable of producing the first time around, but I have a lot of notes to take forward with me when I do decide to iterate on my design.

The general statement that I was, and still am, trying to make with this project is the power and importance of self education and the nature of DIY. The purpose of this project was not to take away from the artistry of tattooing, but instead to deepen the connection between people and their tattoos. It takes a lot for an individual to permanently ink something on their skin, and it takes even more to put one’s trust in the hands of strangers to deliver on such an important and meaningful piece of art. The personal tattoo machine acts to democratize the art of tattooing to the masses, and hopefully ease the minds of those who have concerns about either getting a tattoo, or tattooing themselves. This project is simply a step forward in trying to make another form of art and expression more accessible.

I liked the design of my tattoo machine, being that it was somewhat simple and functional, but I would like to make subsequent iterations of the device a bit more interesting in terms of design. And while I did appreciate the simplicity of my own design, I would like to add certain features to the device that would make it more user friendly, such as a rechargeable battery, variable motor speed control, and visual feedback to the user in the form of a LCD display.

The feedback which I received from expo ranged from intrigued, to shocked, to confused, and almost everywhere in between, which is about exactly what I was hoping for, in all honesty. It’s no secret that tattoos and the act of tattooing is still somewhat of a taboo topic, and I must say that I was quite worried about being berated by a random passerby. Thankfully, this didn’t happen, and it seemed like the majority of people were just very interested in knowing how it worked, and whether or not I had tested it yet, which again, is really all that I could have hoped for.

What Worked & What Didn’t?

The tattoo machine itself was functional, but the implementation of a high-torque, low-speed DC motor would have given me much better performance overall. Additionally, the cam component, which allows the tattoo machine to fulfill its most basic function (actuating the needle to move it up and down), needs to be manufactured out of aluminum and needs a set screw on its side to secure it to the motor spindle to mitigate any potential slippage of the cam on the shaft.

Moving forward with this project, I would like to take my lessons learned from this project and more or less do a complete redesign of my system. I would like to continue to make prototypes, being that building the tattoo machine was relatively inexpensive when considering what I predicted I might be able to make one for earlier in the semester, and with each prototype, I hope to improve the overall design and functionality of my project.

Where will this go?

For now, this project will sit on my shelf as the first in a long string of prototypes of the personal tattoo machine. But hopefully, one day, I will build a model with which I am proud enough of to test.