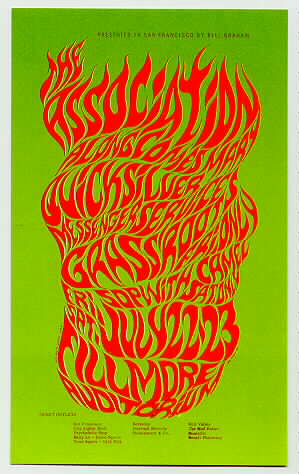 The 1960’s were a time of change and drastic social movements in the United States. The 60’s led to a sort of rebirth of America, one with more freedom in many aspects. This desire for cultural change led to new developments and techniques in music and art, among many other things. These movements were pro-peace and pro-equality and opened the minds of the American people to ideas like the freedoms to express sexuality, anti-government ideals, and openness to drug usage. Drugs like marijuana and LSD were said to have been a big influencer in opening the minds of the citizens. This freedom and change had a huge impact on the art and design world. Forms of Pop Art and Psychedelic poster art emerged in this time, thanks to artists like Andy Warhol and Wes Wilson. The new forms of expression in the 60’s led to a brand new way of thinking and creating.

Pop Art of the early 1960’s is associated with artists like Andy Warhol. Pop Art moved away from modernism, which favored themes of classic history and morality. Instead Pop Art favored common objects and everyday people. Artists drew inspiration from pop culture and mass media. Hippies in this time did not care about material things and the importance placed upon them. Pop art was a sort of reaction to this way of thinking.

(all art created by Warhol and found on google search)

Psychedelic Art was the most important art of the counterculture, as it came from those who were directly involved and supportive of the counter culture movement; it was not just adopted by them, they created it. Wes Wilson is the leading figure in this movement. He created a style that is now synonymous with the psychedelic and peace movements. His biggest contribution was the creation of the psychedelic font that became the craze and focus of this movement. His style was seen as taking inspiration from the previous popular art movement, Art Nouveau. There were spiral patterns, curved shapes, extreme detail and a focus on typography

(all art created by Wilson and found on google search)