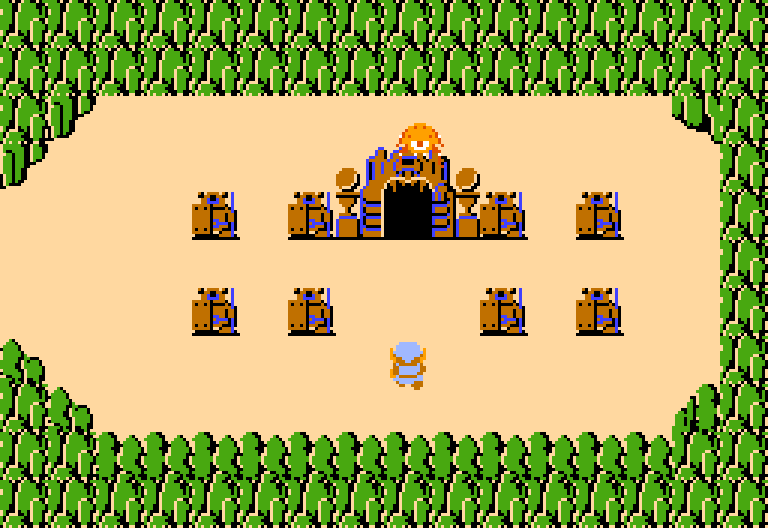 Aesthetic Exploration: The Legend of Zelda

The Legend of Zelda is a staple series when it comes to gaming. One of the most fascinating aspects of the games is that there is no real order to the games besides a rough timeline with no games taking place in the same time period of the Zelda universe (for the most part). The game still revolves around the playable character Link however but it is a different Link every game (excluding a few early games). This gives the game designers free reign to make each game look one of a kind while keeping the central visual themes and it can be seen in the varying aesthetics of each game.

In this post I will be looking at a few of the defining games in the series.

The original game, known primarily for its NES release had very small island feel to it with abandoned structures, beaches, forests, and small settlements scattered around. The technology held back any extreme aesthetic from being implemented but the game definitely has a unique feel to it.

Released on the SNES, the series began to take its stride with detailed sprites that brought more life to the game and defined iconic characters throughout the series. Deeper colors were used and an added game detention the dark world allowed the game to provide two aesthetics.

The explosion onto the 3D scene on the 64 really helped the game flesh out in the way it looked. The game starts off with link as a child and an overall cheerful playful aesthetic to the game. Later you play as adult link in a twisted dark world and a more grown up feeling.

Released on the Game Cube, Wind Waker has the overall clay-like design throughout the whole game. The comical feeling helped to look very good on the current platform and was improved further by an HD remake for the Wii U.

The Legend of Zelda: Twilight Princess (2006)

Released on the Wii, Twilight Princess was the darkest of games released. Characters were more humanistic and detailed than before with the general setting being dark and depressing, reflecting the terrible things that had happened to the world.

With Skyward Sword, the game moved back towards the colorful eye popping design of Wind Waker but with more detail and humanoid characters.

The upcoming game looks to be a mixture of Twilight Princess and Skyward Sword, but it is hard to say how the aesthetic will turn out. We’ll have to wait and see for ourselves.