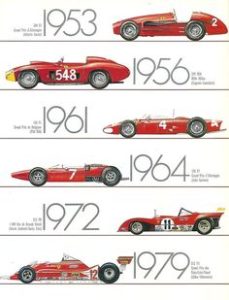 Aesthetic Exploration: The Evolution of the Formula One Car

Formula One racing has been around since the early 1950’s and the evolution of the sport, due to the rules and regulations that the drivers and builders must adhere to, has caused the race cars design and performance to change from year to year while keeping one thing constant. That is, speed. These cars currently have the mind blowing ability to go from 0 – 100 mph and back down to 0 mph in just under 5 seconds. And that is a direct result of technological advancements and endless redesigns that all had an impact on the aesthetic look and shape of the formula one car.  Lets start from the beginning with a look at a 1951 Alfa Romeo F1 car.

The original F1 design consisted of a small body, front engine design that limited engine size to 2.5 litres or less. This played a huge role on the design of the car due to the small engine, which in turn meant small, narrow body with rather skimpy tires to accommodate for the relatively low power output. While low weight is a common theme for all F1 cars, the earliest models did not take drastic weight saving design choices as seriously as models in future years would strive to do. Materials were still mainly metals such as aluminum which would later be replaced by composites of all kinds. While the car is very small there is nothing that appears to be particularly light about it which is what almost everyone thinks about when they see a F1 car.

Next up is Stirling Moss’s 1960 Lotus Climax F1 car. As you can see from the previous decade. The cars still have a relatively narrow body but instead they have taken a much wider stance and have utilized slightly wider tires. Additionally,the most notable difference is the engine placement which now has moved to the middle/rear instead of the front. This placed the driver at the very front of the car, moved more weight to the back which increased the cars handling and traction. In addition the idea of a “monocoque chasis” was utilized to save weight from added material while also providing increased strength. This moved away from the space frame design and the cars were able to drop weight with increased structural support.

Pictured above is a 1974 Ferrari 312B F1 car famously driven by Niki Lauda a three time world champion. By the 1970s aerodynamics played a huge role in increasing performance of the cars. The addition of spoilers, front splitters, aerofoils, and even induction vents (pictured right above the cockpit) all increased the cars overall performance and downforce which made the cars stick the ground like glue when moving at high speeds. The cars also continued to gain a wider stance from years prior and even wider tires. In addition, company sponsors began putting their own logos on the cars which once were cleanly painted with just a simple racing number on each side. Every design choice by this time period had aerodynamics in mind and that is very apparent in the much more edgy body style that once was completely cylindrical instead of flat. Safety also became a huge factor as the cars were getting faster due to increased engine sizes such as the flat 12 cylinder one inside the Ferrari above which led to even more design changes along the way.

This 1984 Tolemon TG184 F1 car yet again redefined the body style by introducing even more aerodynamic characteristics. The concept known as “ground effect”, where wing aspects were added to the sides of the cars to add even more downforce, gained prominence in the F1 world. In addition the cars themselves were all designed to hug the road as closely as possible without bottoming out on the track. The nose on the cars also evolved into a more narrow point and were rounded out to reduce drag. The F1 evolved to eliminate all edgy corners and replace them with round, smooth edges instead. Brazilian racing driver Ayrton Senna started his career in the car pictured above. If you are interested in the sport I highly recommend watching the documentary “Senna” which is a documentary on his racing career.

By the late 1990’s cars like the Ferrari F310 were a common sight on the track. Also new to that decade was the ban on turbo charged engines, so constructors once again had to make considerable design changes. These cars were narrower overall than years prior but also were slightly longer as portrayed by the top picture. Large air vents now became commonplace on the sides for better engine ventilation and intake. The body of the cars also began to take on a much more triangular shape, which is very fighter jet like.

Finally, in the 2000’s and beyond, the cars take on a very futuristic look that encompass all the elements of the prior decade but with even more curves and added aerodynamic features along the front of the car. Hybrid engines were introduced in 2014 with many new features including energy recovery.  The performance of modern F1 cars is frankly mind blowing compared to the sports conception in the 1950’s and there is no doubt that the evolution of the body style played a huge role in the performance gains that took place. These cars may be built for speed, but they also are pieces of art and are symbols of innovation and technological advancement. Seeing one on the computer screen, unfortunately, is a completely different experience than seeing one in real life. Especially if the car has left its stationary, unnatural position.