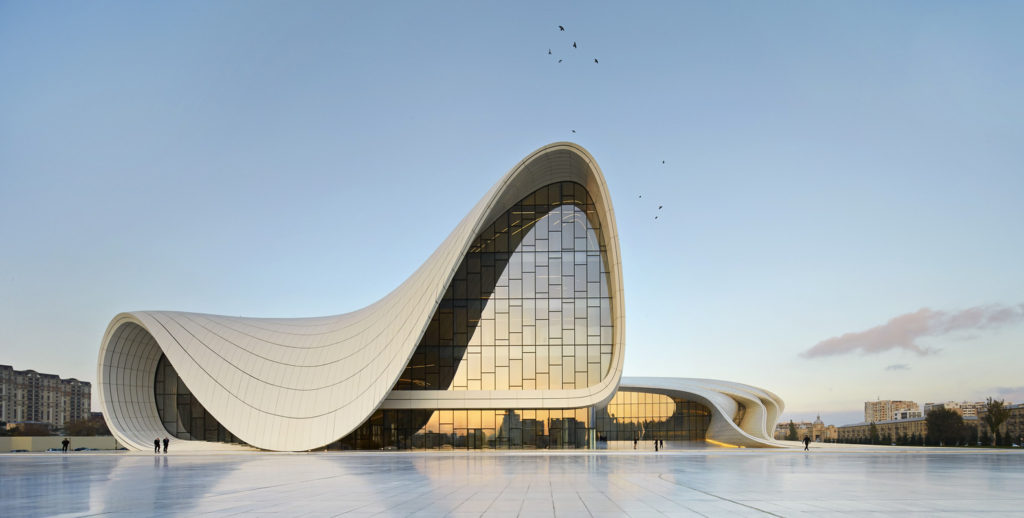 Contemporary Architecture which is also known as architecture from the 21st century, is both expressive dramatic and are modern works of art. The three architects that I am going to focus on are Santiago Calatrava, Zaha Hadid, and Frank Gehry. Santiago is probably best known for his work on the newly redesigned World Trade Center Transportation Hub. The inspiration for this project as stated from Calatrava’s website is “Although suggestive of motifs from many traditions (the Byzantine mandorla, the wings of cherubim above the Ark of the Covenant, or the sheltering wings on Egyptian canopic urns), the form may be summed up, according to Santiago Calatrava, by the image of a bird released from a child’s hands.” This is a stunning building that represents so much to the people of New York and around the world. The following pictures are also from the architects website.

The next architect, Zaha Hadid is possibly best known for her work on the Heydar Aliyev Center. This building is beautiful inside and out. I really like the organic curves that are used by the architect, the natural flow of the building is very pleasing on the eye. The following images are from the Architect Daily website.

The final architect Frank Gehry is responsible for designing the Walt Disney Concert Hall. This hall has a very specific style to it. As described by the LA Philharmonic “the 3.6-acre complex embodies the unique energy and creative spirit of the city of Los Angeles and its orchestra.” Not only is this building a representation of the orchestra itself it is also one of the most acoustically sophisticated halls in the world. The following images are taken from the LA Philharmonic website.