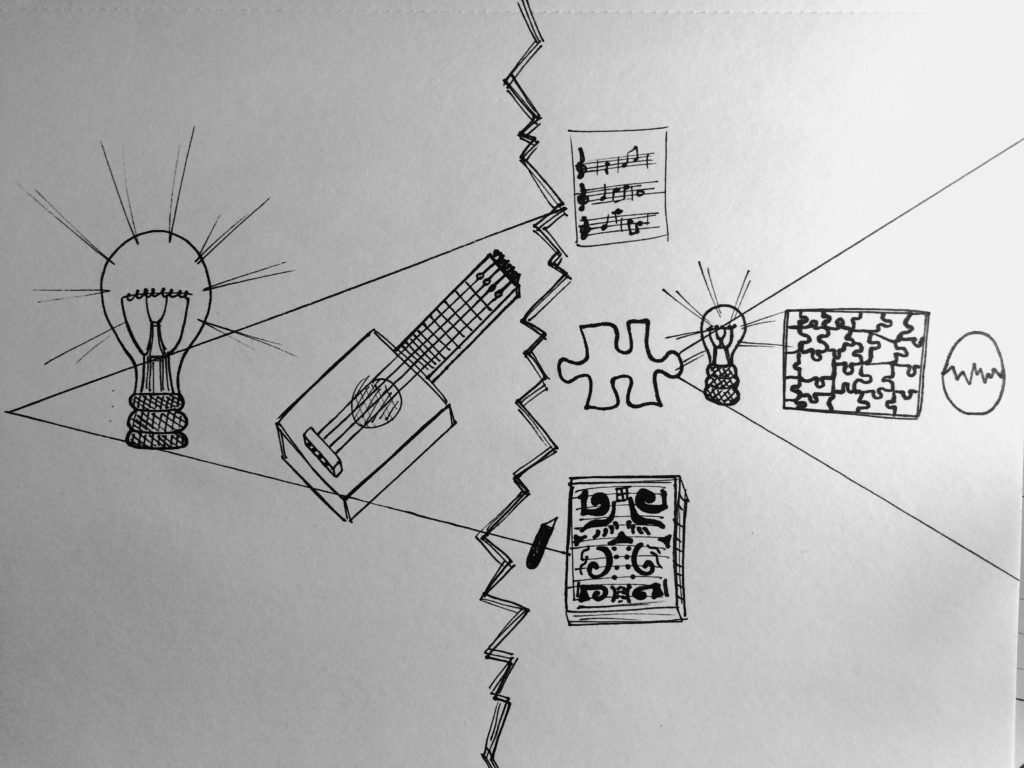 What I have learned from my upcycle project design process thus far is the following:

Let me start by explaining how my upcycle project has progressed from start to finish.  As illustrated in my diagram, I began with ideation, thinking about the things that inspire me most and solidifying an idea I both loved and thought few others would tackle.  I was set on creating an upcycled ukulele inspired greatly by the Landfill Harmonic Orchestra.  My main challenge in this design was designing functional tuners, but I worked to iterate, testing different materials and setups that eventually led to a solution I liked.

However, as I began to focus more on the aesthetic of my ukulele, I realized that there was an idea I wanted to explore further before solidifying next steps.  One of my ukulele considered aesthetics happened to be a puzzle aesthetic, which led me to a whole new idea.  Puzzles come together to create a whole, but what if I made a puzzle out of a puzzle?  Thus, instead of incorporating this aesthetic on my ukulele (for fear of sending mixed messages – too much in one place), what I have decided to do is create an upcycled puzzle with a Gaudi mosaic aesthetic.  While my puzzle will certainly be functional, more than anything, I hope to create an artistic statement recognizing the beginnings of a kind of infinite complexity.  My aesthetic is shown using google image results below.

This was a hard decision for me to make because I do love music and was deeply excited about working through some of my ukulele’s mechanical design challenges involving tuners and beyond; I definitely did not switch gears because of this.  However, the more research I did regarding “my” ukulele idea, I realized just how many people had already created similar contraptions ranging from cigar box guitars to tin violins.  Of course, there is nothing wrong with pursuing an idea that has already been tackled, but I have always been one to prefer the less expected, less practiced, more original route versus one that has already been defined.

Incredibly amazing to me was the fact that I had already built such an emotional attachment to my ukulele idea.  Seriously, this is fascinating…and a bit scary!  I imagine attachment as such may be highly beneficial in terms of motivation, but as far as those instances in which one must make objective decisions regarding when to cut product development for a specific product, this kind of attachment could be dangerous.  In business, for example, it is important to know when to let go of an idea (dependent on cost-benefit analyses) which can definitely be a hard thing to do when our ideas are often “our babies.”

Finally, I love that my constraints were able to inspire me.  For instance, in brainstorming ways in which to create a Gaudi mosaic aesthetic, I was forced to think about what I do have in terms of materials, eventually landing me on the decision to create a broken pottery look using painted egg shells.