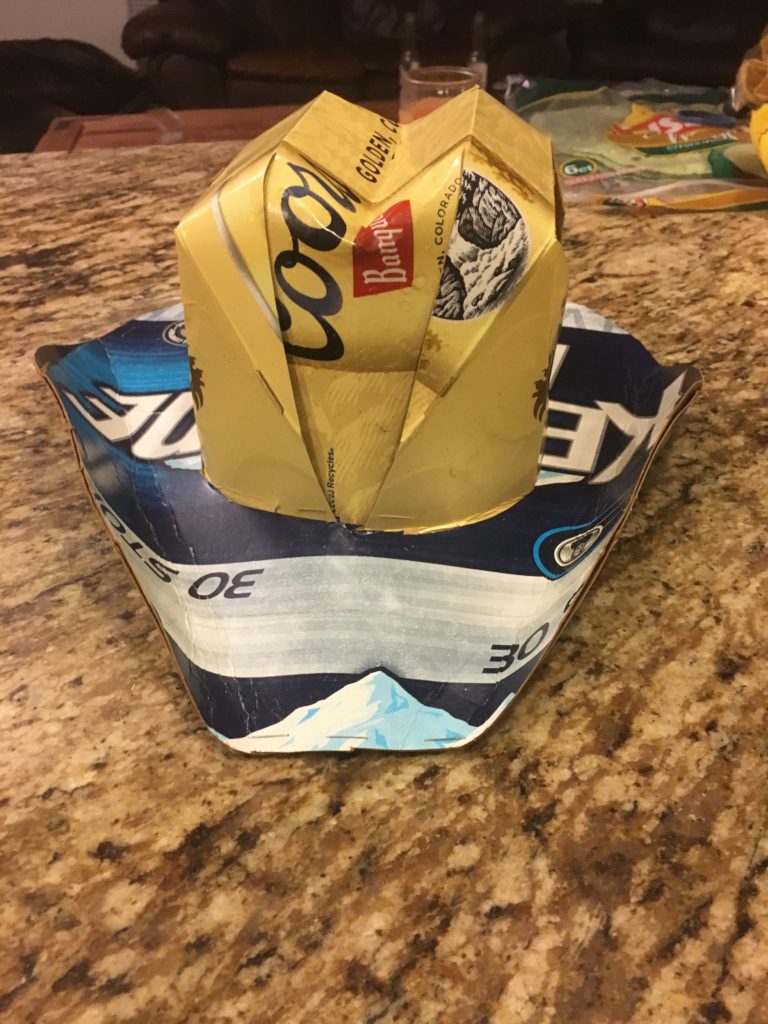 I had a very clear inspiration for this project. I got the idea from a cowboy hat I already own, shown below. I love this hat, and I knew I could make my own. I decided this would be a great venture for me to try for this project. I also poked around online and found that other people have made hats out of beer boxes just like me. I saw a lot that I liked and a lot that just looked like a heap of cardboard badly taped together. I wanted to add new flare and style to the hat I was making.

The majority of hats I saw were a lot like this one. I wanted to make mine more of an authentic cowboy hat, and not just random beer boxes put together.

My biggest artistic goal in this project was to not make this look like an elementary school craft. I really didn’t want exposed brown cardboard, glue dripping, tape all over, and ripped, torn cardboard. I wanted this to be something I would actually want to wear, and not something a kindergartner brings home to show mom. I wanted a clean hat with crisp colors and new looking cardboard.

The aesthetic I decided to go for was a redneck, country, tailgate, Toby Kieth feel. I wanted to do something that is more lighthearted and fun.

I used to love origami, so I knew I would have some familiarity when it came to folding, but I have never folded anything out of cardboard before. It was a new challenge for me. I used the hat I already have and kind of “reverse-engineered” the top part of the hat. I looked at where the cardboard was folded and the way it lined up. I used a box knife to cut away some of the box and make appropriate slits so that I could overlap the cardboard in the right spots.

It was hard to take pictures before this point. The way this was made was through one big fold. I was trying to hold it together and take pictures at the same time, but it didn’t really work well. I needed two hands to hold it together and staple it down so that it wouldn’t fall apart. This is the point where it really went from just a piece of cardboard to a hat shape.

One road bump I hit at this point was keeping the hat together. My original plan was to use glue. But as I was holding it all together and waiting for the first joint I had glued together to dry, I realized it wasn’t going to work. I would have had to find a way to glue all the joints and then hold the hat together while it dried. I also found that regular glue does not work well with the glossy finish on the box. I decided to abandon glue and go to staples. I had wanted to use glue because I figured that once it dried it would be invisible, and I was worried that the staples would stick out and be visually distracting. Luckily, it turned out that the staples blend in pretty well. I think it actually made the project better. Now none of the cardboard got soggy from the glue, and the staples will do a better job keeping it together in the long run.

The next step was making a brim. I didn’t have another box of the same brand or color, so I decided I would have to mix designs. Initially, I was worried that colors would clash, but they actually turned out to match about as well as I could hope for. The brim was also a challenge for me. A big concern for me was not having any exposed brown cardboard, and I didn’t know how I could do that with a brim. Then I had an idea to create two identical ovals and put their brown faces together, so that colorful sides of both were exposed.

This was the part where I had my biggest setback. The first box I cut for the brim was nowhere near the right size. Luckily, I had another thirty-rack sized box.

With my next box, I knew I would need to cut it a lot bigger to make a real looking cowboy hat. I’m actually a little glad that I messed up this first box and hat to use another, because I think the color scheme benefited.

I used this box to implement my double-sided brim plan. I cut out two near-identical pieces to match up. On the top one, I had to cut out a whole the size of the hat frame so that I could slide it over. For the bottom one, I left it fully intact and just matched it up with the one on top.

After I had these lined up, I had almost completed the hat. I just had to staple them together, and then cut a whole out of the bottom for a place to put my head.

I also went around the brim and cut off any spots where the two ovals didn’t line up exactly and there was cardboard exposed. I think this was a big component in making it look less like a craft.

Finally, I just stapled everything together to make sure it would stay. This is the final piece.

I fell short in one aspect of my functional goals. Unfortunately, I made the hat too small and it doesn’t fit my head well. However, this was a design choice I made. When I originally folded it together, the folds were a little loose and sloppy. When I tightened them up to make it look better and stay together more, I unknowingly made it too small for my head. I’m really not too upset about it though. This was my first time making a hat like this, and I knew I would make some mistakes.

I am very pleased that it stays together. I intended this to be more of a display piece than an actual hat I would be wearing often, and it is sturdy enough that I don’t think it will be falling apart anytime soon.

I am very happy that it didn’t come out looking like it was whipped together for a craft fair. There is minimal exposed cardboard, no glue spots, no visible random tape, and no loose cardboard.

I am also very happy with some of the finer points of the aesthetic. Right along the top of the hat it says “Golden, Colorado.” There is also a logo on the brim that says Golden. There is a can right up front, and matching logos on the side of the hat. The way that the designs and colors line up worked out really well. It is a fun, party-themed hat that in an interesting relic. I think I achieved the aesthetic I was going for.

I will probably display this hat somewhere in my house. This was kind of like a practice run for making these. It turned out great, but not perfect. Maybe I can try again and make one that will fit my head and I can wear at parties. One of my roommates saw me making this and mentioned that he wants one. It was fun to make, and I can easily get more materials and make more of these hats if I want to.