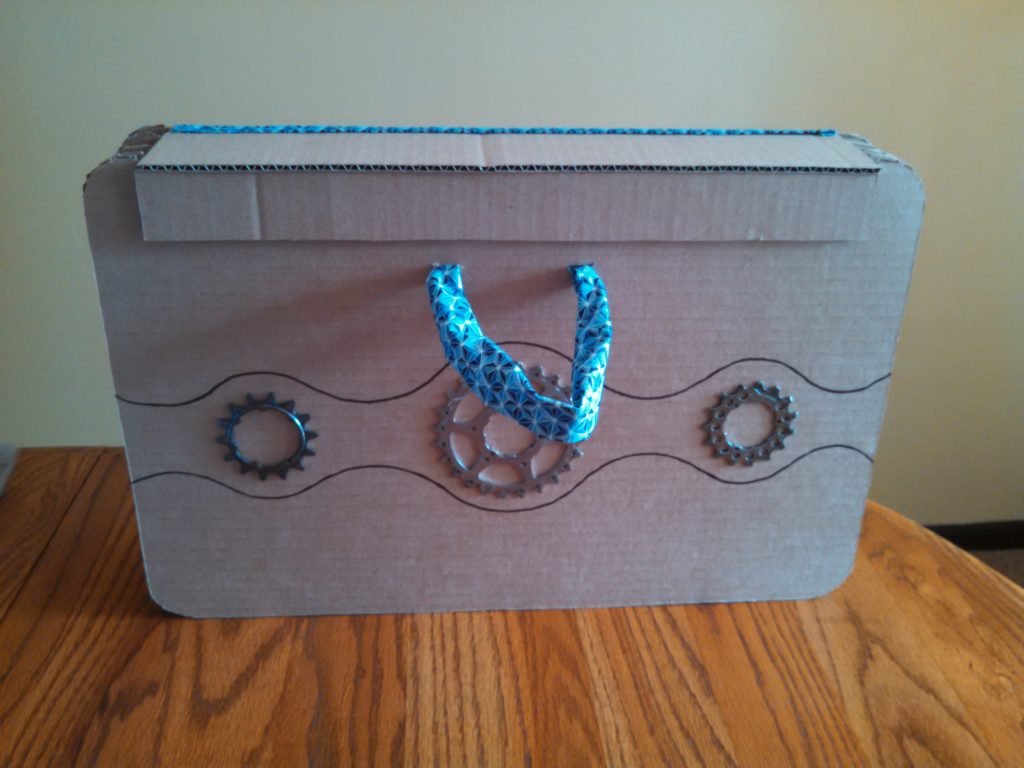 Here we are at the end of the upcycle project, after many mistakes and design looping for many of us. The following is all of the steps and thoughts contained in my project: the cardboard laptop case!

I did not google this idea before I began (honestly!) but Fig.1 is something I found that is closest to what I’ve done.

When I started the project, I began with cardboard lamps (Fig. 2). I wanted to make something functional, and I wanted to use the laser cutter. The internet held some of these kinds of ideas:

Then around the time of our second upcycle blog post, I saw that other students were also pursuing cardboard lamp creations, and I wanted to go for something a little different. After I had bought my new, larger computer, I had been bringing my dad’s old laptop bag to work with me, and had gotten some of my coworkers poking fun (in a quite meeting, cue the loud sound of Velcro being unleashed). Thus the idea was born. A new laptop case. The aesthetic vision I started with was a sleekly laser-cut cardboard design, with the box constructed in layers, as in the lamp in [2] above. I also wanted the design on the front to be a laser-etched photo. I figured you could do this in wood, why not cardboard (Fig. 3)? Then as the project continued and I ran into road blocks, my design vision changed to more minimalist (Fig 4). If I couldn’t do it the hard way, I would do it the chic, simple way. I didn’t want to make it too busy. I also ended up adding a bit of steam punk in there. The vision was a mash-up of two aesthetics in that way.

In terms of function, the following features were necessary: durability, handles, and a lid. Seemed simple. Never is (you’ll see).

Here is the design loop I actually did:

Figure 5: Final design loop with many trials and tribulations

I mis-understood the design loop blog entry the first time. It was supposed to be what you though the design loop would look like for the whole project, not where you were at the time. Regardless, I would say that this finished loop differs from what I guessed would happen in that I think the CAD mock-up prevented me from messing up as much as a would have. At one point, the distance between the computer holders was an inch too short! But I caught it in time. This project has been the most mistake-free on for me in a while. Maybe because of my simplistic art goal.

1) begin the mock-up of the idea in the Solidworks program (Fig. 6). The holes in the top of the box here were for the handles of the case, where I googled “purse attachments” in google, and got a photo that looks like Fig. 7. I thought this would be easier than gluing the handles between some of the layers, as I had first thought.

2) Receive the bad news that I can’t laser-cut cardboard at the ITLL. Fill out an application to the BTU lab in ATLAS that Sara P. mentioned (thanks!), where I can maybe cut it instead. This piece is key for a really polished look.

3) realize that even if I can cut it out with the laser-cutter, I won’t have enough time before it is due to assemble and troubleshoot. Etched design idea goes down the tube. Also, I realize that the holes for the handles will look sloppy if I cut them by hand and measuring, so I choose a new handle design, through the top and back of the box, as it is in the final.

4) start work on cutting the pieces out by hand using a box cutter. A friend of mine at work, Evan C. suggested that I didn’t need solid layers to construct my box, I could use spacers between layers (see Figure 9 below). First I cut out the pattern for the pieces in the laser-cutter on paper (Fig. 8), then I traced them on the cardboard and cut out by hand:

d) the top pieces for the latch (not pictured)

Ah! After setting up all the cut pieces prior to gluing, I realize it’s too short to contain the Styrofoam blocks, so I cut out 6 more corner and side spacers.

5) Glue the back of the box, and all the spacers together.

One of the final steps was gluing the top on. I still needed to decorate it and install handles.

7) Try to burn designs into cardboard with a soldering-iron instead of laser-cut. It will take forever and look sloppy. Can’t do that. Find the gears in the component design box leftovers in the Idea Forge (Fig. 12), and go back to solid works to design the round pattern around them, cut it out and trace it to the front of the box.

Figure 13: Trace cut-out of design around gears, made in Solidworks and cut out with laser

8) glue everything together and install the closing latch magnets (the super-strong kind, found in my basement)

functional: The laptop case is pretty close to what I wanted functionally. It is strong and sturdy, which is good, and the top latch with the cloth hinge works well.

artistic: I really wish I could have used the laser cutter, because it would have been a bit sleeker, and I could have put in the design I wanted. It’s also a bit bigger than I expected, mostly because I have a large computer. Looking back, one more thing I could have done was to make the top latch a bit more artsy. Perhaps just not included the downward flap, so it looked more streamlined. I liked my use of gears, I think that was pretty novel (and upcycled!) and I’m glad my sewing skills came in handy.

This is a fairly sizable box to carry my computer in, and if it rains that day it will be ruined. I think there would be a less strong, but prettier way to do this, and many companies have with more expensive materials. Actually, I’m not sure if carrying this around would embarrass me or not. I guess I’ll just have to find out, better luck next time? Realistically, it will probably live in my basement until class is over.