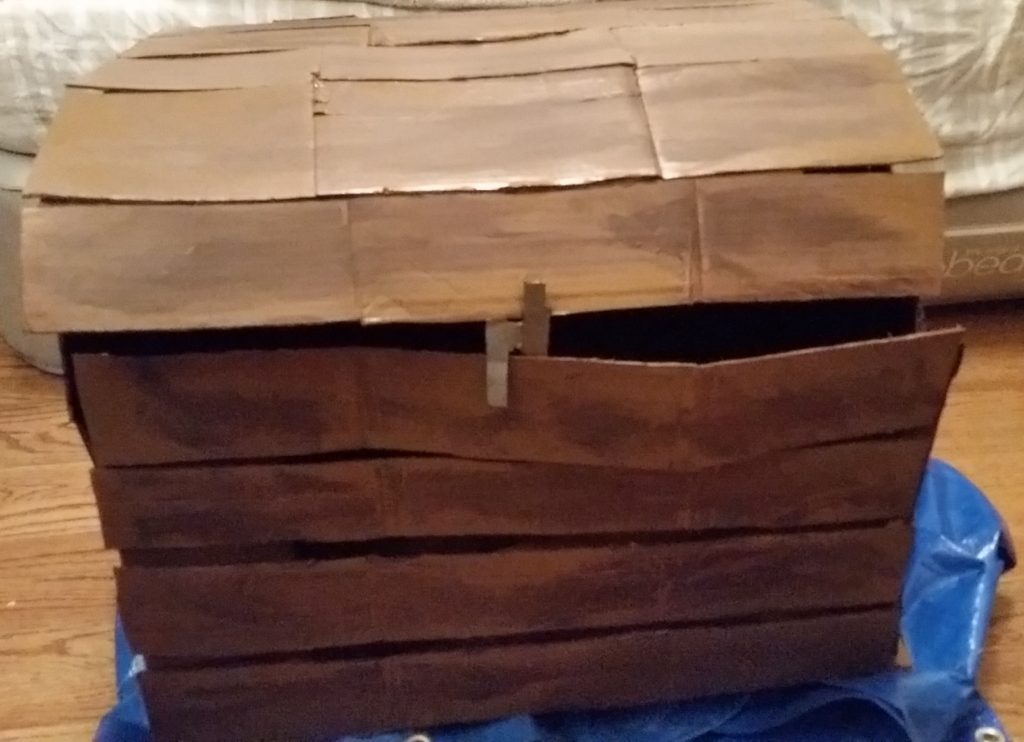 One man’s trash is another man’s treasure… chest.

I decided to create a treasure chest out of cardboard boxes laying around my house for my project. At the brainstorming phase of my design process, I had decided to focus on utilizing a single upcycled resource as an artistic and functional statement. I settled on cardboard (previously, I wanted to use reclaimed wood to make a totally different project, but I did not have the tools to work wood). At the beginning of this project, my roommates were in the process of throwing out a bunch of boxes and I thought, “why not make use of these?” I got my inspiration for a treasure chest not just because of the saying above but also because I needed a storage container for my bedroom that conforms to the room’s nerdy aesthetic. I originally thought to create the treasure chest with a steampunk aesthetic in mind like below.

I decided against that aesthetic as it took me too much time trying to figure out how to create a mechanism with cardboard that works like above. Instead, I tried to focus more on realism: replicating what an old, wooden treasure chest might look like. I focused a bit on functionality as well: on how much the chest could store as well as how the trunk cover would operate.

Next up was prototyping the project. I gathered about 4 boxes worth of cardboard (each box had about 6 sq. ft of usable cardboard but I prioritized lengthier pieces). I also gathered 2 rolls of duct tape and scissors.

This was my initial prototype. Luckily, I found a box that had a cover similar to a chest/trunk so I utilized that side as the side with the hatch. The rest of the chest was comprised of pieces of other boxes stuck together with duct tape at the sides. I spent a lot of time cutting up “planks” for the cover and figuring out a way to make the cover stay in the same shape. Below was my solution with lots of duct tape.

I used little rectangles of cardboard to stabilize the gaps between lengths of the plank. I then wrapped those with duct tape.

Although the initial prototype was functional and passable aesthetically, I wanted to go further with it. I wanted to make the entire chest look like it is made out of wood instead of cardboard.

For my final design, I tried to utilize the plank technique for more of the chest. I cut out the front and turned it into planks, with stabilizing planks on the inside taped perpendicular to those planks. While that worked well for the front, utilizing the same technique for the other sides was tricky as most of the chest assembly was attached to those other sides.

I also decided to use primer, spray paint, and acrylic paints to mimic the appearance of wood and wood grain on the exterior of the chest.

First side of the chest spray painted brown.

Sides of the box after the first coat of spray paint and primer were applied.

After that, I used varying shades of brown acrylic paint to create the appearance of wood grain on the chest.

My color palette (the silver is used for the latch on the front).

Close up of wood grain pattern.

I am pleased with the end result! Although the treasure chest, aesthetically, looks shoddier than I thought it would turn out, the ‘trashiness’ adds a certain charm to the chest that I hadn’t anticipated. I feel as if the chest had been ‘broken into’ almost.

Functionally, the chest does exactly what it’s supposed to do: open, close, and store things. And it does so without falling apart!

As for the future, I think I might toy around with adding some steampunk peripherals to the box: I was thinking of adding some sort of gear mechanism to the front that holds the chest closed.