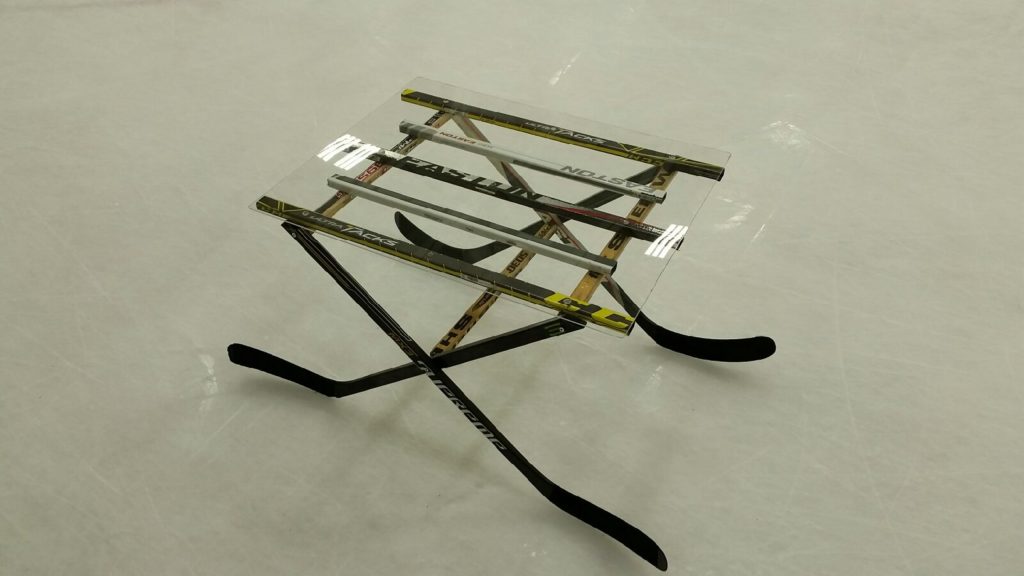 As a hockey player and sports fan, I have always loved the sports aesthetic. Whether you consider it to be sports bar-like or a man cave, I have Colorado Buffaloes, Green Bay Packers, and Wisconsin Badgers logos all over my walls. However, I do not have any sports-related furniture. How cool would it be to have a piece of furniture to go with all the other sports stuff in my apartment?! That was my thinking when I stumbled across the following images.

Originally I was thinking I would make my very own hockey stick. I would use some pretty, lightweight wood and carve a custom shaft and blade that would fit me perfectly. I started to Google “Homemade Hockey Stick,” but what I found sparked a new inspiration. The following six images were found on Pintrest. However, I am not a member, so I was unable to secure any further information..

However, the image I kept going back to was a side table with a glass top and hockey pucks. I really liked the addition of pucks as separators between the hockey stick-frame and the glass table, it truly completed the aesthetic. The image that really grabbed my attention was this one:

In fact, I drew up my own version of it, which I was intending on following:

However, early on, I realized that the limiting factor would be the number of hockey sticks I can salvage. Luckily, over the week and weekend from February 2nd to February 6th, we had three club men’s hockey games (CU vs Arizona and Arizona State) and three club women’s hockey games (CU vs Minnesota and CSU) at the CU Rec Center ice rink. I was able to collect six sticks at those games. Plus the rink staff heard of my project plan and they offered to donate a few broken sticks as well. However, I was unable to to secure enough sticks to build the side table in my original drawings. After talking with my brother, Zack, about the project, I decided to build a table with crossed hockey sticks. The new design is shown in the following image:

I started the upcycle project thinking I would carve a specialized and unique hockey stick out of wood. However, when I Googled, “Homemade Hockey Stick,” I was inspired by what I saw. Ever since then, I’ve been working on making something out of broken hockey sticks. The key constraint has was the number of sticks I could collect, as shown in the design loop depicted in the following image. It was pretty tough because most of the donated broken sticks were broken on the shaft, so they were usable in varying lengths. I also collected 4 sticks that broke on the blade, which I taped over for structural integrity and cut at the longest possible length as one was also broken high on the shaft.

Once I collected the hockey sticks, I had to cut them and assemble the table. Briefly, here’s how the build process went:

2. Collection of cut sticks in the ice rink on Feb. 10th:

3. My brother, Zack, helping me assemble the table on Feb. 12th:

5. Acquire and cut acrylic top. In this step, I realized that I would not be able to use the pucks in the corners with the acrylic top because the acrylic bends too much. The acrylic would be placed directly on the hockey stick ribs as shown here:

6. Cut and place one last stick on the table top. Brad Thompson donated the white Easton surrounding the middle beam.

7. Drill holes on the top beam for acrylic top. Then promptly break the acrylic top with one of the screws.

8. Buy pads from McGuckins to place the (new) acrylic top directly on the sticks. Photoshoot on the ice to complete the aesthetic:

9. Enjoy final product (me in the picture for scale):

Obviously the design and construction processes did not go ideally. There were dead ends and iterative loops to achieve the final product shown in the last image. For example, I was able to salvage some acrylic (two different pieces, in fact) but unable to salvage tempered glass, which was in the original design. Consequently, I could not keep the original design of placing four pucks in the four corners, as I saw in the inspirational table from Pintrest. I also had to trash the idea of drilling the acrylic top onto the frame, which would have made the entire table one full assembly. This made the acrylic top rest on the frame but not fixed to the frame. Functionally, the table meets but does not exceed expectation. It is level and sturdy, but will not hold as much weight as the other design would have. I will be able to use the table as a resting plane for glasses, plates of food, books, and  TV and video game controllers. However, the table would not hold strong if someone were to sit on it, The crossed-sticks design puts too much stress on the screw in the middle and two wooden stick cross pieces, which would be the first to fail if too much weight were placed on the table top. Artistically, however, I believe this table meets the aesthetic goals I set out for. When someone looks at this table, the first thing that comes to mind is hockey. It would have been cool to add the pucks to the top to truly complete the hockey aesthetic, but this product does not lack in the hockey appeal.

I believe I will try again someday, perhaps soon. And I may even improve this exact table if I am able to find some tempered glass to use as a top. If tempered glass were used, I could place the four pucks in the corners as spacers. I imagine the table would be even heavier, which would add to the stresses on the crossed hockey sticks, however, I believe the table would still hold. For now, the table is in my living room. I might donate it to the ice rink at the rec center so more people could enjoy it. Otherwise, it would fit perfectly in my mom’s basement back home. I haven’t decided what its final destination should be.