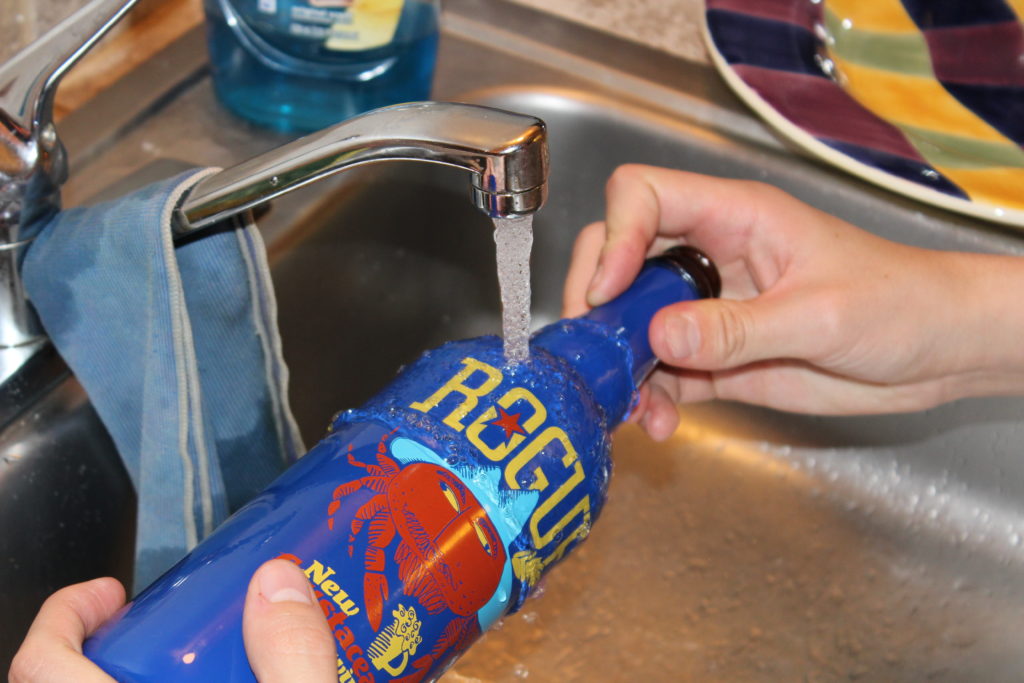 When I started to try and think of an upcycle project, the first thing that came to mind was to use items that are often found in my house. One of my roommates Peter, decided he wanted to build his own home brewing system several months ago. However, Peter never fully took on his project and this resulted in about 20-30 beer bottles laying around the house. So I decided I would like to use the beer bottles as my upcycle material. Next was pretty lucky, one of my friends Shawn Sprinkle told me that he had taken a similar approach in the Design class a couple years ago. He had made glasses from beer bottles as his upcycle project. So my inspiration came from looking at some of Shawn Sprinkles work. However I decided that I would like to do something a little different, so I decided to set out in making shot glasses and candle holders from beer bottles. To see Shawn Sprinkles report, click here. I decided to copy Shawn Sprinkles process because I really liked bottles finish he achieved in his pictures. In order to do this I asked for some help from Shawn in how he set up his operation and what tools he used.

The tools were simple:

1: Glass Cutter & Hex wrenches to adjust the cutter so that I can make specific cuts.

2: Heat source. I decided to use a candle & switched to boiling water

3: Cold source. I used the cold water from my sink.

My Vision:  I really wanted to make something that I would use continuously for the rest of the semester. As it is senior year and the last semester of college, I decided to make a shot glass with the top of the beer bottle necks, and make a candle holder out of the rest of the glass. My artistic vision was to keep it simple, I wanted to give it the aesthetic feel that it was a college students glass.  In order to do this I decided that recapping the bottle would help give it that feel. I also decided that I wanted to use a bottle that was more colorful and would give it a more artsy feel. Rogue bottles had the perfect coloring and volume that I was looking for.

My design process followed my loop seen above. I started with an initial thought of making the beer glasses. In order to make this happen, I went through some research, talked to Shawn Sprinkle about the best way to tackle the project, and then it was onto the building, testing, and either entering the loop or exiting with a finished product.

The pictures below show the building part of my design loop.

The image above shows the glass cutter, in order to get a good cut I applied a lot of pressure on the bottle as I rolled it over the small blade seen above.

Next I heated the glass up with a candle. With the Rogue bottle having a coding, this ended up setting some of the enamel on fire, so I switched to a process of pouring boiling water over the bottle.

Next I cooled the bottle down by applying cold water on it from the faucet.

Eventually this process resulted in the bottle braking at the cut line.

Unfortunately, the rogue bottle didn’t create a perfect cut line. So this would be one of the moments that I reentered the design loop circle that I have laid out above. I decided that I would test out the process above with a less robust bottle. The Rogue bottle enamel really messed with the process of making a clean cut.

Below shows a regular beer bottle cut with the process used above.

Finally, I used sandpaper to sand down the edges so that the glass wouldn’t cut anyone upon use.

The above picture shows the head of the bottle recapped, and the bottom bottle full of water. From here I decided to exit my design loop, however upon further examination of the rogue bottle I have decided to continue to work on this project, and I will be updating this blog post as I go on.

From here, l would like to figure out a better process to get a smoother cut on the Rogue bottles, as the Rogue bottles portray a different aesthetic that is more pleasing to me than the regular brown bottles commonly found.

I ended up achieving my functional goals laid out, as the shot glass I created works perfectly in that it will hold liquid and will not cut the lips of the user. That being said, I definitely didn’t achieve my artistic goals. I wanted my aesthetic to be more artsy and colorful, and in order to do that I will need to continue to improve the process of the glass cutting. However I did manage to keep it simple, and I really like the sleek look of the bottles displayed in the final picture. As I go forward I will continue to refine this artifact until it exceeds my artistic goals. I would also like to make several of them, so that I can give to gifts to friends and family.

I will include a video when I retake video.