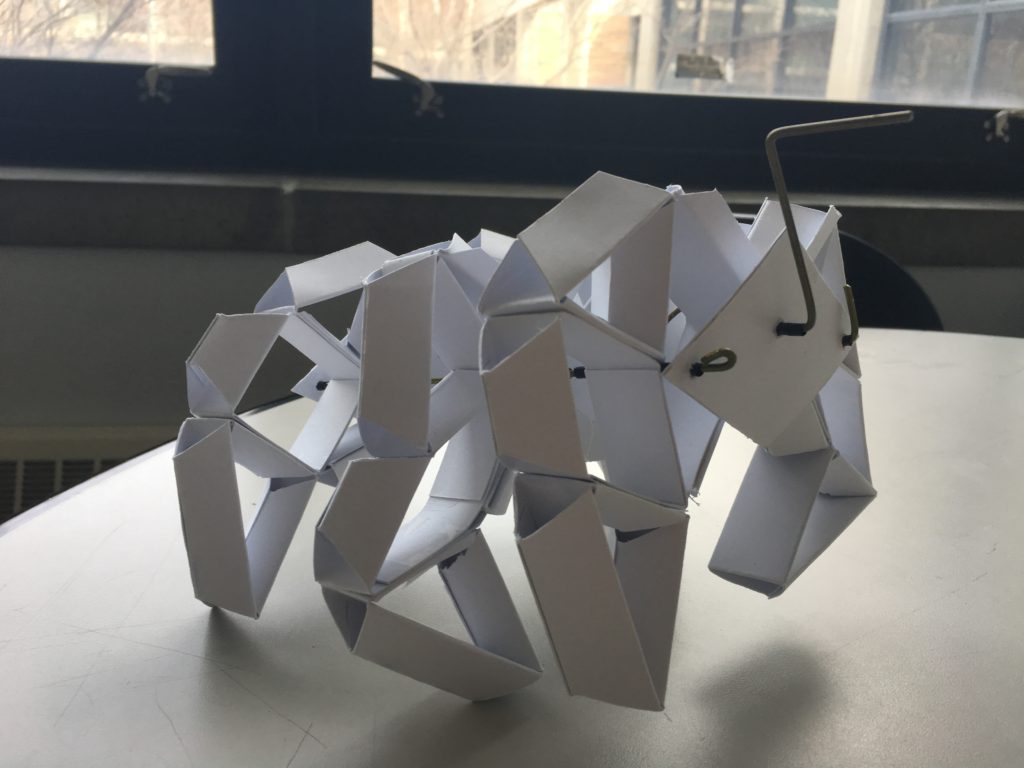 Inspired by Theo Jansen’s Strandbeest project, I set out to create my own functional desktop Strandbeest. I wanted the creature to be powered by a crank, made out of paper, and resemble the aesthetic created by Jansen but with my own more modern industrial twist. For those unfamiliar with his work here is a brief.

In 1980, Jansen began with 1500 combinations of 11 linkage sizes. Using a new technology at the time, a computer was utilized to dwindle the different configurations down to just one golden combination, the “eleven holy numbers”. These numbers allowed for the most efficient, elegant, and stable motion of what would thereafter become the locomotion of the Strandbeest. Watching his PVC creatures move both invokes curiosity and mesmerizes. They appear to move across the beach eloquently and naturally, making it difficult to remember that these actually aren’t living creatures or an alien from beyond.

The “eleven holy numbers” and Jansen’s design are available for public use. This has allowed for what he considers to be the ability for his creations to multiply. Anyone can build one, and anyone can make it their own. You can even find desktop versions in model kits for purchase of all sorts of varieties.

Rather than spend my hard earned money and pay for one of these kits, I have opted to build my own out of everyday materials. Below is someone else’s attempt at building their own mini-Stranbeest using what look like could be Popsicle sticks or another form a thin hobby wood. He is using dowels to link everything together.

Wood would have made for a nice strong frame, but I was looking for a material with a bit more room for aesthetic expression. Paper I determined was easier to work with and form into a unique structure. I could purchase cardstock (120lb) paper for cheap, use some old close hangers, and some straws to make a still strong, yet more aesthetic creation. Looking at the design process, ideally, I was hoping for it to be so well planned and thought it that the process would be linear. Point-a to point-b. So I sat down, all my supplies purchased, everything planned out, and a prototype leg even made. But, as design goes, deviations from my planned path arose, and I was forced to rethink my route. I had my end goal, and my starting point. I believe that in design, you have at minimum a vague idea of what you want to have as a product. It can be as vague or concise as you desire, but it is still an end goal. You may deviate from that goal momentarily, but you always end up back where you had originally planned. My original plan consisted of 6 pairs of legs, and possibly the ability to move using wind. On the way to my goal, I had found that the process of construction was much more time consuming that I had originally planned. This led me to make the choice… suck it up and push through the extra hours of work or… decrease the number of legs in half and do a set of three. I chose the latter. The next hindrance I came across was in the design itself. I had found a design online for the legs. I did have to adapt to my own need a little, but not too much initially. I then realized that this design was missing some key components to my own design goal, and had some extra components that my design did no require. So… I had to come up with my own solutions. Thankfully it was not too much effort, I did make a prototype which led me to some epiphanies and insight on the design.

construction of the legs was slow (about 7 hours total) but very rewarding once completed.

With these as the final result. I had noticed that some of the support structure interfered with the assembly, so some cuts were made and everything fit pretty nicely. It wasn’t until the next step that I started noticing something wasn’t quite as it should be.

You can see the interference here, as well as some tearing at the crankshaft. I may go onto try and cut some pieces out to allow for movement, but after all the effort put into the crafting of this, I am just going to enjoy it as a nice sculpture to serve as a token of my work. I met my artistic goal, I do wish that I made the body a little larger to hide all of the internal workings, but hindsight is 20-20. I am also hoping that will one last push of effort I can meet my function goal and get this guy’s legs moving. Now that I have made my upcycle, I want to start hunting for good 3-D printing designs online and 3-D print myself a little crawler to tinker with. In my research I have found a couple that I like and I would love to get one printed for myself. Regardless of its functionality, I am proud of my work and this guy will always have a home on my bookshelf.