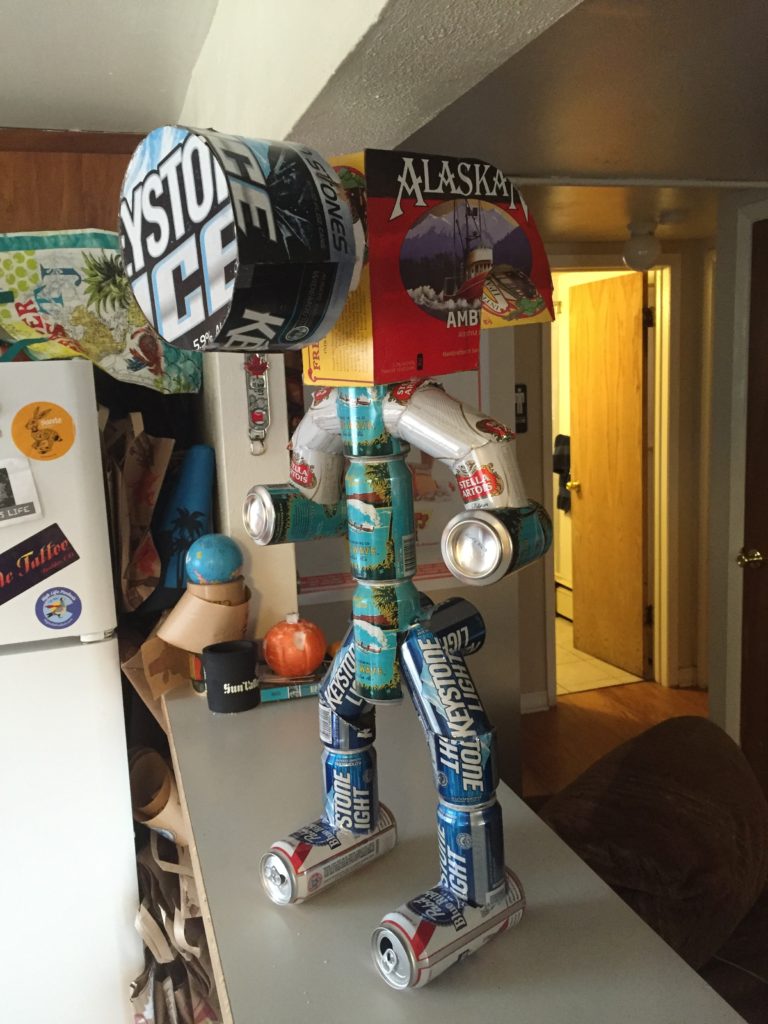 One of the most common things that is thrown away in my house of seven people, is beer cans. I began collecting them as soon as I heard about this project but did not yet know what I wanted to do with them. I came up with the idea to recreate a statue I remember seeing in a park when I was a little kid. It was about a 20ft foot tall, all red, all metal rendition of a hammer with arms and legs. This statue called “Big Red” by Ed Benavente is much to big to re create in its original size so I made a small scale model completely out of beer cans and beer boxes. Below are three pictures of the statue.

The aesthetic I was trying to achieve was the aesthetic of beer logos/cans. I have seen many small trinkets, toys etc… that are made entirely out of beer cans or material with beer logos printed on them. So using both the childhood memory and the beer can aesthetic I was able to set a clear vision for what I wanted to do. The cylindrical shape of the can is perfect for the arms, legs, hands and feet which is where I got the inspiration for the material from. The head will have to be made out of beer boxes due to its flat sides.  My goal is to create a close resembling scale model, that looks well done, and that will be able to stand up on its own.

My design loop started really with choosing a material and then using the internet to find inspiration and ideas about what I wanted to make. Once I knew I wanted to make some type of statue, and then specifically the statue I remembered seeing from years ago, I began sketching it out using the “beer cans” I chose as my recycled medium. This gave me the idea that I could create 80% of the statue completely out of cans if I could successfully cut the cans at different angles to creates curves and bends. Once I had it roughly sketched out, I began cutting cans using pliers and a dremel. I discovered that it was possible to create the angles I sketched out without too much difficulty so at that point I knew I needed to refine my sketches because the design seemed feasible. I then began building and got pretty far even while I was just testing my material out. I used various cans all with different heights and diameters to then add some clarity to my design and further plan out how large it needed to be and what cans I would place where. I then just started chipping away at it starting from the bottom. To get to this point after just a few hours.

My design then further evolved into the following.

I used a dremel, hot glue and some scissors/pliers as my only tools as well as a ruler and some markers. About halfway through my structure I decided to only use certain beer cans for different pieces of the body such as the feet, arms, legs, etc… that way I could use multiple different brands but keep a simple patter and size. Once the body was complete I began tracing out profile views of the hammer head shape I needed to create. I made the circular part of the hammer head out of two circles for the faces and a narrow strip to connect the two together. The hot glue worked great and really held the pieces together while maintaining the boxes rigidity. A fear I had in the beginning was that the hollow head piece would not be sturdy enough to support its own weight, thankfully this did not turn out to be true and the head piece is one of my favorite parts of my statue. After about 10 glue sticks, 15 cans, and four different beer boxes I completed the statue…

In the end I think my statue achieved the beer can/logo aesthetic while also achieving my structural goal of being able to stand up on its own. In the future I would really like to create another statue out of beer cans but one of a nail running away from this hammer or maybe with its hands up in the air. I think it would be a hilarious addition to this piece.