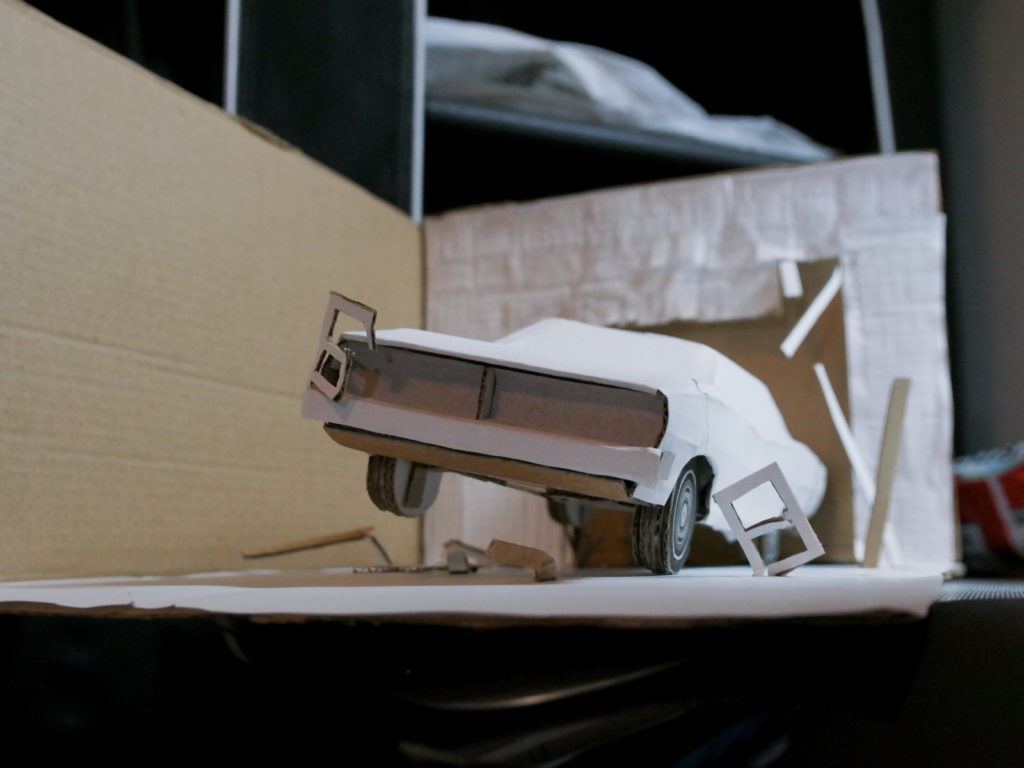 For my upcycle project I’ve decided to use cardboard (and lots of paper and glue) to recreate this scene from 2005 film “The Dukes of Hazzard”. The 1969 Dodge Charger is my favorite classic muscle car and “The Dukes of Hazzard” is one of the first movies I’ve seen. The car’s “boxy” design makes recreating it with cardboard easier, also I have plenty of cardboard. I decided the final product is not going be colored so the focus is to get the shapes right.

The idea is to make a “bone” structure like the airplane wing first with these 3-view pictures, to make sure the shape is as accurate as possible, one problem I have working with cardboard is that the cardboard can’t be cut with laser cutter, so I have to cut everything with scissors and knifes, thankfully I have a printer so I can just paste those 3-view pictures on every cardboard I’m cutting

Again, cutting these with basic tools is quite time consuming and not quite accurate,  pretty soon after finishing the “bones” I realized keeping the shape of the left part of the car looks like the right part is going to be a big challenge…

So that I did next is a lot of trimming and by cutting and adding more cardboard layers. this part is finished on Feb 12.

The next 2 days were spent putting on a skin with paper, there are 2 shoulder curves on the car so the connecting part is a bit rough, that’s also when I decided to not recreate the U shapes on the doors and the hood because it wouldn’t work well with the paper wrap

And that’s the wrap done on Feb 14, next up is some small details on the car, the tires, and the smashed barn door, I think by Friday I will be able to finish this project and maybe think about what to add next.

I made the wheel from 20 layers of cardboard, cutting them took 2 hours…

And that’s the final product on Feb 16, made the “scene” with cardboard and glue, I used the stapler to hold the car in place.