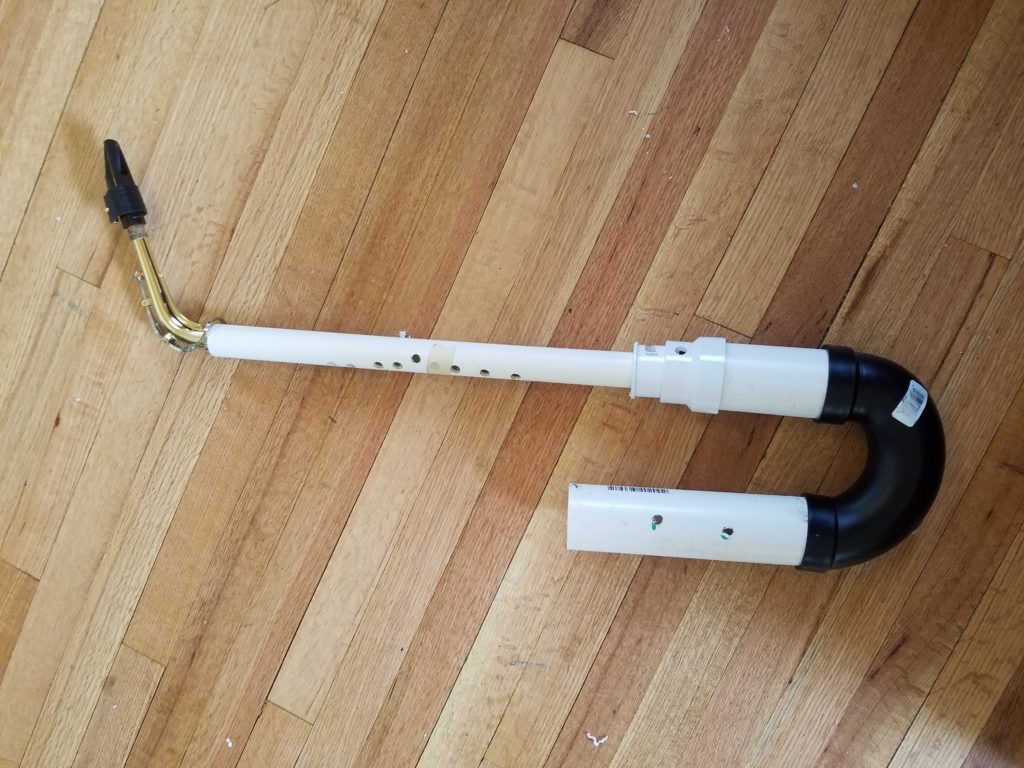 For my project I decided to make a saxophone out of upcycled materials. I was having a lot of trouble deciding what I wanted to create for this project until I thought back to a recent concert that I had attended. The group Moon Hooch plays live shows incorporating 2 saxophones and a drum kit. In addition they create completely unique sounds by making modifications to their instruments out of upcycled materials. They started as a band playing in the subways stations in New York and the materials they use for the modifications display their roots. Since I grew up playing saxophone in the train stations of New York as well, seeing them inspired me to create something similar.

My original idea was to make a wooden saxophone, but I soon came to the realization that manipulating wood to fit the shape and be airtight was not viable. After brainstorming other materials to use, I decided on metal piping for a few reasons. They are already hallow, there are curved connecting pieces that are made to be airtight and the metal would keep the bright sound of the saxophone. My goal was to practice getting the pitches correct with PVC pipe because of how cheap it is and easy to cut, then transfer that over to a metal pipe.

I did a significant amount of research on how to get the pitches correct, and tried that during my first attempt. I planned on using PVC pipe to experiment then, transfer that over to the metal piping. After my first attempt at the saxophone, I realized that trying to use the harmonic series was too complicated and not going to work out. I then tried to match the sizes of the PVC with my saxophone and use the buttons as a reference for drilling the holes.

I ran into a few problems with this. The most limiting, was how far my fingers could reach and still create an airtight seal. Yet after resealing the holes that I could not reach, I was able to get a range of pitches that was a good starting point. At this point I realized that I was not going to be able to transfer this to the metal piping because the material would make the pitch change a significant amount. I then got a 10 foot piece of PVC and was able to create run a trial and error system to work toward my final model.

After a while, I was able to get the pitches calibrated, but because of how far my fingers could reach I was only able to hit a certain range of notes. This project could have been completed into a real instrument if I had more time and a budget for this and definitely something I continue to plan working on in the future.