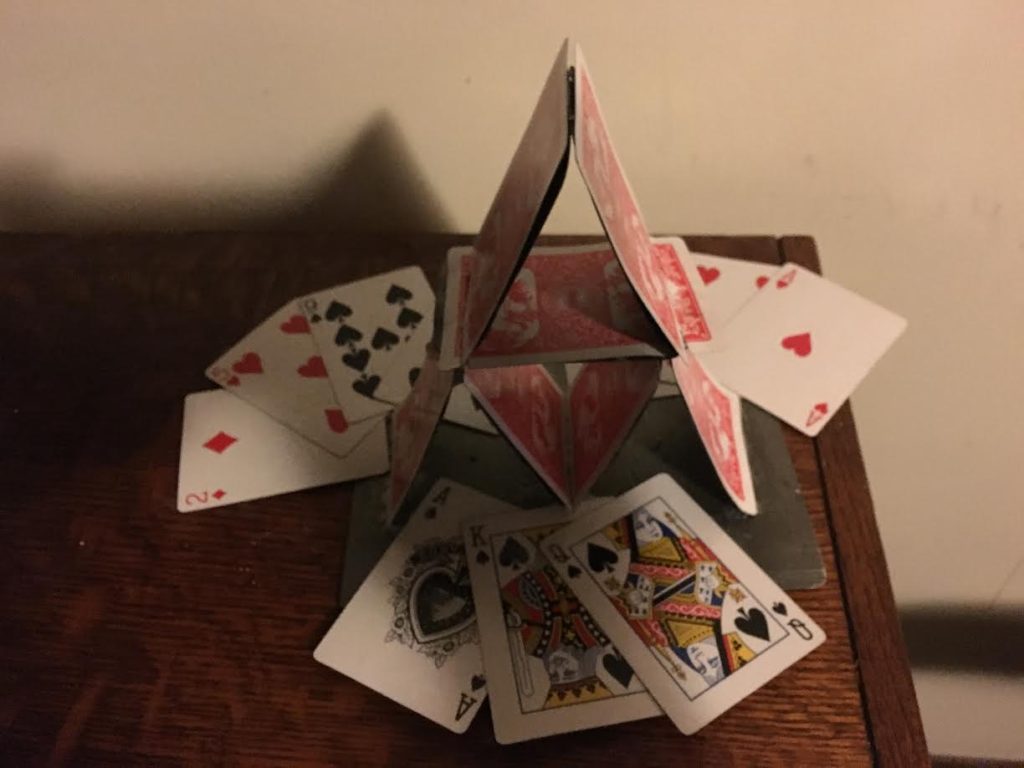 My vision for this project was to create a house of cards that appeared to be a normal house of cards, but was impossible to knock down. I wanted to find metal that was thin enough to remain unnoticed, while still being able to be welded. I wanted red cards to be used because that is the color most often found in casinos. I wanted some of my greatest moments of counting somehow represented in the piece. I was able to accomplish all of these goals with a few iterations of my design.

My ideal design process was clean and simple, but in real life it got a little messier. The metal I originally wanted to use was far too thick, it would have been much more obvious than I would have liked. Then, the 26 gauge steel that I used was just thick enough to weld, with much difficulty. No matter what thickness I used, it was going to cause issues. Then, the design had to be supported from the bottom, so I had to make a plate and weld it to that, which makes it very obvious that it is not just a house of cards, but I was able to effectively integrate some of my artistic goals with that plate.

There were many steps needed for me to create my artifact. First, I had to gather the materials, a deck of cards, sheet metal, and adhesive. Second, I had to practice welding on thin metal. I used a MIG set that a friend of mine has in his garage. Third, I used a set of metal shears to cut the metal into 2.5” x 3.5” rectangles, the size of a standard playing card. Fourth, I used a grinder to smooth all of the edges of the metal pieces and round the corners so that they would be hidden under the cards and the metal would be easier to weld. Fifth, I did some calculations to design a jig that would be used to ensure that all of the triangles that I welded with the cards would be at an identical 40-degree angle. This jig was cut from a spare piece of wood. Sixth, I used the jig to hold the metal cards in place and I welded 3 “v” shaped pieces. Seventh, I welded two of them together to make an “M” or a “W” depending on how you look at it. Eighth, I made a plate that was 5” x 7”, double the dimensions a standard card and welded the “M” to it. Ninth, I took the single plate and welded it across the top of the “M”. Tenth, I welded the final “V” to the top. Eleventh, I used the cards to make the house of cards appear to be normal and placed cards around the base to represent the best hands I had ever played.

The only functional goals I had were that it looked like a regular house of cards at first glance, and it remained upright without falling apart. I achieved both of these goals.

My artistic goals were to create something that represented one of my favorite hobbies, counting cards in blackjack while using a casino aesthetic. I achieved this while adding a lot of subtle details that hit home for me. The undersides of the cards were left as metal because card counting is very easy to spot, if you know what you are looking for. The cards that were glued to the fronts of the metal pieces were all face cards and aces, the combination of cards needed to get a blackjack, and the base was covered in some of the greatest hands of blackjack I had ever won, archived in my house of cards. I would say that my original goals were surpassed with this artifact.

My plans for continuing with this artifact is to add the best hand of blackjack I win with each trip to the base of the house for the rest of the semester. This will serve as a story of card counting for the semester that card counting paid for. In the last semester I earned enough money with the system to pay for all of my classes and tuition for this semester.