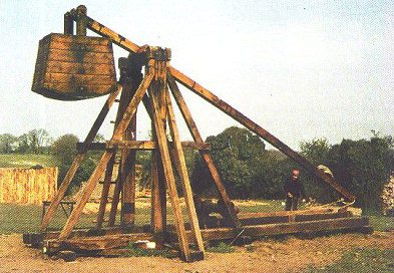 Anyone who has played Age of Empires will agree on one thing, that Trebuchets are awesome. For those who don’t know about this marvel of medieval engineering, a trebuchet is a type of siege engine that was used to hurl 100 kg (220 lbs) boulders at or into enemy fortifications located up to 300 meters (980 ft) away, making it vastly superior to other siege weapons like the catapult. I’ve been playing Age of Empires since I was a kid and although I am not very good at it, one thing I am good at is destroying my enemy castles with trebuchets. I became interested in this particular weapon because it had the longest range among all the siege weapons in the game. It could destroy a castle without even getting in the line of fire of archers mounted on top of the castle. Another good example of their usefulness can be seen in The Lord of the Rings: The Return of the King movie during the siege of Gondor scene. We can see a number of trebuchets mounted on the Minas Tirith Castle trying to defend the castle against Sauron’s forces. While other siege weapons like catapult and onagers have simple throwing mechanisms, the feature that sets a trebuchet apart is its sling action which helps in throwing the projectiles to much larger distances.

For my final project, I plan to make a scale model of this devastating machine which would throw tennis balls for about 30 ft. Below is a video of 100 trebuchets killing a single man in the AOE2 game.