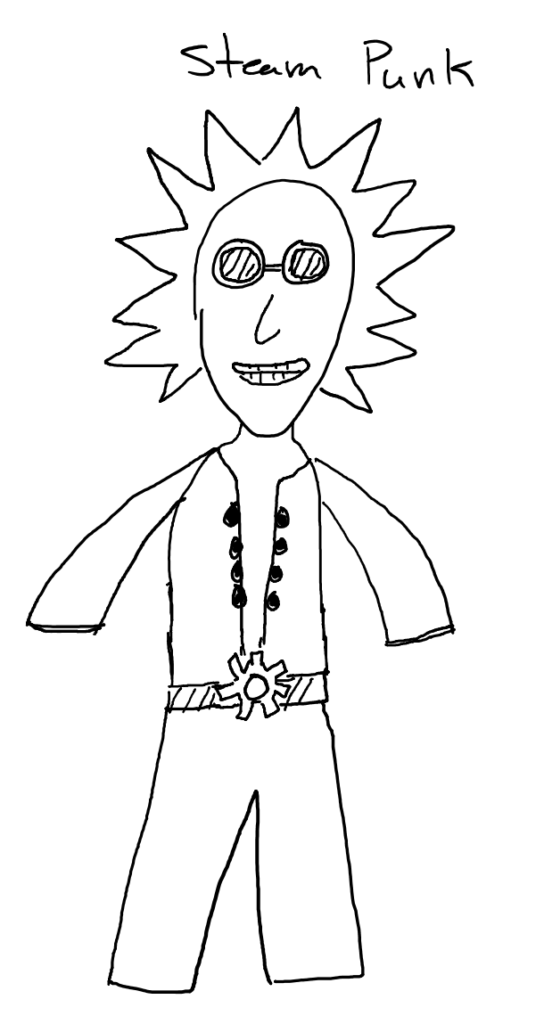 For my main project, I am planning to use the psychedelic theme, modified to fit within the Rick and Morty themes created in the show. Please see my Design Review post for more information.

For this post I am exploring three other aesthetic options to use in my final project: steam punk, supernormal stimuli, and a minimalist theme.

The first aesthetic alternative I considered is Steam Punk, which can be seen in the below sketch. This design features steam punk relics, such as large goggles, a gear-shaped belt buckle, and a steam punk-esque vest.

The second aesthetic alternative I considered is supernormal stimuli. This effect was created by using large features, such as the eyes, mouth, hair, and hands. Thiese elements fit with the supernormal stimuli theme as they draw attention to these features particularly, and can elicit emotional effects based on their large relative size to the other features in the sketch.

The third aesthetic alternative I considered is the minimalist theme. While this sketch appears to be a dressed-down version of other sketches, it is in fact intended to show as little elements as needed to convey the same aesthetic message. The hair stands out in this sketch, highlighting that particular feature among the others. The other features in the sketch exists to provide a consistent outline of the model, and highlight the hair feature.