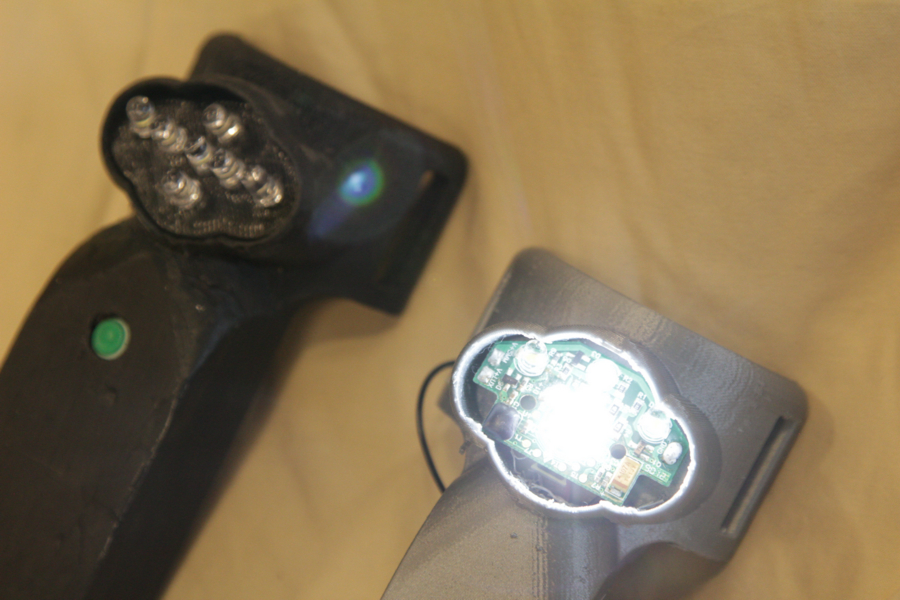 My dad is one of the brightest and most creative people I’ve ever met and ever since I was a little girl, we have always been thinking of new products to develop, whether it is for our outdoor recreation business or just for convenience. When thinking about a main project, I decided that I wanted to try and kill two birds with one stone and develop a product that we could use in the mountains that would also serve as a 50th birthday present to my dad.

One of the hardest thing about owning a family business where you take people into the mountains is the assurance that each client will be safe. One factor that adds to this safety is to have bear spray (pepper spray) on you at all times when in the wilderness. Throughout the years I have heard many stories about backpackers who forgot to hand their food and had a bear come into their camp, day or night. My father and I also had the pleasure of running within 20 yards of a Grizzly Bear while horn hunting once. Thankfully, the bear was more afraid of us then we were of it. Nonetheless, I remember being so flustered that it took longer than usually to get the bear spray out and ready, even in broad daylight. A picture of the area we encountered the Grizzly Bear can be seen in Figure 1 below.

But what happens when it is dark outside and you don’t have time to look for a flash light and bear spray? Well that is where our idea comes in. I want to design and develop a flashlight that is easily attachable to current bear spray cans and that can help save time, and lives, if one was every under attack by bears during the night. Not only that, but one could also improve aim of the bear spray if the user only had to worry about holding one device instead of two.

I started this project by first thinking of my top five constraints. Most importantly, I wanted to choose an aesthetic that would make this project stand out such that it didn’t look like I just attached a flashlight to a bear spray bottle. After looking through the history of many different aesthetics, I narrowed my choices down to three. These were Art Deco, Organic and International Style Aesthetics. My hand drawings of these can be seen in Figures 2, 3 and 4, respectively. Note: I’m not much of an artist but I tried my best! After making these drawings, I eventually decided that Art Deco was the route I wanted to pursue while having the light fixture itself resemble the Organic Aesthetic.

My other constraints for the project were that the device needed to be small enough to fit in a backpack side pocket and it needed to be durable so that it could withstand getting bumped around in a backpack while in the mountains. In addition, I wanted to have the batteries that could easily be found at convenience stores, such as AA or AAA batteries. Lastly, I wanted to have multiple light settings.

After the planning stages, I dove into my first prototype. Someone once told me to make prototypes to answer a certain question, so for me, I wanted to see the size of the device I was looking into. I went to JoAnns and got some foam balls and block and cut them into my general shape. I tried to add some sparkles to add more aesthetics but noticed that once they dried, you could barely even see they were there! Figure 5 below shows my initial Solidworks model and Figure 6 shows my first built prototype.

After making this first prototype, I decided I wanted to make the design a little bit smaller. I also needed to make sure that the device incorporated the curvature of the outter diameter of the bear spray light and had holes for wiring and controls. I ended up remaking my solidworks model completely, which can be seen in Figure 7 below. In addition, I added slots where velcro could attach to so that you could then attach to the bottle and I cut out holes in the back so that I could later go back and 3D print a back cover piece if I decided to leave this as my final model.

After this, I went to 3D printing. It only took about 8 hours but had a substantial amount of support material based on the design. In future designs, I will probably want to redesign again so that less support material is used. My final 3D printed project can be seen in Figure 8 below. Figure 9 also shows the attachment to the Bear Spray bottle. It fits snugly which is exactly what I had toleranced for so I am content.

I always told myself if I had time, I would start trying to figure out the lighting and controls. Circuitry is the subject I am worse at and it took me longer than most to figure out how to set this all up. The biggest help was taking apart a couple of head lamps to see the inside circuitry. A picture of a BlackDiamond head lamp I took apart is shown in Figure 10 below.

Now knowing how I want to set up the lighting and circuits, I have ordered the parts I think I will need and am planning on having this circuitry done by Expo. In addition, my fathers 50th birthday is the following Monday so I plan on immediately giving him this as a present after I am done with expo.

As far as some barriers, I noticed that once I started working on the circuitry design, I was going to need three AAA batteries instead of one AA. This being said, I will have to redesign the Solidworks model yet again and account for this sizing. I also need to add extra room for the breadboard.

Eventually, my dad and I also want to develop a beeping mechanism that will go off if the bear spray is unsealed because getting sprayed but that stuff, even as an accident, is one of the worst pains I’ve ever had! I also need to work on getting a glass or plastic covering outsourced. Nonetheless, I am glad I went through this process and I believe I have met my aesthetic and design constraints. I am excited to see my Dad’s reaction when he sees an idea that we had come to life!