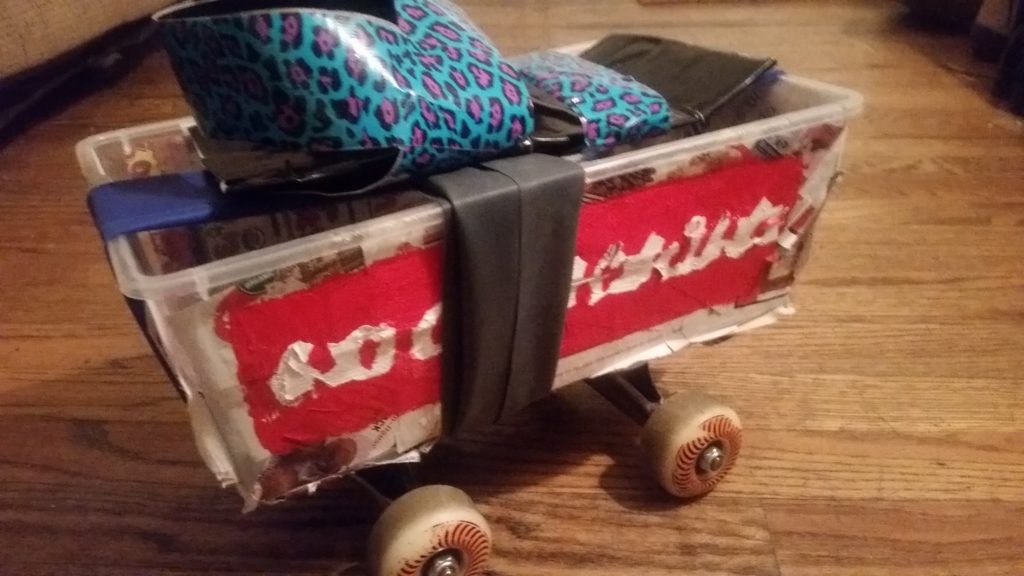 The MoonSkate is a combination of two products from my childhood: Moonshoes and skateboards. I decided on this project due to my love of skateboarding and a drive to innovate on this passion.

In the early stages of my project, I drew upon some aesthetic inspirations that did not translate that well onto my first prototype.

I was unsure at the time how exactly to integrate an aesthetic onto a physical object so I toyed around with the idea in my head for a while. After getting some feedback from my group members, I crafted a prototype without an aesthetic at first using just the materials that I needed to get a proof of concept.

After receiving feedback on this first iteration, I had to sit back and think about how exactly to move forward. Should I make the MoonSkate functional? If so, I would have to integrate some sort of braking mechanism. Considering normal skateboards do not even have a braking mechanism, that quickly left my mind in terms of feasibility. I then embraced the danger inherent of riding the MoonSkate and disregarded all safety measures that would normally come in such a vehicle.

That also includes acquiring an adequate container upon which the MoonSkate would be mounted. I kept the plastic bin from the first iteration although it is not an ideal frame for the product. Moving forward, I am considering building a wooden frame for the product or learning how to 3D print objects.

For my final product, I introduced a grungy aesthetic to the build. I tore up some newspapers and applied Mod Podge to the exterior of the plastic bin, then pasted the newspaper bits onto the bin with the Mod Podge. After that, I created a graffiti stencil in Adobe Illustrator so I could paint some graffiti on top of the newspaper material.

Unfortunately, I made a mistake in painting the graffiti. Paper from the stencil tore off onto the paint because I used a heavy acrylic paint that adhered to the stencil.

I was left with an elongated white glob of paint that was even more unpleasant to look at than planned. In order to address that, I painted the gaps in the letters by hand and it turned out okay.

Fabrication of the MoonSkate was rather simple. Apart from painting the exterior of the bin, I also constructed footholds made out of two different flavors of duct tape. One, black. The other, a teal/purple leopard print duct tape. The black duct tape was used to tape around some cardboard to create a makeshift sole while the leopard print tape was used to make the straps of the foothold. It turned out well!

I also used elastic therapy bands to keep the foothold elevated in the plastic container and to provide the bouncy feel I was hoping to achieve. Unfortunately, the elastic bands are not strong enough to support the entire weight of an average adult, so putting weight on the MoonSkate causes people to sink into the bin rather than bounce. I hope to remedy that by researching other elastics or by adding springs to the bottom of the bin instead.

I then drilled skate trucks to the bottom of the bin to allow people to roll while bouncing. That part was a success.

All-in-all, the project cost me about $80 because of the combined cost of the plastic bin, the elastic bands, the drill I purchased for the project, and the paint supplies needed. While this was more expensive than I expected, it was within budget. For that, I am thankful.

Please let me know if you have any feedback!