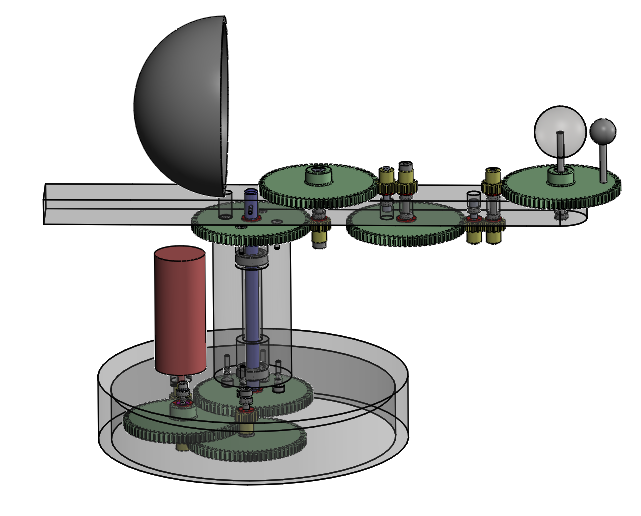 An orrery solar system is meant to depict the relative motion of the planets around the sun. for my final project I chose to condense this and only replicate the earth and moon. I took inspiration for my work where I help design and assemble space flight instruments. I also have always had a passion for space and getting hardware to survive the harsh conditions that are present. This is also where I got my aesthetic for my project. I want to go with a Da Vinci type of machine along with incorporating some sort of simplistic elements into the project. Also with this I want it to look complex, but elegant at the same time. This is how it turned out:

It took a bit of time to final get to this final product but it was worth it. I first started by creating a prototype just to get the size I wanted to strive for. This came out to be about 1ft in diameter and about 6 in tall. See below for initial CAD model.

From here I moved onto creating a less cartoony model and from which I could source components and begin building the final product. This is shown below.

As you can see here most of the support is transparent to show what is going on. I had to include lots of gears and bearings to get the motion I wanted. This all starts with the motor in red. This motor turns at 19RPM and then is reduced three more times by a factor of 6 to get it even slower. This then translates up the shaft in blue, which turns the arm of the assembly. The arm at this new speed, completes one full revolution in about 9 min. To get the moon rotating, I needed to include more gears on the arm. These increase the speed of the rotations two times. This is all possible by the fixed gear on the collar for the shaft.

From here I wanted to include lights that would light up the earth and moon and project stars onto the walls and ceiling. I accomplished this by poking holes in the sun and cutting a larger hole for the light to the earth and moon.

To make this assembly I first had to machine all my components that I could not source off the self. This took about 40 hrs of work in the machine shop. After that I had to assemble it. There was some back and forth making sure I didn’t screw anything up, but in the end most of the parts worked together. Here is an assembly step.

Overall assembly went fairly smoothly. I had to glue a little more parts together than I was anticipating but it was and is functional! Cost? Lets just say it was a little more than I was hoping it would be. Large gears were not cheap, just search McMaster.