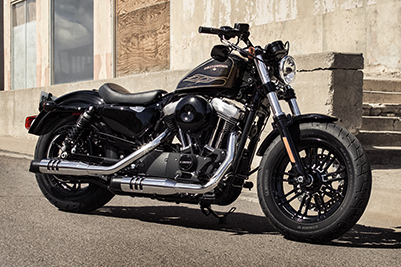 For my main project, I decided to make a heartbeat sensor for my dad.  He is a big fan of Harley Davidson and their motorcycles so I thought it would be fun and interesting to create a sensor with a Harley Davidson aesthetic.  For the design of the case which the sensor would go in, I based the concept around the peanut gas tank shown below with my final product as a comparison.  I used black paint with orange flames which follows the “biker gang” and “hog” aesthetics that come to mind when thinking of Harley Davidson.  The sensor lights up one of three lights based on a range of beats per minute that would tell the user to speed up (green), maintain that speed (yellow), and to slow down (red).  The color choices were inspired by the lights on a streetlight which I felt were fitting for the course of action that the suggested.  It also fit the motif of riding a motorcycle.

Initially, I had planned on designing it as a watch, something that could be worn on one’s wrist while they worked out.  Although after the design review, it did not seem like a good idea.  Due to the size of the arduino that would be used to control the heat beat transmitter, the watch would be rather uncomfortable to wear especially if the person is moving their arms which is common while working out.  Also, the original design was wider than this version, which allows space for its components in height.  Instead of an attachment to strap the case onto a person’s wrist, I designed and build a clip that would be easy to hang on someone’s shirt, but is also sturdy enough to withstand the loads from it bouncing up and down during a workout.

The entire case was 3d printed using the school’s Lulzbot printers and was done with PLA.  The top and bottom halves of the case were printed separately, along with some clips that would connect the two pieces and allow the user to access the interior of the case to swap the batteries and change the LED lights as needed.

I purchased a transmitter from Polar, a heartbeat sensor manufacturer, and used it with my arduino to create the sensor.  The range on the sensor is about 4 ft. so the user has to be close to the sensor for it to work.  My design of clipping the sensor to a person’s shirt benefits from this since the sensor that sends the signal to the arduino goes on the wearer’s chest.  The polar component that produces the signal doesn’t display the wearer’s heartbeat so my sensor is required.  The LEDs were shoddered together.

The overall costs to make my heartbeat sensor was about $160.