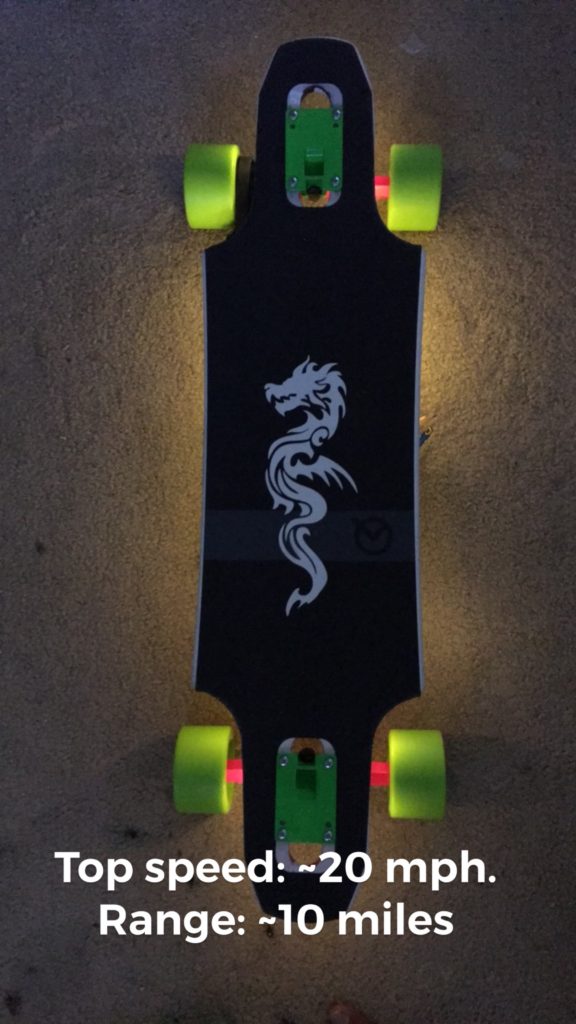 I am really excited to share the journey of building an electric longboard!

This is what the final product Balerion looks like:

This is my electric longboard, Balerion. It is designed to travel at a maximum speed of 25 mph with a range of 10 miles.

How did I build it?

I had an old longboard that I have The process to build it was a long and arduous journey. There were several steps that went into building it.

For cleaning, I had to remove the grip tape and all old paint from the longboard. I used isopropyl alcohol to get the paint out and a hair dryer to get the grip tape out. This is what the final result after cleaning looked like.

Then came the fun part, designing. For this part, I thought long and hard about the aesthetic that I wanted to portray. I have always been drawn to neat geometric patterns, reminiscent of some features of the modern movement. At first, I had to use primer to get a base coat. Then, I used white paint to give a clean white base for the board. Then, I used painters tape to create the design.

I was then ready to paint the base! I chose a rainbow sort of painting array to bring out the colors and add some good color to the base.

Then was the best part of removing the grip tape and viola! The final paint result was beautiful!

For the front part, I used grip tape and laser cut it to fit the longboard perfectly. However, that was a long process too. To get the details just right, I created a solid works model of the front of the deck shown below. Then, I imported it into coreldraw and placed the design that was the inspiration for the name of the board, a large dragon!

The final result came out better than I had anticipated and it looks really neat.

The next part was the mechanical design assembly. For this, I had to buy a few parts. The first purchase, after visiting several forums was the tacon Bigfoot 160 motor.

I also bought new trucks and wheels for the longboard and a way to mount the gear. The final assembly looked like this with the motor mounted before and after.

This is the wiring diagram.

I also had to learn how to solder and that was a great experience!

The last step was the overall assembly. In theory, this should have been an easy task to accomplish but it was very difficult because I had to disassemble and reassemble the longboard because of the angle at which the motor was mounted. I wanted to have enough of a clearance so it wouldn’t come too close to the ground. I also had to laser cut an enclosure to store the electronic assembly safely under the longboard. I also had to sand the enclosure so it would fit well under the board.

Finally it was time to test the whole thing! I connected the VESC to the computer and after messing around with some settings, I was able to control it with my remote controller. I could output live data, here is a screenshot!

I also added some LED lights below the longboard. This was the final result!

It runs really well and I love riding it around campus.

This is the overall cost of the setup and the vendors I bought it from.

I really enjoyed building the longboard and if you have any questions, feel free to reach out to me.