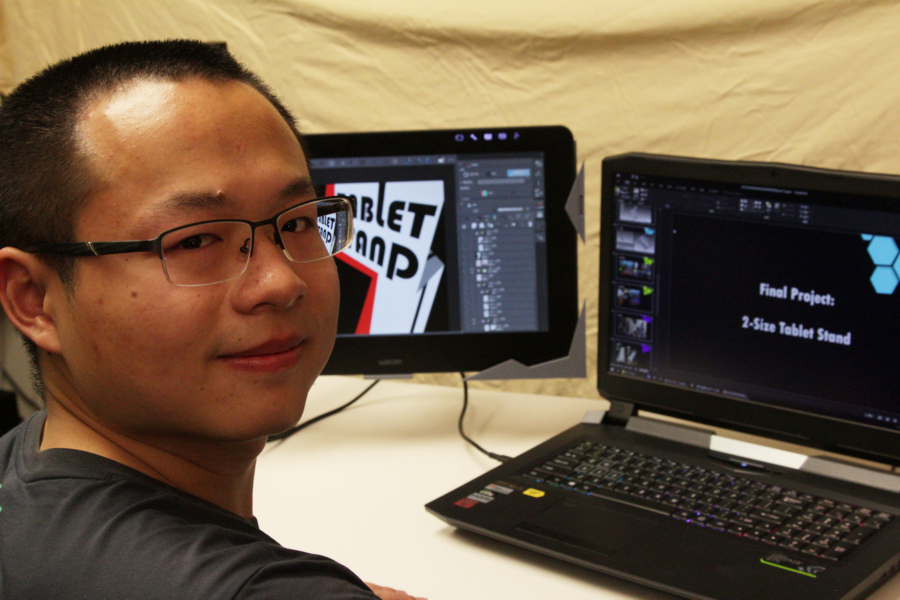 Polish some of the rough edges left by the printing, make some padding on the screws so it doesn’t scratch the tablet, do something about the part for power cables, make it so I can take the tablet out without unplug first.

Compared to some or my original sketches, both the aesthetic and mechanics has changed a lot, the “opening fan” and Bauhaus designs were abandoned since the first one would need too much extra stuff to make it stable, and bending metal pipes is too complicated for the Bauhaus ,which still needs a plastic piece too big to print. The final design came to me when I was sketching some random triangles, and after that it’s making sure it works with what I have.

Most common reaction was “This frees up desk room so much!” I didn’t make that part but using it is definitely a good idea.

The tablet was covering most of it, when I take the tablet off it attracted more (than 1) people.

Most common teammate reaction: “This looks much bigger than on the presentation!”

Most interesting question: “If you were to sell it, would you sell the 3D-print models or the real stuff?” I said the models since there are so many different VESA standard monitor mounts with out there.

I think I will keep the same aesthetic but use a different color of filament, an definitely remember the power cables…