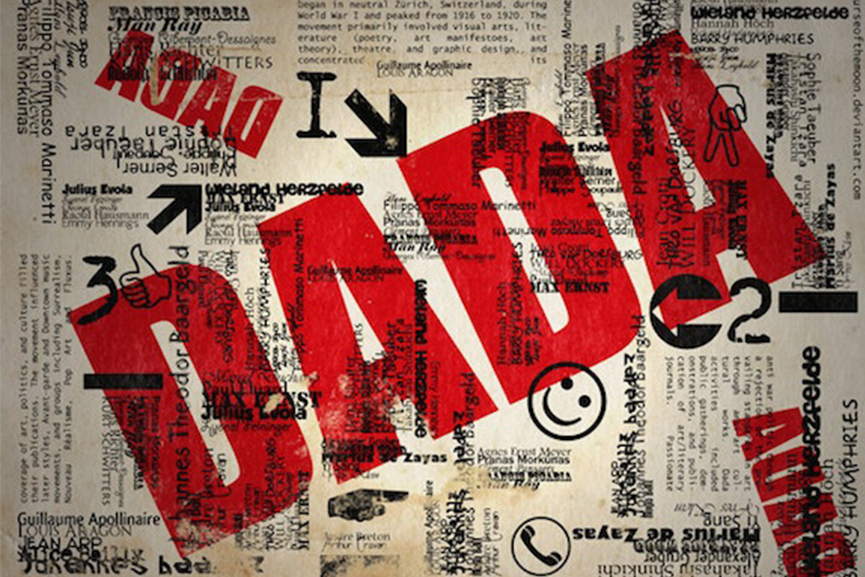 Following World War I, artists, reacting to the sheer volume of atrocities brought on by the war, felt it necessary to rebel against all existing standards of art and aesthetic, as a means of reconstruction. They were replacing the values of a society which created WWI in an attempt to pave the way towards a more progressive social order. A major component of this movement away from tradition was absurdism and parody.

Perhaps the most famous piece to come out of the Dada movement, Marcel Duchamps’ Fountain perfectly encapsulates the guiding principles of dadaism. The piece itself, a urinal with the words “R, Mutt 1917” scrawled along the top, by many, would not be considered art. But in claiming the object as art, Duchamp is calling into question what we define as art, and why. The inherent lack of meaning of the work illustrates the messages dadaist artists were trying to get across: that we must discard our notions of what is beautiful and what is art, breaking down the established norms, if we are to progress as a society.

Other works by Duchamp placed an emphasis on minimalism, moving away from frivolous materialism, as another means of disrupting the current trends in society.

There is no such thing as decoration. The whole concept needs to be buried. We take furniture in, that’s all. We buy the things we need for our comfort. Keep desires to a minimum and do away with what is not strictly practical. That’s it in a nutshell: fittings must be useful.

Disruption also came in the form of experimentation, altering meaning, in this case through stylizing and obscuring text.

Parody also factored into the aesthetic of Dada artists, as a direct means of questioning the value and sanctity of existing artistic hierarchies and structures. Although, this would often equate to self-parody, since the dadaists were artists themselves, or in the case of Raoul Hausmann , critics of art. This irony provided dadaists with a great deal of power; their critiques held more weight as self-critiques, rather than general condemnations of society.

Of course, the ultimate goal of the Dada movement proved unsuccessful, as we know, World War II followed not too long after this post-war push towards reform. But the sense of exploration, questioning, and creative energy brought about by this period of art remains a factor in the current artistic landscape.

Information sourced from the Tate Galleries