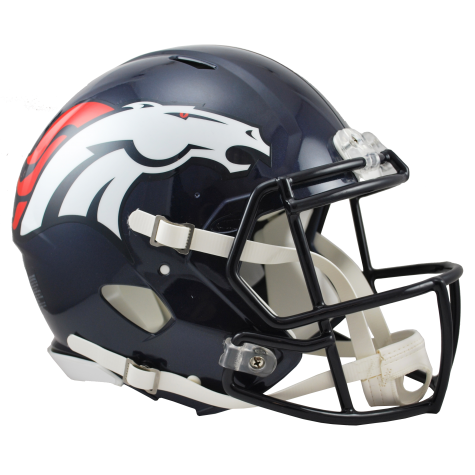 The National Football League (NFL) has been around for almost a hundred years and in a heavy contact sport such as American football, safety of the players is an obvious concern. Though the players wear a variety of safety pads and other garments, this post will focus on the helmets. Since the helmet’s conception, it has undergone many changes and seen many iterations all in an effort to improve player safety. Safety is the primary concern and for this reason, the aesthetics surrounding it have centered around functionality and safety first.

The first iteration of football helmets is unique as opposed to the iterations that came after. These early helmets were made entirely out of leather and were designed primarily to protect the player from gaining cuts or scrapes on the head, as wearing a helmet was not mandatory in the NFL until the mid 1940s. These helmets were also designed to resemble Trojan style headgear with the only oddity coming in the holes by the ear. These holes were added into the design to assist with communication on the field. Teams began customizing the leather helmets by painting simple stripes on the outside in the team’s colors. The leather designs proved to be very poor in protecting players from head trauma such as concussions and it was for this reason that plastic helmets were introduced to the market.

Though plastic helmets were introduced in the 40s and 50s, no common design was widely accepted or utilized until the birth of the AFL in the 1960 season. As seen above, the plastic backed helmets featured a piece of plastic with the team’s logo printed on the side of the helmet, as well as one or two face bars to protect the player’s chin and mouth region. In terms of safety, this addition of the face bar was a huge leap forward and as the helmet evolved, the bars protecting the player’s facial region became more of a highlight to protect.

Throughout the 1980s and 90s, helmets, as pictured above, began to incorporate some sort of “collision softening” hardware in the helmets. Though the plastic backing was still relatively unchanged on the outside, it was the inside of the helmet which changed the most. Again, the innovations in the designs were all made towards increasing player safety. More face bars were added in the horizontal and vertical directions, as well as covering more areas of the facial region and chin. From team to team, most of the helmets designs were the same however as opposed to being simple, gray face bars, some customization began to occur on each team as the bars were made in colors that matched one of the team’s primary colors.

Pictured above is one of the many types of helmets used in the league. As player safety began garnering more attention through media outlets and from lawsuits against the NFL about player safety, many companies have competed with others to be a player’s choice. In today’s NFL, players may choose the type of helmet and company they are made from, as well as some aspects of internal design may be selected as long as it gains approval from the NFL. The approval board looks for certain criteria to be met in modern helmets, such as straps to limit movement of the head, internal plastic in the plastic backed area of the head, and collision dampening technology. This is all to limit injuries a player can receive from an impact to the head.

Football helmets since their inception have been continuously evolving and being ratified to limit player injury in the sport and as they evolve, players and team’s will always use these, by using different coloring schemes and sleek logo plastering on them, as a means to personify the unity of the team and its fans.