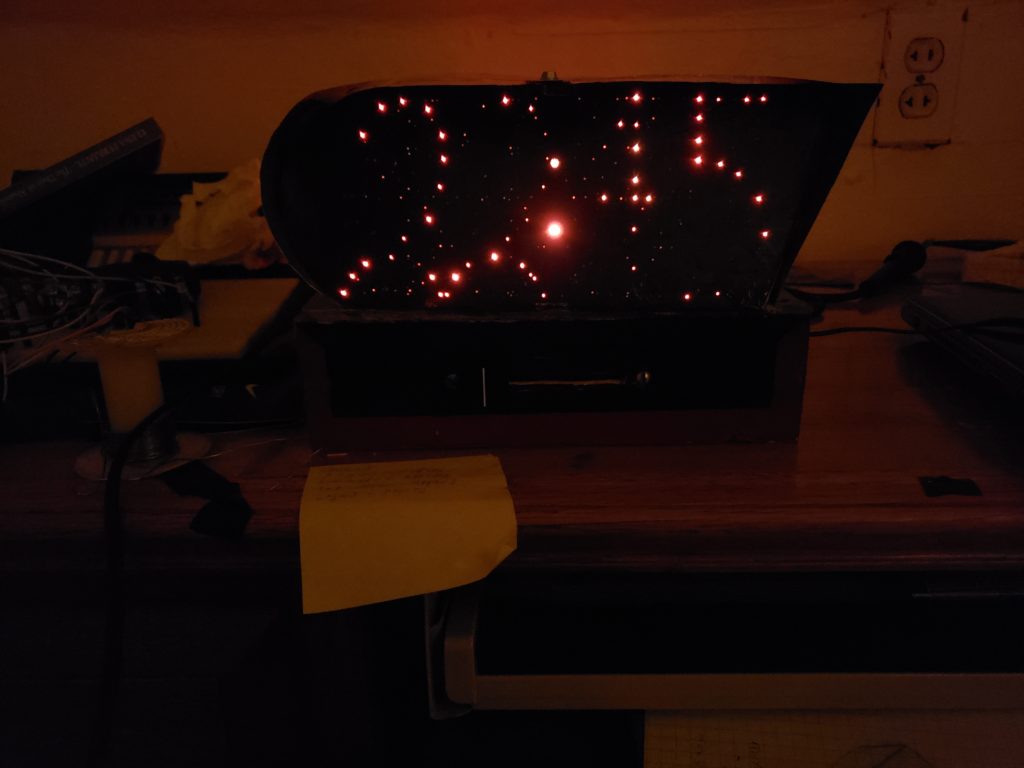 Fiber Optic Clock: What and How

For my main project, I designed and built a digital clock where the letters were created using fiber optic cabled inlaid into black epoxy resin. The purpose of this was to create the illusion of the numbers being like constellations in the night sky. Additionally, I chose to apply the aesthetic of Italian Futurism to the artifact. I chose this aesthetic because of how impactful it was on subsequent design movements in the 20th century and my unfamiliarity with the aesthetic provided a unique opportunity to learn about a new design movement. The final product can be seen in the featured image.

The design and building of the clock took place in three phases correlating to particular parts of the clock. I first designed the front face consisting of the inlaid fiber optics. Rather than making numbers in a method similar to a 7 segment clock, I chose to make each number from a unique bundle of fiber optic cables wired to their respective LEDs.  This allowed me to create numbers in fonts that I felt tied into the aesthetic of Italian Futurism. To accurately create the numbers I used a whole pattern laser cut into a plate of acrylic. Due to the importance of strong lines and geometric shapes in Italian futurism, I was able to design the numbers using the sketch features in Solidworks.  With the model of the front acrylic plate created I then laser cut the plate. Images of both the 3D model and the laser cut plate are included below.

With the hole pattern cut, I then began the tedious task of wiring the fiber optics into each hole then bundling them by number. This was extremely tedious and by far was the longest process in the build. I first had to cut bout 560 6in cables from the 100m cable of fiber optic I bought off amazon. I then wired the cable and began bundling them. The cables were bundled together using a piece of shrink tube and electrical tape on the ends. I continually had to reference the CAD model to ensure I was bundling the correct cables together and additionally had to ensure the cables did not interfere with the other bundles. In the end, it was impossible to avoid tangling due to the large number of cables involved.  I initially wanted to have each digit of the clock have their bundles in the same order (i.e. 0 at the bottom and 9 at the top) but due to tangling this was impossible so I needed to identify bundles through testing. An image of the bundled wires can be seen below.

With the bundling done I then poured the epoxy over the front face of the clock and let it dry. The next step was to attach the cable to LEDs. Initially, I thought it would be easier to have the LEDs held in place by a laser cut piece of acrylic. I created the piece with the LEDs oriented diagonally the hot glued the LEDs in place and soldered the leads together. I also created a scaled-down version of the acrylic piece by hand using some scrap plastic and oversizing the holes for the LEDs. The ends of the bundles were then pushed into the oversized holes in an attempt to guide the bundles to the LEDs. I quickly realized this design did not account for the odd directions the ends of the fiber optic bundles were oriented in due to the forces from the tangle of LED bundles. To fix this I took the LEDs out of the laser cut pieces of acrylic and bent the electrical leads in an attempt to match the angle of the LED bundles. The LEDs were then attached to the fiber optics using shrink tube. For the most part, this worked, but it is evident some fiber optic cables don’t make good contact with the LEDs as they are dimmer when lit. Images of the epoxy coated the front plate, initial LED guide and the LEDs attached to the bundles can be seen below.

The next phase of the production and design was the electronics.  A lot of the coding and electrical design of this project was out of my wheelhouse, so I was prototyping the electrical system in tandem with the production of the clock face. Initially while researching the electronics components I played with the idea of using neo-pixels rather than LEDs. This approach would have made the electronics design and coding much simpler, but ultimately I decided against this since I could not find a good way to attach the fiber optic cables to the neo-pixels. Since I was using LEDs this required I use multiplexers to control what led is lit since an Arduino does not have enough I/O pins to directly control all 41 LEDs. Since I have never used a multiplexer before this was the first prototype I made. In this prototype, I cycled through ten LEDs using serial commands to a single multiplexer. A multiplexer acts a multipath switch where the path is selected using serial commands. So for this circuit, the input signal to the multiplexer was 5v and each output Chanel was connected to the common anode of one of the LEDs. A very rough circuit diagram I used for this prototype is included below.

With this working, I repeated the code and wiring 4 times and added in code to create the clock. For this, I used a real-time-clock (RTC) IC and a library I downloaded of line. The code first reads the time from the RTC then depending on what number is in each digit of the time lights up the respective LED on the clock. I also added a slide potentiometer that controls the color of the LEDs. The completed wiring can be seen below.

The last phase of the production process was to create the exterior of the clock. Initially, my design for this was rather large and grandiose. The design involved the electronics housing to be slanted on three faces and to converge to a point in the back of the clock. Eventually, I realized this design would be extremely hard to manufacture and only add time to an already timely production process. This lead me to redesign the electronics housing to something that still captured the desired aesthetic but was much easier to manufacture.  Both designs are included below.

The one common aspect of these design was the metal cladding on the outside of the clock. I felt this was pivotal to the aesthetic due to Italian futurist’s fascination with industrial material. To create this feature I first used screws in the back plate and epoxy o the front place to attach the clock to the top of a simple wooden box I built. The next step was to solder wire to the leads of each LED then wiring them through holes in the top of the box.  Then using epoxy I attached the old LED guide plate to the top of the box as well. The intent of this was to act as a guide for the metal sheet and additionally add infrastructure for a top support for the metal. I then bent the metal to the correct shape and attached it to the clock using three sheet metal screws, one on each side and one on top.  Pictures of this process can be seen below.

The rest of the electronics housing was relatively simple to produce. I first cut holes for the ports to the Arduino, then cut a slot for the slide potentiometer. Lastly, I painted on a design that I felt fit the aesthetic of Italian Futurism. Images of these are included below.

In terms of budget, I am under budget. I never created a detailed budget for this project but set the goal of not going over $100. Currently, I am at about $60 spent on the project. I was able to cut costs by using material I already had in my possession and using an Arduino cone that works just as well but was about half the price. An image of the final project is included below along with a video of my final presentation.