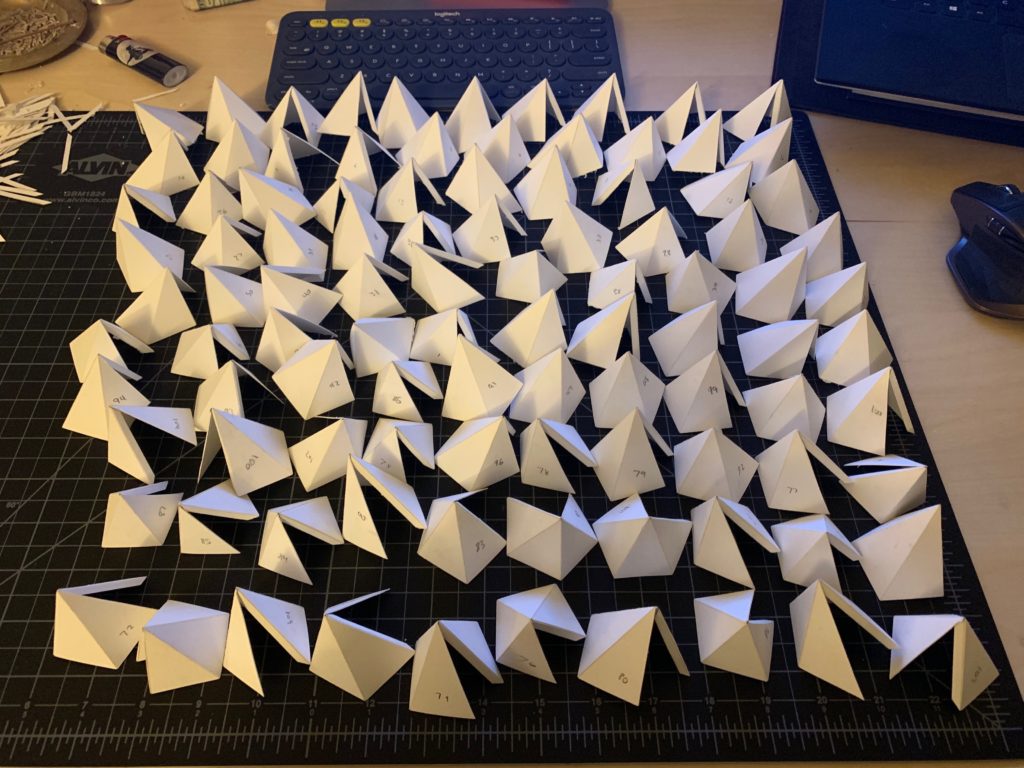 For my final project I set out to make a kinetic art piece for my room. I was inspired by the work of Matt Shlian who creates makes geometric sculptures out of paper.

I began my project with sketches of what the underlying mechanism would look like.

After I had these sketches completed I began to model my first prototype in Rhino. The purpose of this prototype was to test out the mechanism that would create the motion in my final piece.

After I finished modeling, I put together the prototype. I learned a lot during this process such as material tolerance and helped me better estimate how much time I would need to put into the final model.

It took me about four revisions to get the final model ready for fabrication. I was also testing out some other small parts on the side that affected the some of the overall design of the model. I was planning on fabricating it out of 1/4 in MDF and 6 ply paper for the pyramids. After I gathered all of my materials I set off to laser cut all of the parts. There were about ~450 different parts in the model that needed to be laser cut. It took e about four hours to laser cut all of the parts.

I ran into a lot of issues in the assembly and testing part. Since MDF is a combination of glue and wood fibers, the areas that were cut by the laser creates a sticky exterior. This was causing a lot of problems with the gears and the cam since there was a lot of friction. I re-cut some of the pieces to account for that but it was still not working.

I realized at this point that I would take too much time to do trial and error process for all of the pieces that were giving me trouble. I decided to go back and revisit the original aesthetic that I was exploring and simplify my idea. I removed the kinetic part of it but with the help of a Grasshopper script in Rhino I manipulated the surface into some shapes I liked.

After that I separated all of the individual pieces and unrolled them onto a 2D surface so that they could be laser cut and folded to their shapes.

The only step left after that was to laser cut all of the pieces and assemble which took around another 4 hours in total. In the assembly process the pieces got very dirty from my fingers so I had to apply some layers of white spray paint to cover up the blemishes.