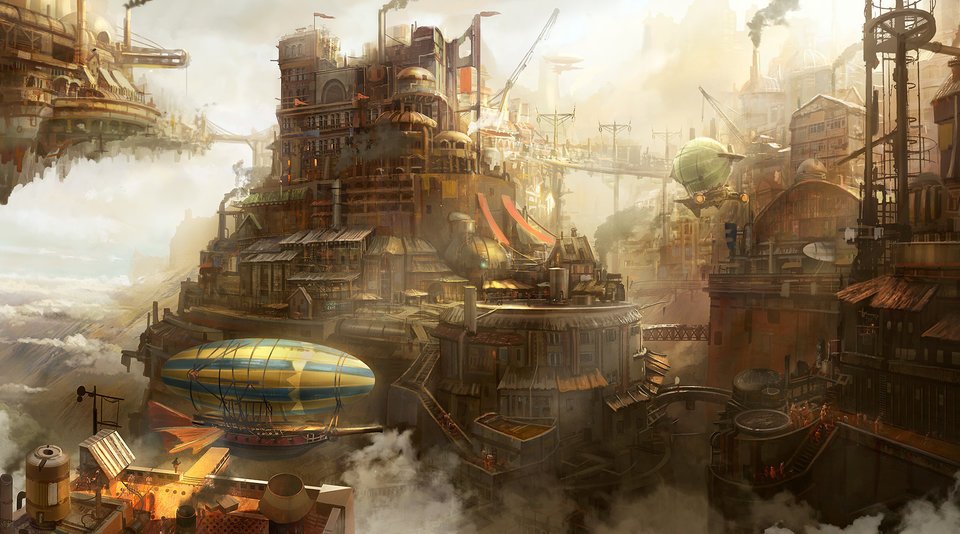 Steampunk is an aesthetic that stems from a sub-genre of science fiction that is based on the concept of what 19th century technology would look like if we had chosen steam power over electricity. The Victorian visual style features exposed gears and dials, and utilizes wood, glass, and metal (especially brass and bronze). Steampunk, as expected, is also illustrated with excessive smoke and steam.

[1] A CGI depiction of a steampunk city by Vladimir Petkovic

The term ‘Steampunk’ was coined in a novel Morlock Night, written by K.W. Jeter. However, the concept was popularized by authors like H.G. Wells and Jules Verne who are considered the forefathers of what is commonly thought of as the steampunk aesthetic.
The ‘punk’ in steampunk illustrates the gritty edge and semi-dystopian future that is depicted with the steampunk aesthetic.

Steampunk in essence is a combination of three sub-aesthetics. The first is Technofantasy which is technology that lacks plausibility. The steampunk technology typically is unrealistic from an engineering standpoint, which is not surprising from a society based on steam power. The second aesthetic can be considered neo-Victorian which is an aesthetic that incorporates Victorian style with modern technology. But to be clear, the term ‘modern’ in this context refers to the pre-atomic era, not our current day. And the final aesthetic is retrofuturism which contemplates how we think people in the past viewed the future. This one is especially prominent when considering how the 19th century might view steam as the drive for technological advancement.

[3] This is an example of how we think a steam-based society would view the future of technology. Likely, this society would prioritize slow-moving airships with slow propellers; rather than airplanes with fast motors.

[2][4] Both of these headpieces server to depict the overcomplication of useless parts.

[5] The fashion that is associated with the neo-Victorian aesthetic, but combined with the steampunk technology.