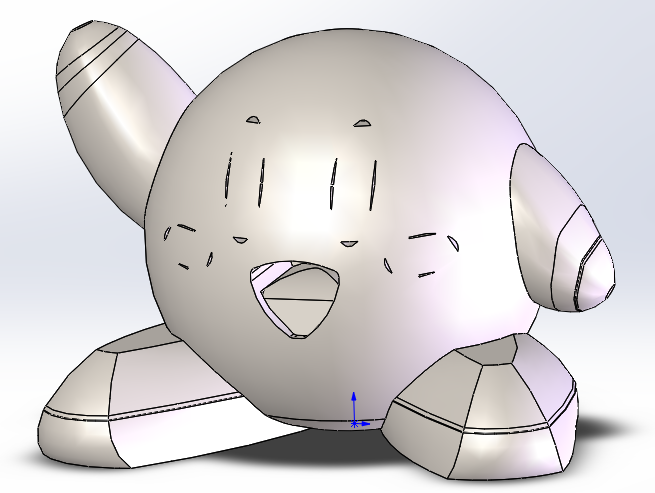 “Kawaii” or “cute” is an aesthetic that has become widespread throughout Japan, and it started gaining traction as early as the 1950s. Rune Naito is credited with being one of the earliest pioneers of this aesthetic, with the creation of his “Rune Girl” characters, defined by their large heads and baby-faced features. Big eyes and soft colors are other defining characteristics of this aesthetic I will be focusing on for my upcycle project, although “Kawaii” is an umbrella term which actually covers more. Below is an image of the Rune Panda, a figure created in 1971 which embodies this aesthetic and was the impetus for the explosive growth of “Kawaii” throughout Japan.

Other examples (and key players) which capture the aesthetic of “Kawaii” perfectly would be Hello Kitty, and Pokémon. These are actually the #2 and #1 grossing franchises of all time, respectively, grossing over $80 billion and $90 billion in revenue over their lifetimes.

I thought it was interesting to consider how lucrative this aesthetic is, despite how child-like and simple the designs are of nearly all things that fall within this classification. Finally, the subject of my upcycle project is Kirby, another iconic Japanese figure:

My vision for this project is to recreate Kirby striking the above pose, using recycled cardboard from my workplace, and the laser cutters on campus. I was excited to put these to use as soon as I learned of them, as I am a new student here. By using SolidWorks to generate Kirby via CAD, I aim to replicate Kirby as a 3D cardboard sculpture by cutting cardboard cross-sections, then stacking them together. Functionally, my goal for this project is to construct a sculpture which can stand by itself, and resembles Kirby closely enough to be instantly recognized by those who are familiar with the character. Below is an example from Epilog of what I am aiming to create, but of Kirby rather than a T-rex.

Artistically, I believe a key underlying aspect to the “Kawaii” aesthetic is to elicit an “aww” from the viewer, or at least the feelings that come with that. My goal artistically then, will be to have my sculpture do just that – if I hear anyone audibly say “aww” or at least admit to thinking it, I’ll consider this a success. Kirby is the perfect example of “Kawaii,” as he has huge eyes, is essentially a giant head, and is a soft pink color, so creating him will be a thorough fit of my chosen aesthetic.

Below is a diagram of my design process:

This cycle was at first very linear, proceeding through the different steps in a clockwise fashion. However, after the first dry assembly of Kirby, I found myself bouncing from step to step as I made changes, which led to subsequent inspirations and changes throughout the entire construction.

The starting piece of recreating Kirby as a 3D sculpture lies in generating a CAD model of him via SolidWorks. I began this surprisingly arduous task with sketches of profiles that matched each of Kirby’s defining features, then used the Loft feature to flesh them out.

From there, I added facial details such as his mouth via additional sketches and extruded cuts, resulting in the final form as shown here:

With this time-consuming step complete, I was able to then implement SolidWork’s Slicing tool to automatically generate the sketches necessary for the files necessary for using the Laser Cutter.

I then used this to create the .dxf files I sent to the laser cutters, which looked like this while running:

After all these cuts were complete, I touched up the rough edges with a box cutter, then did a dry assembly of the cross sections to check my work:

I promptly realized the proportions were a bit skewed, likely due to using cardboard that was slightly thicker than an 1/8th inch, which was the offset used in the Slicing tool of SolidWorks. To compensate, I simply took away a few layers from either side of the midway point, to better balance out his proportions. I simultaneously realized I would want to swap out the first 5-8 layers composing Kirby’s face out for cardboard with a white face, so that I could more easily add color using colored pencils. After fixing the proportions and substituting the bland, brown layers for colored, white ones I determined I was ready for final assembly.

The dowels shown are ½” x ½” scrap plywood I took from ITLL’s manufacturing center, and add stability to the sculpture while assembling. In addition to the dowels, I added rubber cement between each layer to create sturdy bonds, resulting in a solid final sculpture. Here are some additional views of the final product:

Reviewing my functional goals, I am very satisfied with the final product. This sculpture does indeed stand, and very much resembles Kirby, albeit in a bit of a low-resolution manner. However, assessing this artistically, I am admittedly dissatisfied. Although it did earn a couple of “aww’s” from the audience, I believe I could do a MUCH better job with future iterations, but it would need to stray from the upcycle nature of this project. If you look again at the bottom view of this sculpture, you can see how much more seamlessly the profiles are recreated when viewing the surface perpendicular to the laser cutter’s “edge.” So, if I were to rotate the slicing planes 90 degrees, and swap out the material for a thinner, solid material, I could recreate Kirby at a much higher resolution. Additionally, the solid surface versus the corrugated cardboard would allow me to apply paint, which would again be a massive improvement over my current coloring technique. I do plan on executing these improvements, since most the production time is already sunk into the generation of the CAD model. The drawing changes would take mere seconds to execute, although the new assembly would likely take significantly longer. My prototype here will likely gather dust until hitting the recycling bin once my improved models come off the cutters.

Thanks for reading, I look forward to any critiques you may have for me, and/or additional iteration ideas!