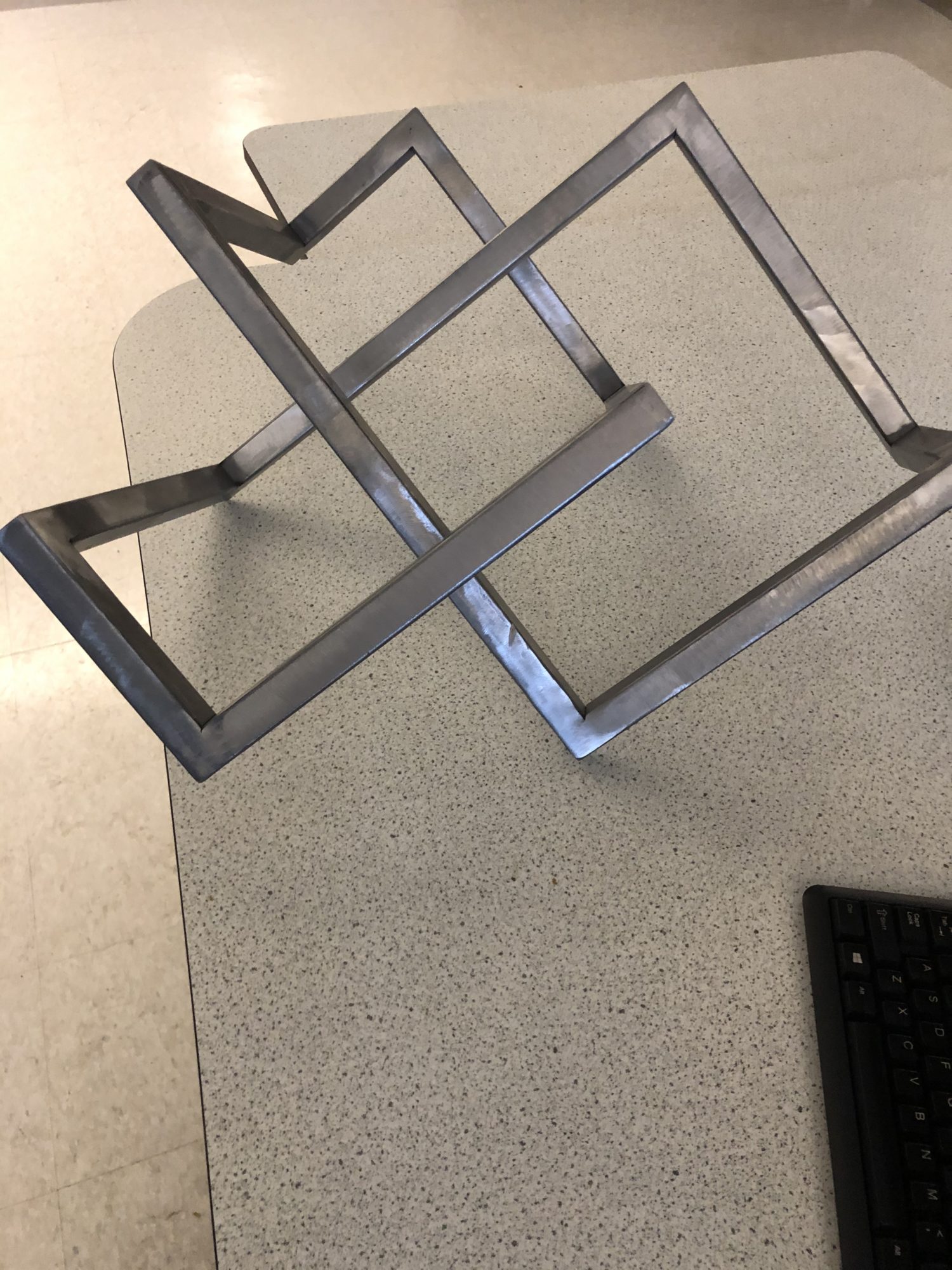 This project began with the idea of making a side table which fit a modern/industrial aesthetic. To do this, I originally planned to create a unique weldment using recycled steel tubing for the table’s structure and then build a tabletop out of wood cutoffs. Since the materials I planned to use were dimensional building materials, it was relatively easy to make a near exact model of what I envisioned. Using Solidworks, I generated a 3D CAD model.

Originally, I wanted to combine both natural and industrial components in a way that fit the modern aesthetic. An example of the aesthetic I am designing for is shown below. In the space, there is a lot of steel, brick and concrete which shows off the industrial aspects of the area. There is also a lot of natural elements included such as wood and plants throughout. My plan to replicate this aesthetic was to make a steel frame with the “Mobius Cube” geometry and complete it with a varnished wood table top as shown above.

Often times, design processes go as shown in the diagram below. They frequently go back to previous steps in the cycle multiple times as iteration happens.

For this project, however, the design was simple enough that I did not need to regress to earlier steps in the process. Instead, the design process was very linear for this project. Despite this, the final product turned out a little different from the original design.

Since I’ve had this old component design frame sitting in my backyard for years collecting rust and dirt, I figured this project would be a perfect opportunity to turn it into something new. Shown below is what remains of the project after it was disassembled and stored under a tarp since Fall 2018. The first step was to break it down. I removed all of the pieces that were not welded to the frame such as the seat, steering column, and brake cables. Then, using a cutoff wheel on an angle grinder, I cut out any usable straight pieces of steel tubing ensuring that I removed any parts that had weld beads since I would not be able to take already welded steel to the machine shop. Next, I sanded off all of the black paint (also with the angle grinder), leaving me with a bunch of straight, bare lengths of mild steel to work with.

Using the assembly drawing, I tack welded the tubes one at a time. As more tubes were added on, I had to get more and more creative with jigging. While tacking each individual tube, I made sure that the joint was square. Any error in doing so would mean that the last tube in the assembly would not fit since it is a continuous shape.

The image below shows what the frame looked like after all of the tubes were tacked in place.

Since all of the tubes fit and the frame looked good to me, I fully welded all of the joints. After this was finished and the weldment was cool enough to touch, I took the structure home to finish it. I sanded all of the welds down with an angle grinder. Once the weld material was removed from the surface, I switched to a finer grit wheel and sanded all of the surface, leaving a continuous, shiny surface on the whole structure. Lastly, I spray painted it with a satin clear coat to maintain the look and texture of the steel while protecting it from oxidation and dirt/dust.

Overall, I am very happy with how the steel structure turned out. In my opinion, the shape and material choice definity fall under the category of ‘modern’. To reiterate the vision that I had for this project: I was originally going to put a wood tabletop on the steel. However, after experimenting with a few options, I’m not sure which one is the one I want to go with. Even though I didn’t actually put a wood component into the project by the time it was due for the course, I fully intend on putting in time and effort in making a nice looking wood top on it. I think in the near future, this will turn into a cool piece of furniture for my living room and something I will definitely keep with me for a long time.