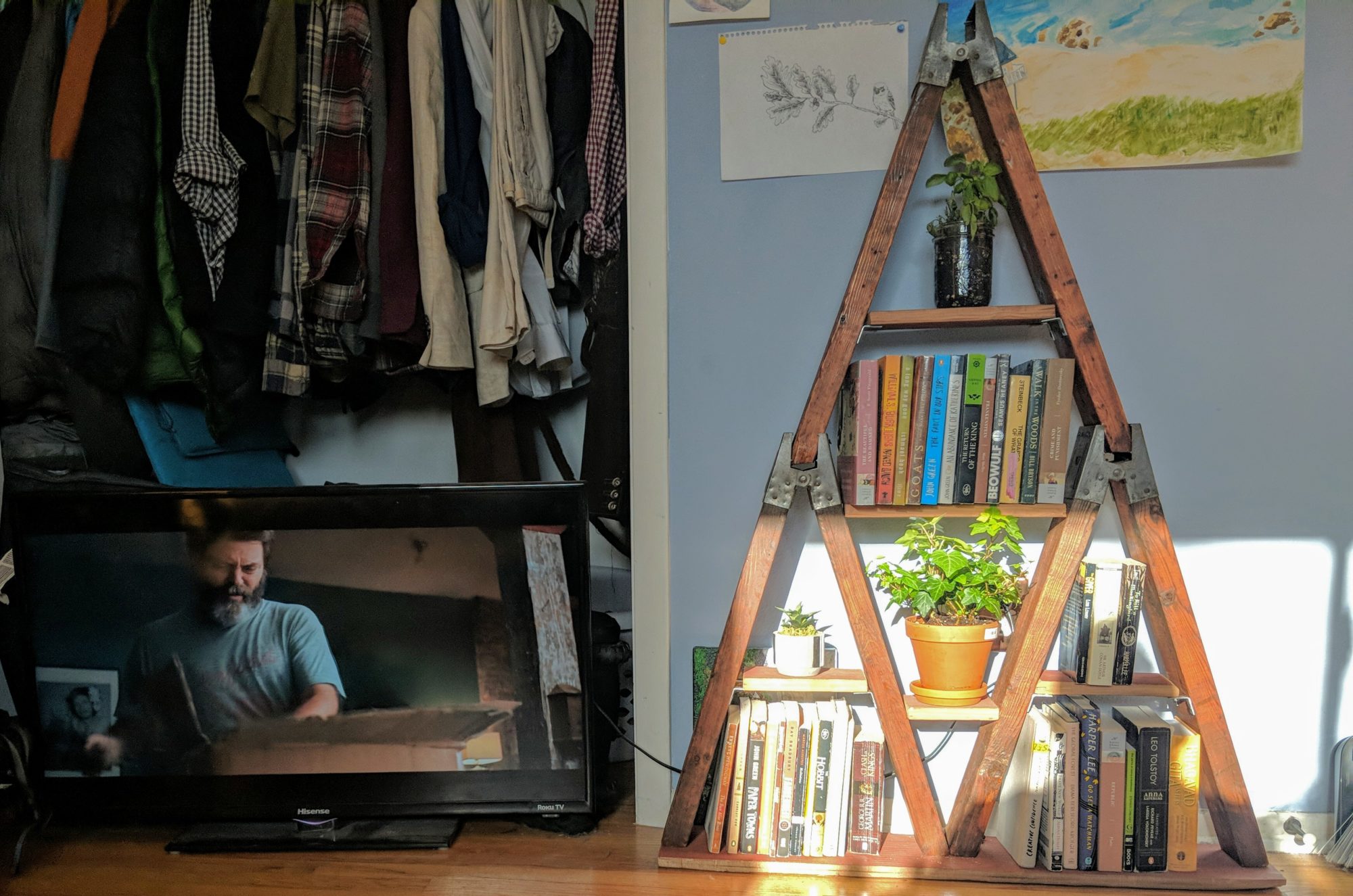 The purpose of this project is to look at upcycling. Upcycling is the process of making something useful out of discarded materials. Examples of upcycling can be seen all around us if we just stop and look. These can be things such as art instillation made of old tires, tables at breweries made of pipes, and re-purposing teacups for cactus planters. For my upcycle project I made a bookcase out of old sawhorses and siding.

This project was one born out of necessity. A few months ago my old bookcase broke and since then I just had my books stacked against the wall. This gave me an excuse to pick a clear direction with this project. At first before this project I was planning on simply stacking some cinder blocks and putting 2×4 boards across them. While this would have been effective it wouldn’t have been as visually pleasing as it could have been.

To make the bookcase more visually pleasing I decided to take a note from the aesthetics of urban chic and the aesthetic of old farm equipment being displayed as visual pieces. Urban chic can be most easily seen in the trends of using pipes and building wood to make tables. This is easy and effective as the steel pipes are significantly stronger than needed to support the sandwiches and beers that it is intended to hold. Furthermore, it gives a hardy feel to the pieces as they begin to resemble industrial machinery.

The “farm equipment being displayed as visual pieces” aesthetic that I had no idea what else to call refers to people proudly displaying old yokes, saddles, saws, shovels, and other antiquated farming pieces. Growing up in the Midwest I would always go to old junk stores and see these cool pieces and eat at restaurants where they were displayed and I really enjoyed that so I wanted to incorporate that into my piece.

Brainstorming more I came up with the idea of finding an old ladder, restoring it, and using boards to hold the books and as a double deal I could use the overhanging portions of the board to display plants. I went to Resource to look for an old ladder, but was unable to find one. In its place, however, I did find old wooden sawhorses. They were smaller and would require stacking, but they kept the triangular shape and rustic feel so I decided to make it work with them.

The materials used (aside from the sawhorses, angle brackets, and stain) I had laying around and include:

My vision for this project was first and foremost to create a bookshelf. I did not need it to be huge and honestly, I am glad I did not end up going with the ladder because it would have been massive. I knew I wanted to retain the triangular shape because I thought it was visually pleasing. The sawhorses were made out of 2x4s and designed to grip on to 2x4s so I decided it would make sense to stack them in a triangle with the bottom two gripping on to the the legs of the top one. From here I would orient the shelves in such a way that they could hold books effectively, and in the spaces where books couldn’t be held I would put my plants. Another thing is I wanted to make this using as few power tools as possible so I could have a personal connection to the object.

The design of this project was very easy as there was really only one way for this to come together and most of it was just figured out as I was doing it. My design was basically the statement of “three sawhorses, one stacked on top of the other two, shelves made of old siding”. Visually however I really wanted things to have red tones to them. The siding I had was from what I believe to be an old barn as they were the appropriate red and interlocked. Therefore when I was purchasing stain I picked one with a more reddish tone to it. This ended up working well as once the metal on the brackets on the sawhorses were restores they had a bluish tone which complimented nicely.

Future projects, especially when it comes to woodworking, would generally require more planning, but because of the nature of this project things just fell together in a natural way.

The first step with all of this was to restore the sawhorses. The first step of which was to clean them up with a wire brush. I chose a wire brush as it was good for removing rust from the brackets and much of the dirt from the wood. After this I cleaned up the wood by going over it with a coarse sandpaper and then a fine one. Finally I stained the wood and let it sit outside for a few days. Thankfully, I had gotten a head start on this and beat the snow.

After this, I assembled the triangle from the three sawhorses. The sawhorses were very narrow being 2x4s and would require a wider base. I opted to use some of the siding to do this. I measured out a piece slightly longer than twice the length of a sawhorse and cut it to size. I then used a chisel and sandpaper to flatten and clean the edges. I then measured out where it would make sense to add the holes to secure the sawhorses and drilled them. After playing with the orientation I reached the conclusion that to get the bottom sawhorses to bite the top one correctly I would have to beat part of the mouth of it down with a hammer. Once I did this the sawhorses fit well and I secured the two bottom ones to the support plank and then fed the top sawhorse’s legs into the mouths of the two bottom ones and secured it with screws

Next, I located where I wanted to put the shelves. For the shelves in the middle V they could sit unsecured without an issue, but for the upside down V portions of the bookcase it would require angle brackets to hold the shelves. measured the height using a tall book, marked it, and kept that as the standard height across the piece. Once all of the marks were made I screwed in the angle brackets and hammered them so they would be level.

After this I made the shelves themselves by measuring the distance between the brackets and cutting the siding to length. After this, I shaped them by using the chisel to make them the appropriate width and cleaning up the edges with sandpaper.

After this I simply moved it to my room, put on the shelves, filled it with books and plants, and it has been living there ever since.

The piece lived up to all of my expectations and is a functionally wonderful piece I will have for years to come. If I decide it has lived its life as a bookcase I may one day put it in my garden or greenhouse. The experience itself was wonderful as it allowed my to stretch my creative muscle and spend a couple days outside working with my hands and listening to an audiobook.

Aesthetically I really enjoy this piece as well. It looks like it would be at home in a coffee shop or in someones garden. I really like the how the red stain complements the bluish steel of the brackets and the natural red of the siding comes through well too. I also really like the odd shaped slots as it requires mismatching books of different heights to fit well.