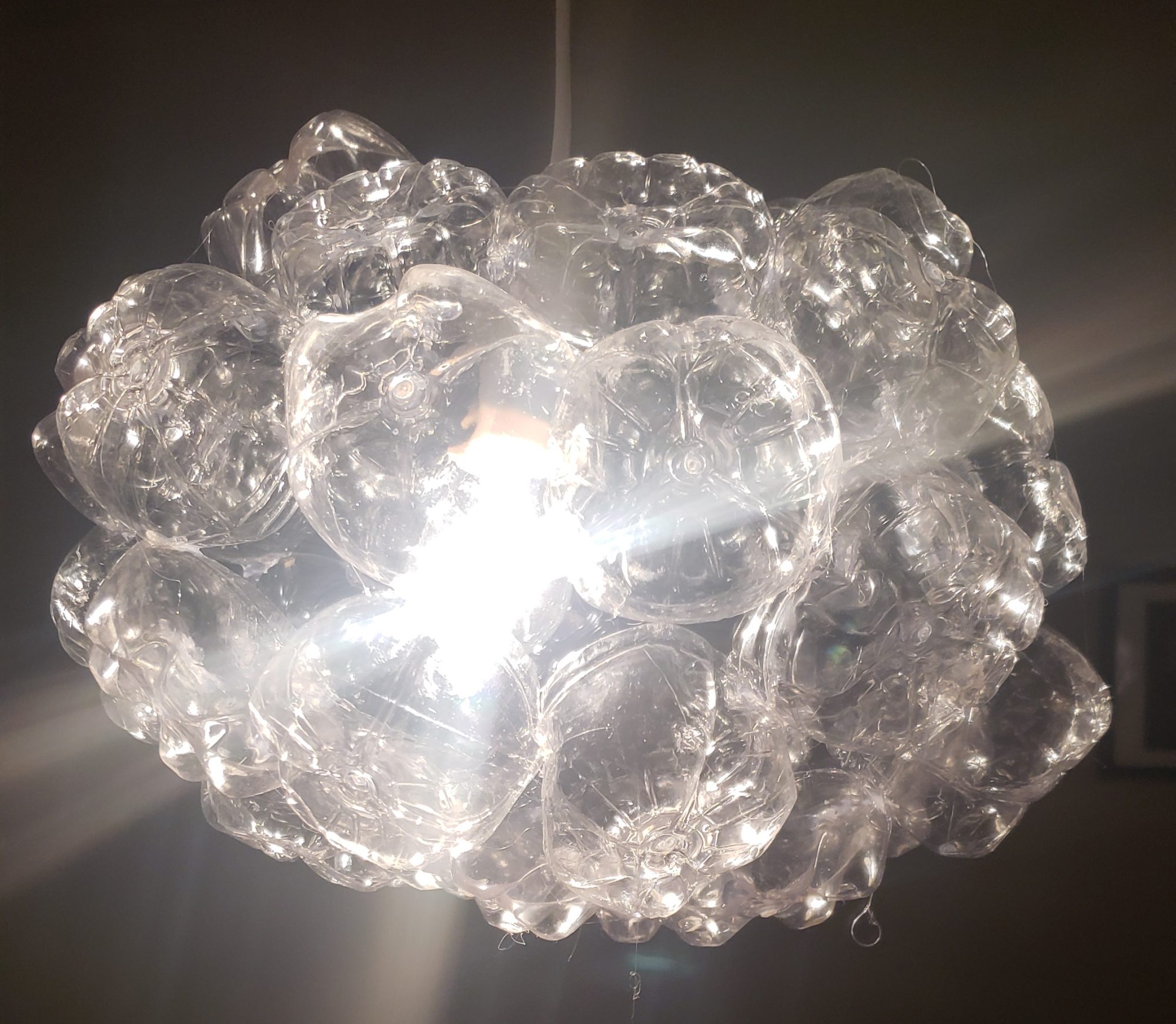 I wanted to get real use out of the artifact I made for this class, so I deliberated for a while on what I could make that I would use daily. Unfortunately, my apartment came with no overhead lighting fixtures, so the only light in my room comes from a lamp in the corner of my room; I decided to remedy this by making an overhead light. My roommate collected ~50 plastic bottles for a recycling project that never actually happened, so my main material was clear.

I originally formulated the following design, where I would form rings with the whole bottles and stack them on top of each other, forming a cylinder. After some testing, I realized that this would make the fixture very large while leaving very little room for a lightbulb at the center.

It was at this point that I browsed the internet for other people who have made overhead lighting out of plastic bottles, and came upon the following design(link) where an artist made a chandelier out of a semicircle of the bottoms of plastic bottles,

I started by cutting the bottom 2 inches or so off of each of my bottles.

I initially planed on making strips of these bottle bottoms and then combining the strips, but I realized that I need each bottle bottom to flex in two different directions to form a sphere, so I ended up gluing each piece on one by one, trying my best to form them into a sphere as I went.

I left a portion at the top of the sphere open so that the lightbulb could be changed, and considered for a while how exactly to secure the covering to the lightbulb. Since the enclosure was quite light, I decided to have it hang from the lightbulb with thread. I came up with a design where two sets of parallel threads would each be criss-crossed over one another to form a secure hold on the light bulb socket.

The final product didn’t come out exactly how I wanted, but ultimately I still think that it is quite interesting visually.

It is somewhat oblong, some of the bottle bottoms stick out more than others, and it doesn’t occlude very much light. However, the bottles still form an interesting “bubble” effect that I quite like to look at, and I learned a lot about working with thin plastic and hot glue.

Time permitting, I may redo this project from the beginning. If I did, I would glue 2 half spheres using a basketball as a framework for each, and then glue the two halves together. I would also probably spray paint or sandblast the bottle bottoms so that they don’t let through quite so much light.