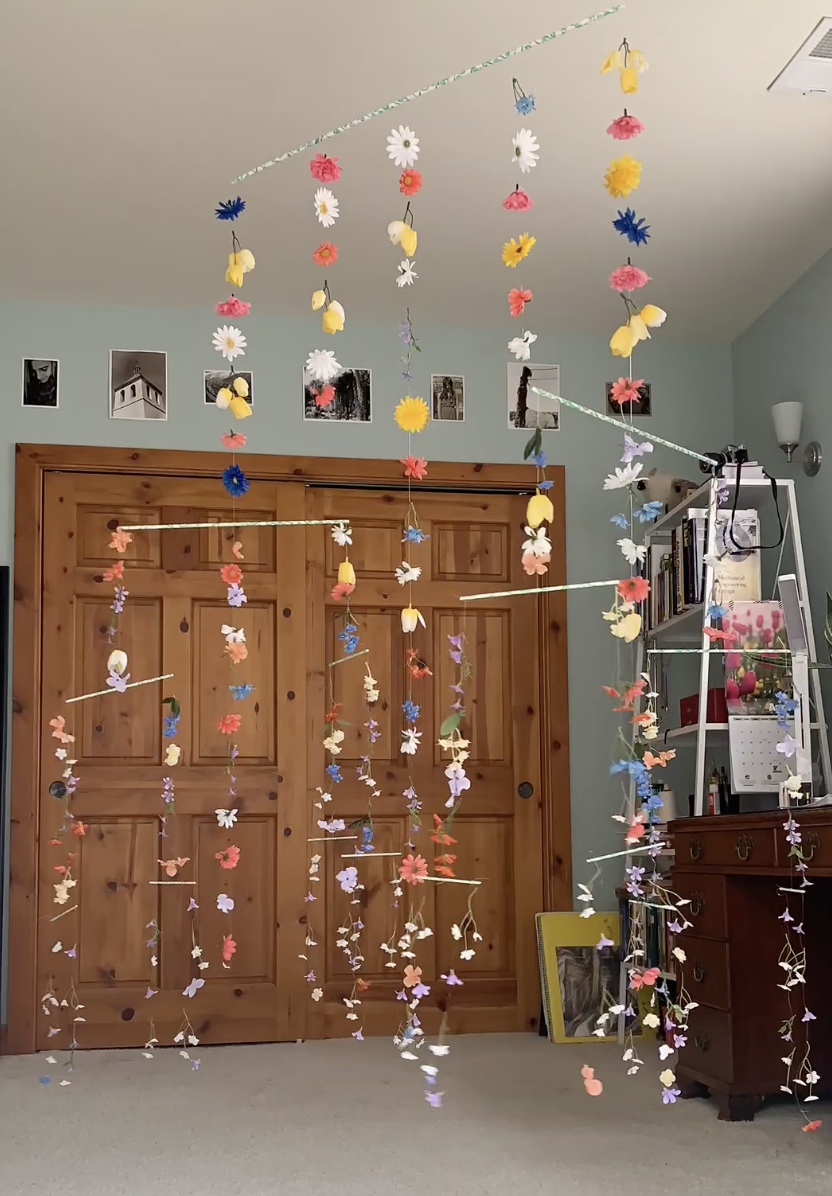 As seen in Part 1 of this report, I had to go through some early design iterations due to my own indecision and COVID-19. I also wanted to make time for user testing and another round of iteration once my piece was built. This caused my design process to have two main design loops, one for ideas and the other for building.

Because of this iterative process, I needed to manage my time very wisely and plan out each step far in advance.

As stated above, my design process was split into two main feedback loops, an idea loop, and a build loop. My idea loop was discussed in Part 1 of my report, while the build loop will be the main focus of this part (Part 2).

The first step of the build loop is purchasing materials necessary. I purchased a variety of fake flowers, four 36” wooden dowels of different thicknesses (3/8”, 1/4”, 3/16”, 1/8”), and 100 yards of clear “fishing line” (jewelry string). Other materials needed for fabrication included scissors, paint, and a drill, all of which I already own. The most important material of the project was the flowers, so I really tried to get a wide range of brightly colored flowers that did not look too fake. While real flowers would have been ideal, they are very hard to work with and not very delicate.

While I initially planned to do in-depth user testing and get lots of feedback on my sculpture, I was limited to testing with the users in my house (aka my family and my cat). My test basically included having people interact with the sculpture without any directions. My cat enjoyed playing with the bottom layer of flowers, but quickly got bored. From this, I discovered that my sculpture was durable enough to withstand a housecat. Meanwhile, human interaction mostly involved gently touching or pushing my sculpture so that it would begin moving. Once the sculpture started moving, the user typically stepped back and watched. I think that people interacted with it in such a gentle way because it looks delicate, however, given my heavy interaction during fabrication, I know that it is quite durable.

After my testing, I decided to review my own opinions and the opinions of my testers and see if it was necessary to iterate. I concluded that I personally had some issues with the spacing of the flowers on their strings and the sculpture was not as large as I wanted. I also got input via my construction update blog post.

To address the issues I compiled during my review step (not enough flowers and flower spacing) I continued to iterate. Thankfully I had extra materials, so I did not need to buy anymore. As for fabrication, I added a final layer of flowers (going from 3 to 4 layers) and I took apart my first layer of flowers (the flowers hanging from the top dowel) and re-did the flower strings so that the flowers were more spaced out. Between these two changes, my sculpture almost doubled in height, finally reaching the floor, which was my goal. I also added more strings of flowers through the centers of the dowels, instead of just hanging the flower strings off the ends of the dowels.

While I achieved almost all of my goals, I wish that I made some slight alterations to the mobile design before I started building. If I could do this project again, I would have broken every dowel twice as many times and worked in a more 3-dimensional shape. This is to say instead of working off a singular, linear dowel, I would have made a cross out of the dowel and then worked downward. Therefore instead of my top dowel structure being 36” long and 3/8” wide, it would be 18″ by 18″.

I am currently enjoying my sculpture in my bedroom. I have a small fan and when I turn it on, the sculpture slowly starts rotating around, which is quite mesmerizing. Despite the personal joy it bring me, seeing it on a daily basis, its large size makes it somewhat hard to maneuver around, so I plan to move it to another place in my house and or place it outside once the weather is consistently nicer. I am very intrigued by placing my sculpture outside because I think it might interact well with a light breeze.

Due to the fact that I am a first-year grad student, and have many more years of grad school ahead of me, I hope that either the ATLAS or Engineering Expo gets postponed to this coming fall so that I can still show others my work.