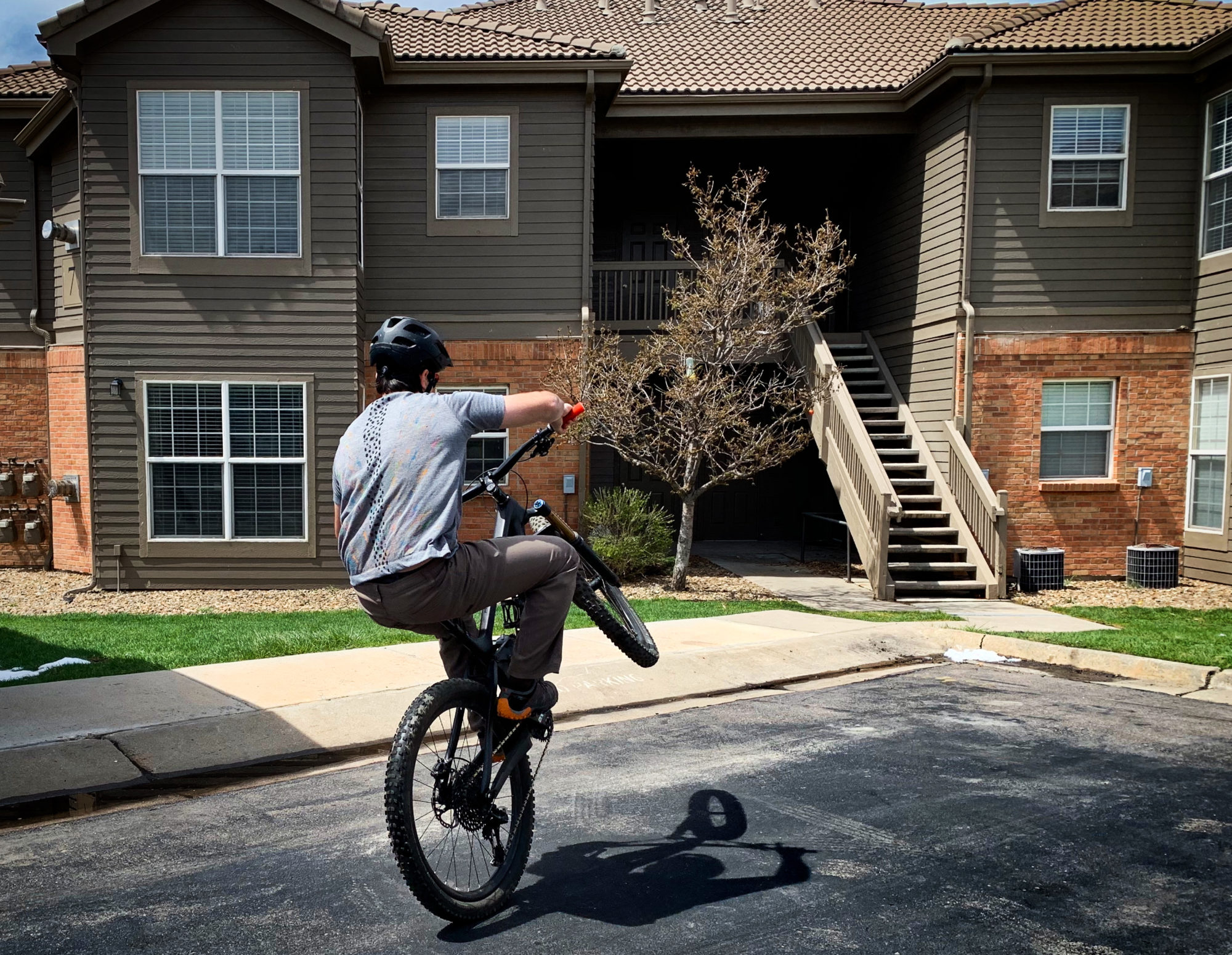 My project is a mountain bike jersey/t-shirt with an action painting and symbolism aesthetic.

My last post has all the details of what it is and how I made it (the whole process!). This post will contain a little more details on why I chose this project/aesthetic, and what will do next; plus some reflection on the class this semester.

First, why did I choose a mountain biking jersey.

I have been around biking my whole life. Since I was a little kid racing and meeting Greg Minar (most decorated downhiller of all time) to now coaching for Boulder Junior Cycling and everything in between. Below are some images to show you this.

Figure 2. My dad and I meeting Greg Minar back in the day

Figure 4. Our engagement pictures a couple of years ago.

So needless to say it is a passion of mine. I also wanted to challenge myself, and try something new. Sewing was new to me, so a bike apparel item seem like the perfect idea. Plus, with graduation on the horizon, I thought it would be a great way to open up some new doors in the cycling industry, as I want to pursue that.

I originally had set out to make a ultralight/packable rain/wind jacket for mountain biking. Like I describe in my previous post, this would take maybe a little longer than the scope of the class. So I decided to make a bike jersey/t-shirt. Once I had decided this, I looked into my aesthetics.

After some searching, I chose action painting. The idea was to use this aesthetic to re-create the splashing of mud on the back of the shirt with some touch of color. The term “action painting” was coined by the American critic Harold Rosenberg in 1952, in his essay “The American Action Painters.” According to Rosenberg, the canvas was “an arena in which to act.” Over the next two decades, Rosenberg’s redefinition of art as an action rather than an object, a process rather than a product, was influential and laid the foundation for major movements to come such as Fluxus and Performance Art. This definition of art as an action rather than an object fit PERFECT with re-creating mud splash on the back of the jersey as one rides through the woods. Below is a picture of this action last summer at Crested Butte.

Figure 7. Splashing around on bikes.

After finishing with this final project, I was very pleased. Below a couple of pictures of the jersey/t-shirt. There are a couple of things I would change (like fixing up the neck and pre-washing the fabric before sewing), but overall, I am really happy with it, and not only with the final product but with the process.

Figure 8. Back of jersey

I picked up lots of new skills throughout the length of this class, some being laser cutting and sewing. But looking back at the semester and reflecting, I took away much more valuable skills. That is, learn by doing, don’t overplan, dive in and fail, fail often and learn quickly. It was truly my favorite class I’ve taken at CU. It is a class that you truly get out what you put in, and for me personally, I think I got more out than I put in. (That’s not saying, I didn’t but in effort, just saying I got a lot out of this class).

For the project itself, it is done and now I will wear it and enjoy it. But with the skills and confidence gained, I plan to make other things and perfect this one. Things I plan to make are that ultralight jacket, climbing backpack, and a few other projects. As for me, well, this class and semester have come to an end. I will be graduating in a few weeks with my master’s (virtually, because of the unforeseen quarantine), and off to the next chapter of my life.

I hope you enjoyed following my project, and as always, thanks for reading.

Video of my zoom class presentation: