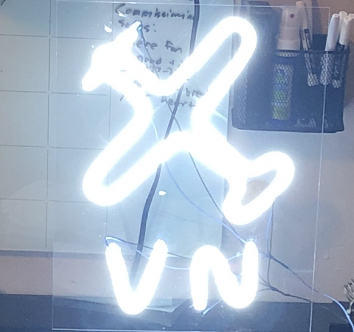 For my final project I designed an LED neon sign. This was not my original design; until mid-March I had planned on constructing a wooden propeller. My original project was inspired by my love for aviation. The propeller is a classic symbol of aircraft; it is even used to symbolize the heritage of air power in the United States Air Force.

One such example of this is the prop-and-wings each officer cadet wears on their uniform (above). I wanted to commemorate this heritage by creating a piece of art that I could display on my wall. My design was based off the instructions found on “Make a Wooden Propeller” on instructables.com, but I planned to add my own color scheme and sizing. The initial CAD for my project can be seen in the image below.

After the closure of campus due to COVID-19, it became impossible for me to complete this project. For this reason I had to search for a new project fast; we were already a couple weeks into the ideation process and I had to catch up. My inspiration for my current project came from watching Chris Lehr’s design review presentation. While watching his presentation I thought about how I could save the aviation aspect of my previous project by creating a sign. My original thought was to make an American flag with the unit I am going to be a part of at flight training, the 80th FTW, incorporated.

After some thought, I decided I wanted to make outlines of aircraft with the program name “ENJJPT”. My final design also included the unit as well and can be seen below. This design implements a minimalist aesthetic; each element is presented without ornamentation. The colors I chose lend to my patriotism, bringing in the colors and aesthetic of the stars and stripes.

I haven’t been able to finish construction on my project yet due to not having the proper safety gear to deal with superglue fumes on such a large level. I am working to borrow a chemical respirator from the University, but I have not had any luck yet. Everything else is complete on the project, I just need to glue the light strips down. I was able to create a proof of concept as a birthday gift for my friend though, which can be seen below.