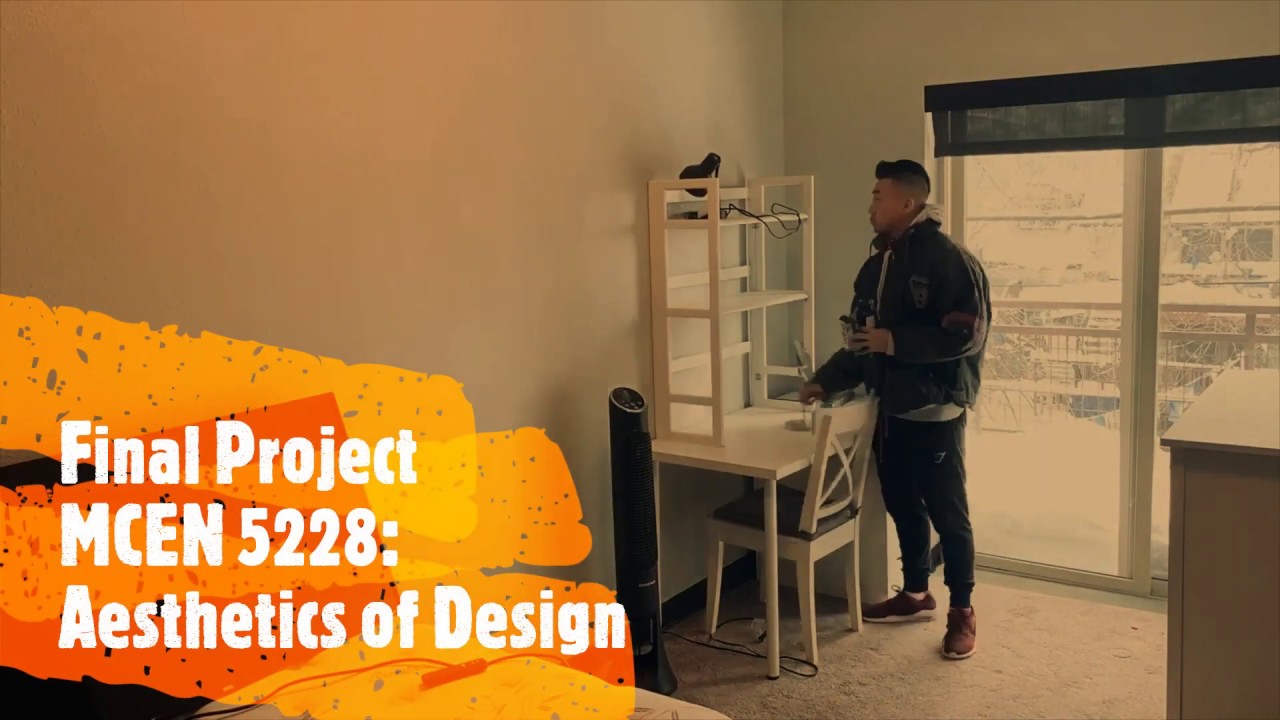 The Executive Summary can be summarized by the following Time-Lapse video:

The following report will entail the specifics of Part 1 and Part 2 of the Final Project in MCEN 5228: Aesthetics of Design, instructed by Professor Jean Hertzberg. The differences between Part 1 and Part 2 aren’t too different, except for the fact that documentation of the design process (via timelapse) was improved upon in Part 2. Most of the report retains the information from Part 1, except for section VI: Part 2 Report Edits, Presentation, and Closure, feel free to skip to this part of the report if you have already read Part 1. The report will detail the documentation from both pre-COVID-19 as well as post-COVID-19 processes, as they are of importance for the overall timeline and culmination of learning experience garnered from the project. Moreover, this resembles a real-life scenario similar to a company in budgeting season, finding meaningful work to justify salaries amidst unfortunate times likes these. To begin, dating back from 2/19, the project needed to satisfy the following requirements:

The overall vision would refurbish the guitar in figure 1, mainly the body which is not aesthetically pleasing currently, and then overlaying that aesthetic to all the other components. The aesthetic itself of the body, then is very important and a number of aesthetics have been played in my mind. Looking my planned aesthetic, I hope to combine a streamlining aesthetic with a modern matte black aesthetic, both considered at their respective points as very modern aesthetics. Streamlining aesthetic (figure 2,3) has a very shiny, curvy, and aerodynamic look to it, naturally intrinsic to electrical guitars I feel. The aesthetic emerged in the 1930s and was used in industrial design, namely: railroad locomotives, telephones, toasters, buses, appliances, and other devices conforming to the sleek and modern impression. The electrical guitar itself was developed in 1932, so I believe this type of aesthetic is very fitting for such a piece.

Like many others, COVID-19 has affected my project and de-scoped it from it’s original vision. The main issue was having something functional/completes a task/dynamic at the end of the project. I had been looking at Guitar Wood Experts and looking to order soon[3], their woods range from $25.00 to $200.00, but they did not respond to my order, so I had to find a cheap $20 piece of Plywood that my friend had. It took 10 hours alone band-sawing and outlining the frame of the body itself (figure 11) out of the hard and inexpensive plywood I have outlined the cuts needed for the neck and bridge pickup, bridge, and electrical components that go into the guitar body itself, from the SolidWorks file that I had, in previous. Hand-making the rest of the guitar will be the equivalent of a 50 hour work week, that I do not think is plausible, given I have 3 other spring graduate courses that have also had major changes, largely not in benefit, as they are mainly engineering courses. What I do have – is CAD renderings of the electrical guitar body that I was originally going to cut, with the ITLL CNC machines. My current progress on the construction of the electrical guitar body is at the top of this post. As you can see, it has been difficult with rudimentary hand tools. Below I measured the current depth that the neck of the old guitar had with the previous electrical guitar body and marked that depth on my drill bit accordingly (Figure 6-8).

Part 2 of the report sees the removal of the watermark of the last timelapse video in Part 1. There are also added annotations that will help voice my manufacturing process of trying to hand-make an electrical guitar. Part 2 also sees the upload of the presentation done in Zoom, this recording on 4/27 can be found in the slack channel: Pod B (Figure 12).

Figure 12: Screenshot of zoom recording of 4/27 presentation, found in Pod B slack channel.

Further documentation comes in the form of the CAD done for this course, seen in my SolidWork’s feature manager table in the type of features I used to design my guitar renders (Figure 13, 14).

Closure comes in the form that I had given a very honest effort in carrying out initial project completion under the circumstances that came up throughout the year. The completion would have came in the following steps:

I feel as though I still, in part, accomplished the class requirements following:

Overall, I learned a great deal from this project and the design process involved in making an aesthetic artifact. I satisfied the project requirements, in a way, as mentioned in section VI. I do believe there is room for improvement, and I do plan on finishing this guitar in the near future. Lastly, I want to thank you professor Jean Hertzberg for the guidance that she showed in project closure, in the face of unprecedented circumstances.