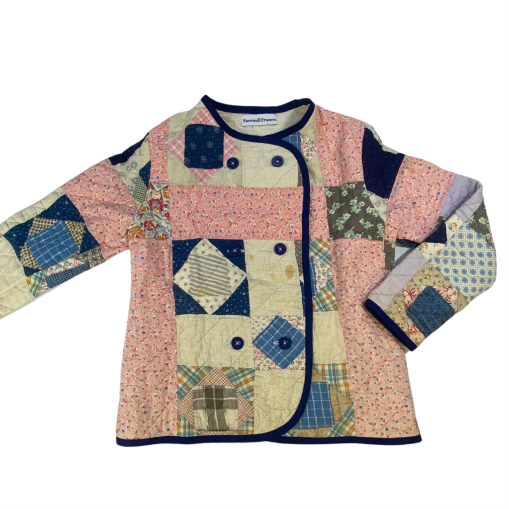 The Patchwork Aesthetic ranges from professionally made, highbrow, works of art to strictly utilitarian pieces. Often it is a mix of both, providing something with tangible uses while still being aesthetically pleasing. At its core, the Patchwork Aesthetics relies highly on sewing which can be traced back to around 25,000 years ago. It was a necessity in cold climates to fabricate clothing and bedding out of many animal pelts both big and small. Even just a few centuries ago the same held true, the image below shows a native American blanket made from rabbit pelts:

This aesthetic also evolved overtime manifesting itself as quilting in Europe and European Colonies like India. These quilts were often given as gifts for events such as weddings or other celebrations from people of a higher class. Since there were not sewing machines at this time quilts would take a long time to produce. This made many people share the work and would often act as social gatherings. An example of a British quilt is shown below:

As with many other concepts the Patchwork Aesthetic began out of necessity and eventually became a sort of luxury item for those who could afford it. However, that is not to say that member of the lower class would not still use this concept out of necessity. It was often cheaper to patch old clothes than buy new ones.

In more recent decades globalization has led to the phenomena of fast fashion. In this process other country’s labor, primarily in southeast Asia, is exploited for capitol gains. While this in and of itself is a major issue, waste is also a dire consequence. This waste is one of the major inspirations for my Upcycle project. The picture below illustrates this issue in Shanghai:

I have been doing Martial Arts since I was young and have consequently had many different uniforms, Gis, as I grew. However, I never threw those uniforms away; thinking I could one day find a use for them. The Upcycle Project is a great chance to repurpose all the uniforms I have and not contribute to textile waste. I want to project these ideas of the Patchwork Aesthetic in a utilitarian project while maintaining the traditional Asian inspiration found in my source material of the Gi.

This is not an original idea in taking old textiles and repurposing them into something that fits the Patchwork Aesthetic. Companies like Farewell Frances repurpose quilts into high quality clothing. One of their products can be seen in the picture at the top of this blog post. Some of the inspiration for me choosing this aesthetic for my Upcycle project also comes from things I already own. The picture below is a pair of shorts made from random scrap textiles:

While I did not make these myself, they are great example of the aesthetic I am reach for in my project. I also have a few small, quilted mat that I use as decorative pieces. An example of this is shown in the following image: