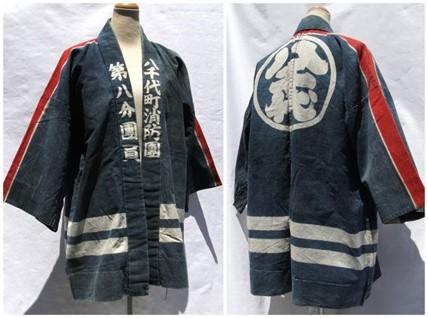 I have chosen to use the same aesthetic in my upcycle project that I wrote about during the aesthetic exploration blog post on, that being the Patchwork Aesthetic. However as to not restate what I have already covered in my earlier post I want to discuss the other source of inspiration for my project.

For my project I did not just want to sew a bunch of scrap fabric together, it should resemble something. I thought what better to use as inspiration that the source of my scrap material, old Gis. Below is an image of a GI for those who are not familiar:

The common word Gi is an abbreviation of the more traditional Japanese word Keikogi. Its roots break down as ‘keiko’ meaning “practice” and ‘gi’ meaning “dress or “clothes”. These uniforms were used primarily in Japanese Martial Arts and their descendants such as Aikido, Judo, and Jiu-Jitsu. It was not until the 20th century that Chinese Martial Arts such as Karate adopted this uniform. While the Gi has gone through many different iterations, the modern style of the Gi was designed in the late 19th century by a famous Judo practitioner as a uniform that can hold up during the explosive throws in the Judo system. It is speculated that his inspiration were the hemp jackets that Japanese firefighters used. The following images shows a 20th century Japanese Firefighter Coat:

As I stated above, different forms of Martial Arts have their own interpretation of the Gi. The most important difference is the thickness. Often times they can be categorized into either single weave or double weave Gis. The single weave material is good for systems that involve more striking, allowing one to get the Gi to snap like a whip. However, single weave Gis will easily tear when grappling. This is when double weave material is used to allow for more durability. The differences between these are shown below:

For my project I am going to make a Bomber Jacket since I have always wanted one. These jackets have a couple of specific features that I am going for in my design: no hood, thick collar/cuffs/waist, and a silk like liner fabric. These features are depicted in the image below:

The last part to make this blog post come full circle is to discuss how the traditional Japanese Keikogi will be used to influence my patchwork bomber jacket. Two aspects of the Gi that I intend to bring over to my upcycle project are both having no zipper and the classic overcut in the front. These go hand in hand as Gis have the overcut in the front to allow a belt to hold the front together. In my project I plan on using hidden buttons. My stencil for half of the front of my project is shown along with some buttons below.