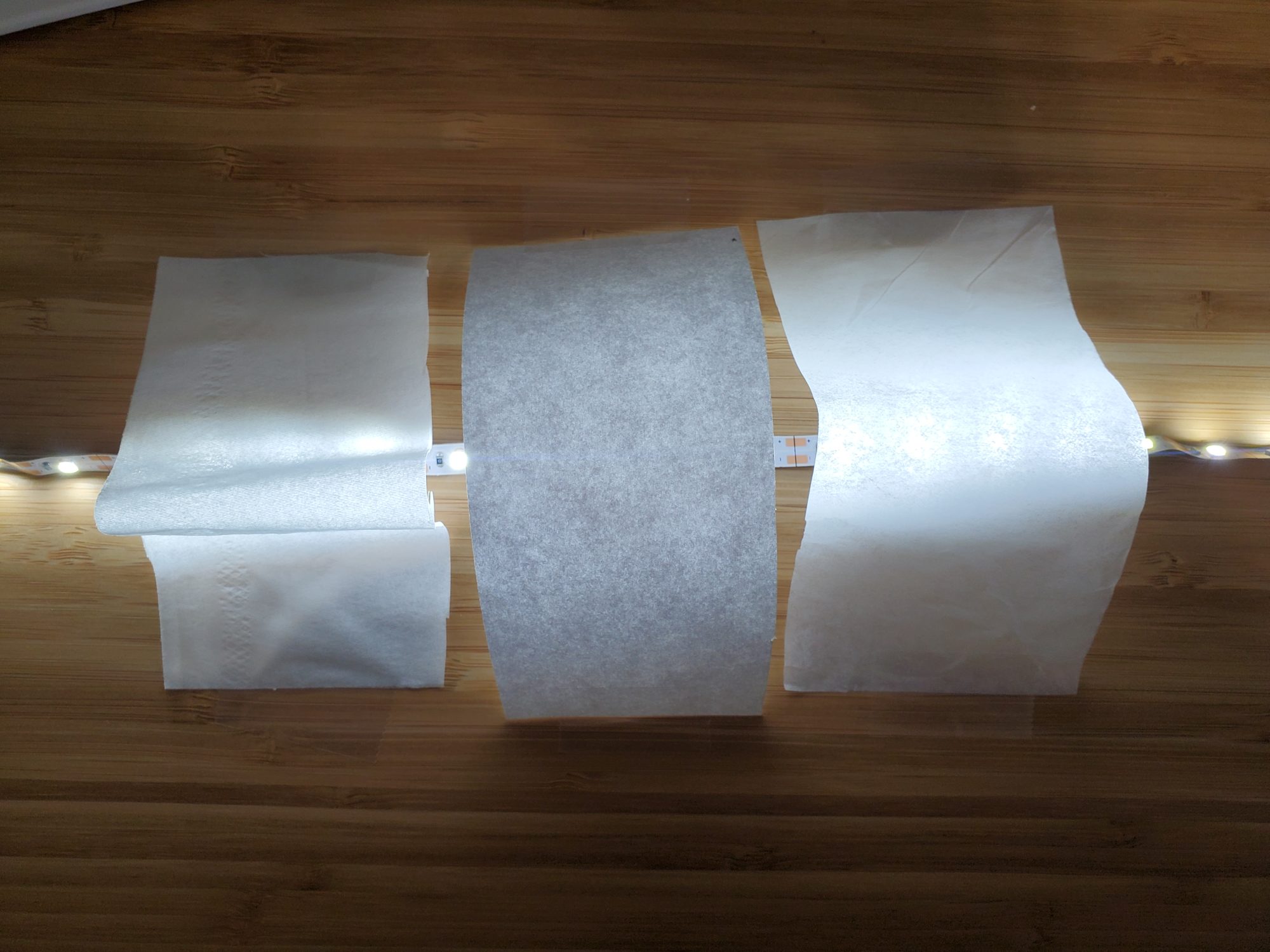 I decided to do a lighting study on ways to diffuse the light. Diffusion is absolutely key in achieving the intended aesthetic. Without proper diffusion, the lighting is too harsh and stands out so much to the point that the lights are more of an eyesore than anything. This is where adding LED strips usually goes wrong in similar projects. Diffusion is key.

For the purpose of this test I used an extra LED strip I had laying around from an old project. Note that the light is so concentrated and intense that the individual lights each create a very strong lens flare. While these specific anamorphic style flares may be reminiscent of a sci-fi film, they do not fit the overall intended aesthetic. They are very straining on your eyes to have lying around like this.

In an attempt to diffuse the light, I choose three different materials to test. On the left is Kleenex tissue paper. Middle is printer paper. Right is gift tissue paper. Since the papers are resting directly against the lights, the intended diffusion effect is not achieved.

Using tape to create a dome with each paper, the intended effect was achieved. The added space between the light source and the diffusion material allowed the light to diffuse before hitting the paper. The Kleenex tissue was very flimsy and did not properly take the shape. The gift tissue was slightly better at maintaining rigidity, while the printer paper was the most rigid. Based on this test, the printer paper yields the best result.

To get an idea of how the diffusion paper could be implemented, I created a test using a clear container from some delicious sorbet. A key observation is that the printing on the surface will need to be removed since it clearly shows through the paper. For this test, printer paper is on the left and gift tissue is on the right. Kleenex tissue was not studied due to poor results from the previous tests.  Both materials work well, with positives and negatives for each. The printer paper does not transmit as much light, but has a smoother effect. The gift paper lets more light bleed through, but shows wrinkles easily. In both cases, proper distancing from the light source and the diffusion material was not achieved, which is causing the diffusion effect to be less effective.

Diffusion material must be separated from light source

Paper or gift tissue are both effective at diffusing light, while Kleenex tissue is not recommended

Markings on shaping device must be removed