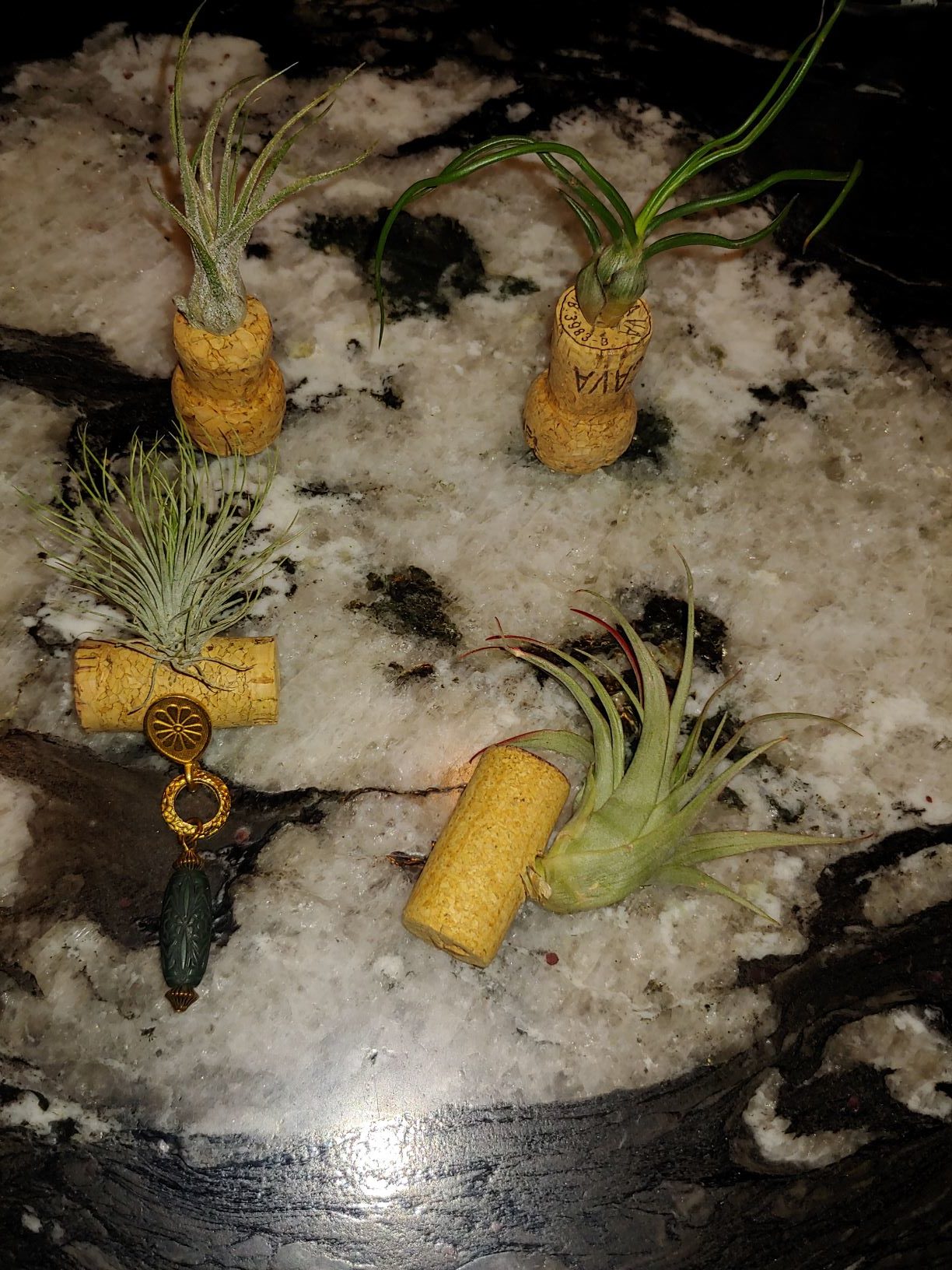 The first step of this project was actually looking through all the material I currently have and to decide from there which ones and how I would like to use them in the project. I grabbed all the air plants I currently have and looked at how I would like to orientate them as well as the wine cork shapes that I think would compliment which plants best. I also looked at which way I would want the cork to see which would look better in a horizontal as well as vertical configuration.

Figure 1: Layout of plants with the wine corks.

Once I had a basic idea of how I would match the plants with the wine corks and their configuration I decided to make the hole that the plants would sit in the wine cork. To make the hole in the wine cork I used a drill bit to remove material from what I eyed to be the center of the cork. I will note that I did not use a power drill I just turned the drill into the cork by hand. By doing this I was trying to control how deep I truly made the hole as well as knowing that trying to limit the amount the drill bit  would deflect into the hole that was already made keeping me from making it wider.

Figure 2: Making the hole in the wine corks.

I then started to go through all of the old jewelry I had gotten from my mom to choose which pieces I would like to use. Keeping in mind that I wanted to use jewelry with shapes and colors that could be considered neutrals since these are pieces that I would potentially want to keep out in the kitchen for years to come. This was probably one of the harder things to go through since I did not want to necessarily want to ruin any of the pieces, but a lot of what I have doesn’t necessarily match the styles I was looking for. I found one set of earing’s that I liked the detailing on and then also bits and pieces that I will need to take apart to use the things I enjoy.

Figure 3: Pieces I have chosen to use.

Once I began to attach the jewelry to some of the wine corks I decided it would be a good time to attach the magnets to the corks to ensure I liked how my planter magnets where coming out. To attach the magnets I used gorilla glue that was around the house and waited an hour for it to dry before setting the plants back in. Once I began to set the planters on the refrigerator I realized that I enjoyed having the plain corks with just the plants in them, but that really isn’t something that would be pushing the box. I am now back at the drawing board to decide what I would want to add to this design to make it something new and creative.