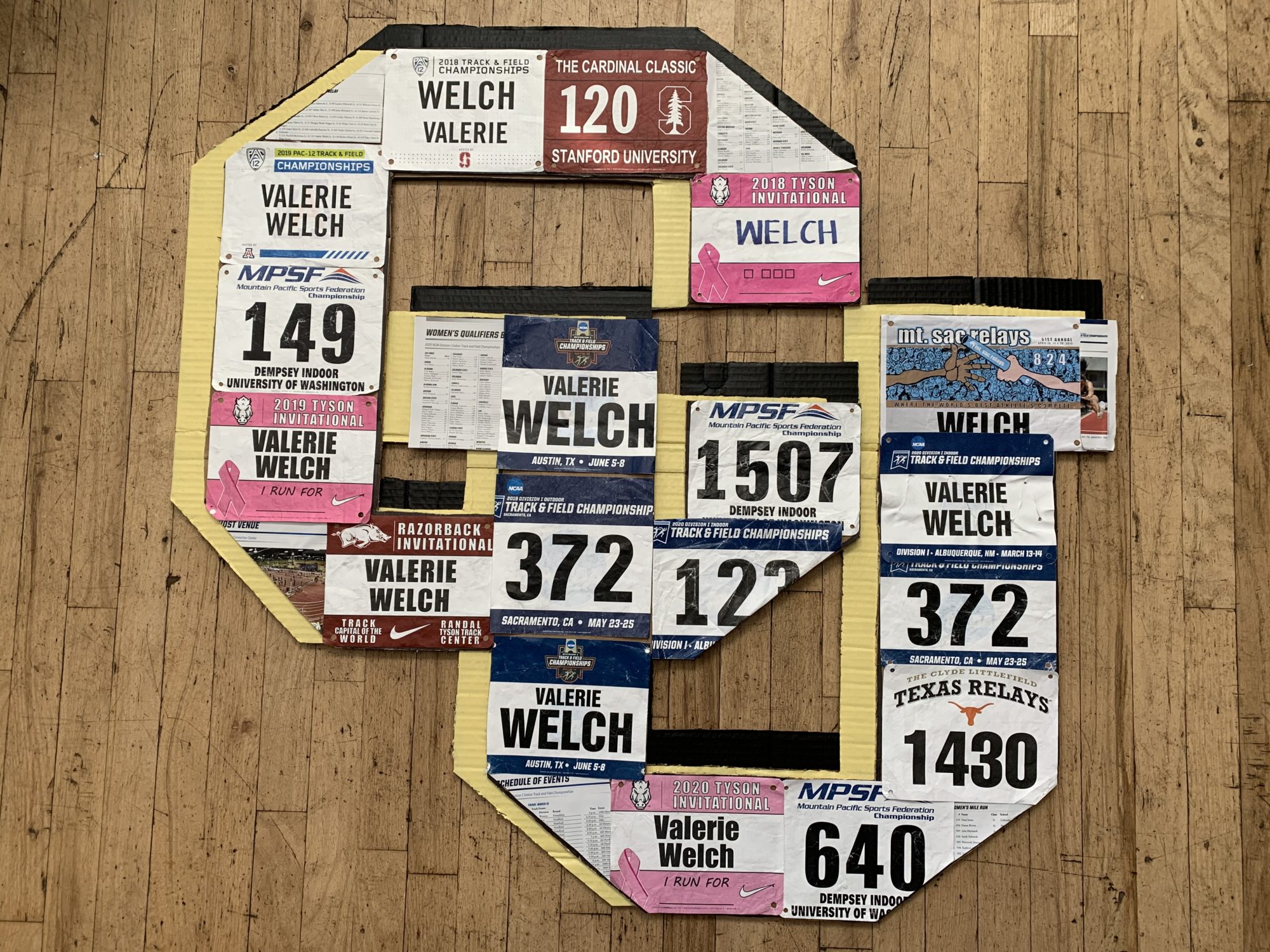 Ode to Track and Field

For my project, I decided to upcycle cardboard boxes that I already owned and the racing bibs I have received over the last three and a half years into a work of art embodying the old school athletics aesthetic. The inspiration behind this came from running my last indoor track meet at the University of Arkansas. I have travelled with the team to this meet every year since I began college and had a sad realization that it would be my last time there. I realized that every meet I go to from now until graduation will be a “last”. So I decided to make a memento to commemorate my time as a CU track and field athlete. I wanted to put them in the pattern of the older CU logo to add to the old school feel and also because I think it would’ve been difficult to construct the Ralphie logo out of rectangular shapes.

First, I gathered all of the supplies for my project and created the layout that I wanted my racing bibs to be in. The two images below show my racing bibs in the layout of the CU logo and the other materials I have to fill in the blanks. One is a newspaper article from my freshman year of college (I have 2 copies, don’t worry) and the other is the meet schedule for the 2020 NCAA D1 Indoor Championship meet that I attended last March. I was originally going to use both my high school and college memorabilia but decided to use just the things I had obtained from collegiate track and field instead. This is because the logo is for CU and really the two experiences are completely different. My college career deserves its own artwork.

I then used the CU logo as well as the bibs themselves (as they have a fairly standard size) to draw out a large version of it on to an old cardboard box (shown below). For size context, one bib is approximately 7.5″ x 5.75″.      I considered using wood or particle board for the backdrop, but found difficulty finding a piece large enough. At this point in the project I hadn’t decided the type of adhesive I would use. I considered a clear coat on top could be nice to hold everything together and give it a smooth finish, but perhaps just gluing the back side and leaving the fronts of the bibs exposed could add to the old school athletics aesthetic that I was originally trying to replicate.

I decided to just go with cardboard and cut out the outline shown above. Since a few pieces weren’t connected I decided to use hot glue to make it one solid piece (left picture below). This one piece was too flimsy however, so I decided to replicate the pattern with two other cardboards boxes. The middle picture shows one of the replicated logos and the right picture shows all three.

I then decided that instead of the two extra logos just stacking up behind the first to provide extra support, I would offset them from the top logo and paint the displaying edge in order to add a sort of frame and pop of color to the bibs. I offset the second logo about an inch and a half to the left and offset the third one about an inch and a half from the top. The paint colors (shown below) I had from a previous project I did over the summer. I decided the gold was a bit darker than I wanted and went for the light yellow and the black. I used hot glue again to stick the three pieces of cardboard together.

Finally, I arranged the bibs onto the cardboard (left image below) in a way to best fit them all without having to fold too many over or have too many gaps. I then decided to just use the meet schedule for the 2020 NCAA D1 Indoor Championship to fill in the gaps. I mostly picked pages that included information about me and my teammates to display so that the information was still mostly about my time as a track and field athlete, qualifying for this championship event being one of my biggest successes so far. The pages I chose are shown below. Some show my name and my teammates as qualifiers. Others just have generic meet information and NCAA track and field history. I had to fold these pages to fit the blank spaces. I tried to frame the information on the pages that I wanted to keep. The last photo below shows one of the pages being folded into shape.

I chose to use hot glue again to place these onto the logo. I didn’t cut any of the bibs, I only folded over some of the ones that didn’t fit exactly. I also figured out that the hot glue actually melts the plastic coated paper material that the bibs are made out of, so I had to be careful with application and apply a large area of a thin layer of the glue to the cardboard first and then place the bib on top. I decided to not glue down the edges of the bibs all the way since some of them overlapped, and the unfinished look gave me an old scrapbook/ yearbook feel to add to the aesthetic. The final product is below. I hung it on my wall at the end of my bed in my room. Overall, I had a great time making this project and now have a cool display of my racing bibs and other memorabilia from college athletics!