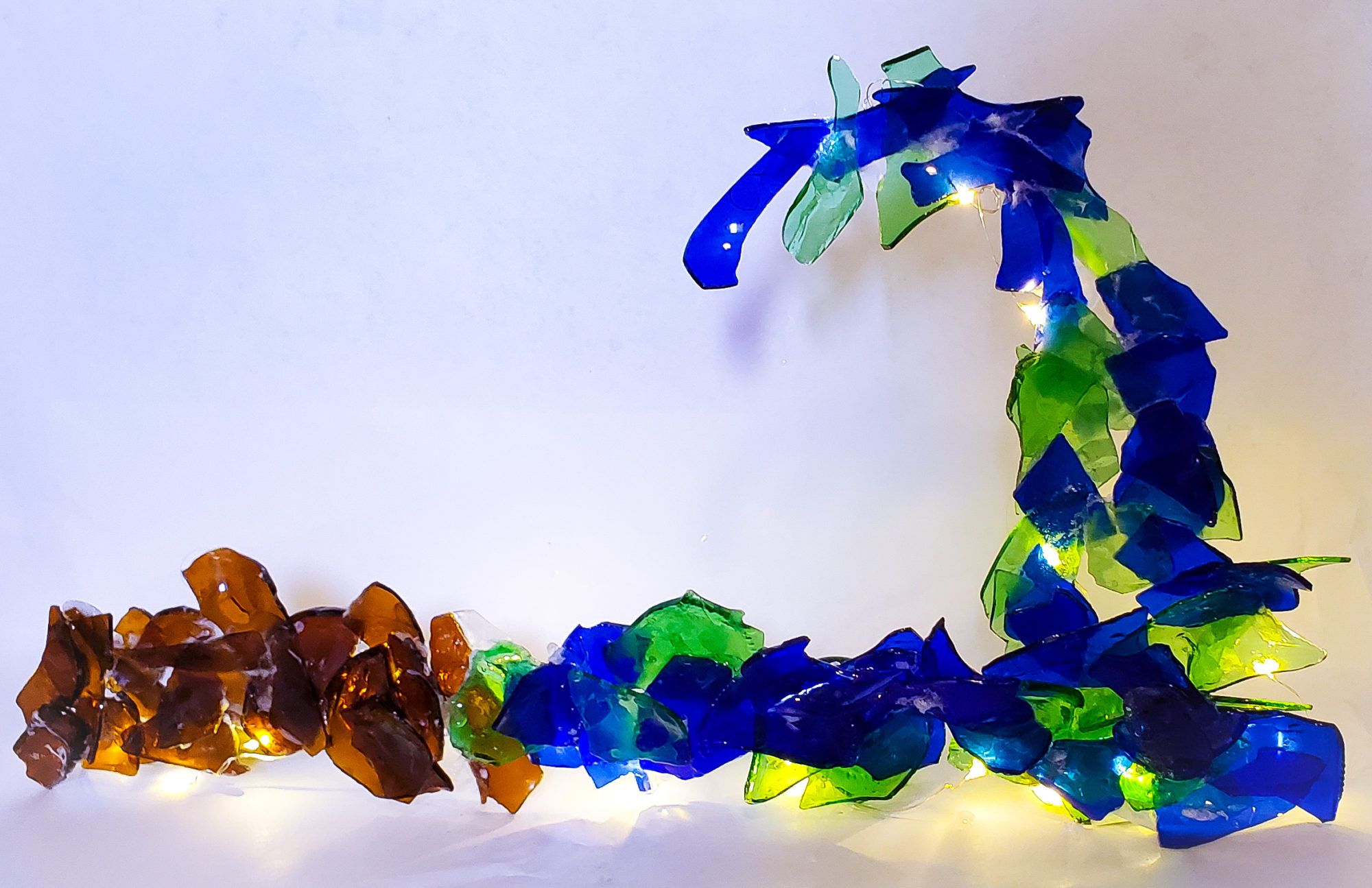 The first step in the process was to select the glass I was going to use. I chose to use a selection of old bottles that I collected that I had in three different colors. These colors were green, blue, and brown. I plan to use these three colors to create an ocean landscape scene.

The next step in the process was to remove the label from all of the glass bottles. This step proved to be more difficult than I had originally anticipated. At first I tried using a technique that I found on the internet that suggested using an olive oil and baking powder mixture to rub on the labels that would cause them to come off. When trying this technique I found it to be ineffective in removing the labels from my glass bottles. After this I tried a new technique that had me place the bottles in a pot of boiling water and add some dish soap.

This technique proved to be far more effective than the previous technique though it was also time consuming. One interesting thing I noticed during this was that each of the bottles, green, blue, and brown took different times for the labels to start coming off. The brown bottles were the easiest and the labels started to come off after around ten minutes. The green bottles were the middle and took about 30 minutes. For the blue bottles even after almost an hour in the boiling water the labels were still hard to remove. This leads me to believe that each of the bottles labels utilize different adhesives. Ultimately I was able to remove all of the labels off the bottles.

The next step in the process was to break the glass bottles. The way that I achieved this was by placing the bottles in a canvas bag and hitting them with a hammer. Although this was effective, one challenge that I encountered was that it was difficult to get glass pieces of a consistent size and I ended up getting a lot of pieces that were too small to use in my final product.

After this I tried to select the pieces of glass that I wanted to use in my project. After picking each piece I gave it a quick sanding with some 60 grit sandpaper. The reason I did this is because it both made the glass and final sculpture safer to handle, but as well it gave the glass a bit more of a worn look which fit well into the beach glass look.

After selecting all of my pieces of glass I tried to lay out the design that I wanted to create on a table. I did this in order to help me visualize the final result. As well this helped me verify that I had selected enough pieces of glass and to get a rough feeling for the overall size of my sculpture.

Upon completing this I continued to the final step which was gluing together all of the individual pieces. At this point I ran into a problem that I had not considered when designing my project. Due to all of the glass pieces being taken from bottles they all had significant curvature. This curvature made gluing the pieces together incredibly difficult since none of the pieces would fit flush against each other. In order to try to glue the pieces together I was using gorilla glue. The original bottle of glue I used did not turn out to be enough and I had to go get a second bottle. Ultimately I was able to get the sculpture to stick together by using an extreme excess amount of glue, but it was still not as sturdy as I hoped it would be. Looking back it may have been better to try to glue each piece to a solid back such as a piece of wood rather than trying to make a freestanding sculpture.

One final touch that I added before I took the final photo of my project is that I hung some spare lights that I had on the back of the sculpture. This created a nice lighting effect through the glass. At the end of all the processes my final result was a large glass wave created using green and blue glass against a beach foreground created using brown glass. The sculpture is a mix of 2D and 3D with the glass curvature creating a wave like pattern.

I think that I was able to achieve both my functional and aesthetic goals for the project. I was originally worried about the wave being recognizable, but I think that it ended up looking good. One thing that I do think functionally could have been improved is the look of the beach, but it was difficult to shape due to the gluing issues mentioned above. In terms of aesthetics I think the combination of the glass, colors, and ocean landscape do a great job of capturing the tropical aesthetic. For the future I plan on giving the sculpture to one of my friends as a gift.

Andrew Thorson
Next Post
Ode to Track and Field