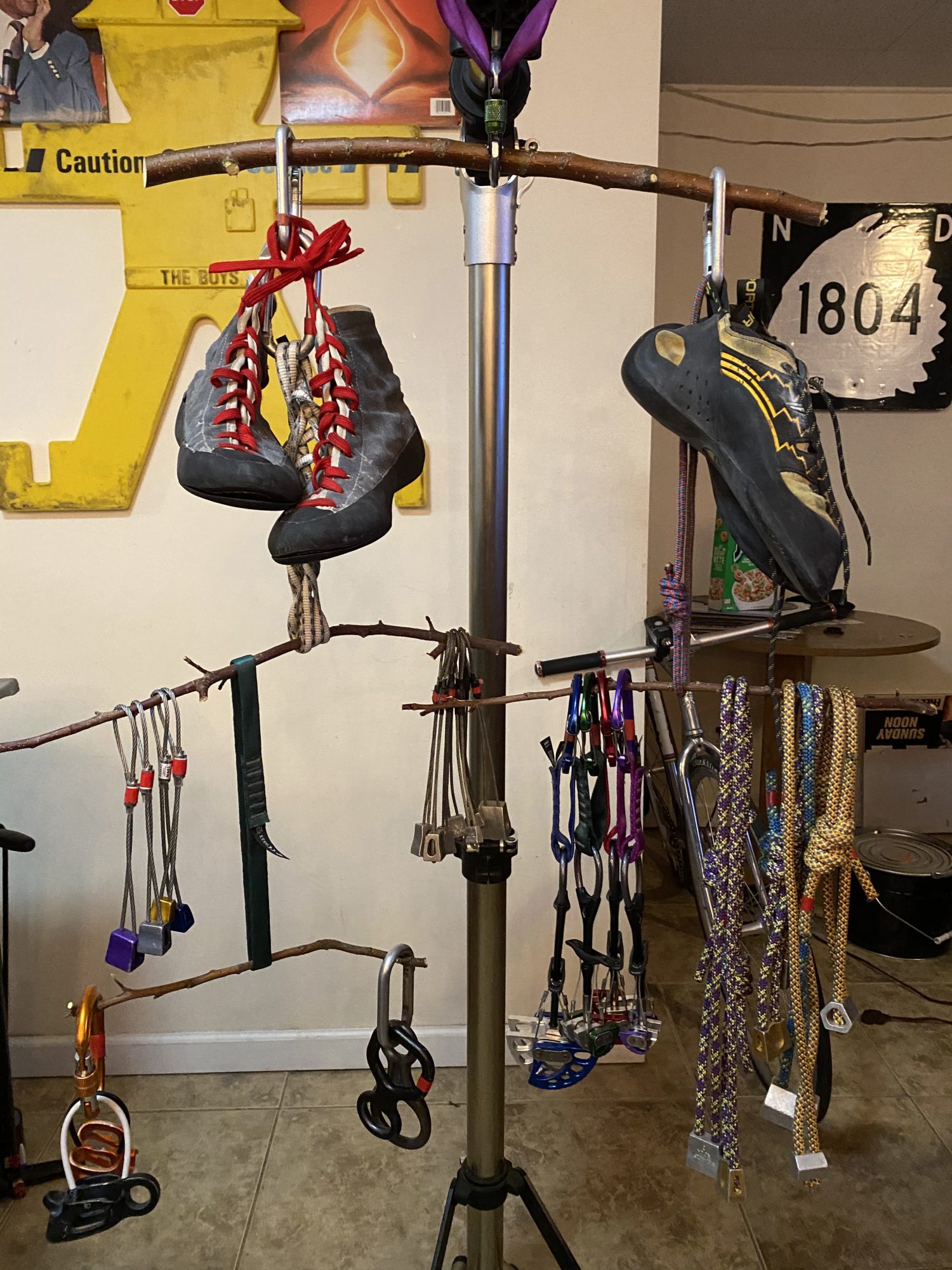 As mentioned in previous progress posts, I constructed a mobile out of old climbing gear.  The aesthetic that I was striving for was that of the climbing gear itself.  I wanted to both show the beauty of it due to the inherit simplicity, and the fact that it hadn’t changed much over the years.  I thought that the best way to represent these themes was to make a mobile that showcased the perfect balance of the old and the new.  I already had the modern gear as I used be be an avid trad climber.  In recent years I haven’t been as much but keep the gear around in case I have the hankering to go again.  I received the old retired gear from my father who also used to be a climber back in his prime.  All of his gear is from the 80’s when he was in college.  Looking at the gear it is clear to see that although materials and technology has changed, many of the designs at the heart of the gear has remained the same.  My goals for this project were all artistically driven.  I knew that my mobile would not have very many if any practical uses.  For this reason I knew that I really had to try to make it visually pleasing and fitting to my chosen aesthetic.  The one artistic element that I could not control however was the color of the items.  Ideally I would have liked to have a matching color scheme for the project.  Climbing gear has very specific uses of color to be able to quickly identify which size of gear you are looking for on the wall.  Most experienced climbers memorize all of the colors of their gear and what size they represent.  As for the red tape on each piece of gear in the artifact; they are used to denote my gear from a climbing partner’s incase we have to combine pieces for a larger climb.

To go along with the outdoorsy climbing aesthetic,  I decided to use sticks as the rods to hold up the mobile.  I harvested the sticks locally from my front yard so my total cost for this project was nothing.  The sticks also varied in size which I thought was cool so that they didn’t all look exactly the same. I had a limited amount of tools so I had to cut the sticks down to size using a hack saw and some wire snippers.

The first thing that I attempted to do was weigh all of the pieces that I wanted to use in the project and calculate approximate locations using a  balancing lever equation.  I started with the bottom most stick, and worked my way up including each lower level into that calculations for the above ones.  This only got me so far however since the sticks were all different thicknesses and were not straight.  I got a good idea of what would balance as a start though.  After that I had to play around with the alignment of each piece to get it to perfectly balance.

I experimented with different string to hang up the items and sticks with before I figured out which I wanted to work with.  I ended up going with a series of carabiners and runner for the final design.  This allowed me to assemble the entire artifact without a single knot or glue.  I was relived about this point, because although cool, I will eventually want to disassemble the project to once again use my climbing gear.

After cutting all the sticks and running my rough calculations, I stated assembling the mobile from the bottom up.  The reason for this is because the upper sticks relied on the weight of the lower ones to balance.  This turned out to be much more challenging that I had originally predicted. Without gluing anything, I had to try to hold the stick in one hand and load either end and adjust until it balanced.  Then after I finally got one balanced, I couldn’t put it down or else the entire thing would fall apart.  To overcome this challenge, I recruited a few of my roommates to hold things while I assembled them, and I also installed hooks into the ceiling of my basement to hold individual components while I was assembling others.  The ceiling was not strong enough however to hang the entire mobile with the hooks that I had laying around.  To hold the entire project up I used a bicycle work stand which ended up working perfect.

Two levels hanging from the ceiling (7)

I had to carefully select the components that I wanted to balance each other out.  To go along with the aesthetic I had set out to accomplish, I wanted to use the modern and retro gear on opposite sides of the stick to literally balance each other out.  For example, I used my father’s retro high-top climbing shoes on the opposite end of my modern shoes, and similarly did the same with the belay devices and stoppers.

Retro stoppers, and belay devices balancing out their modern counterparts (8)

With the help of my roommates, and after many, many attempts, I was finally able to assemble the final artifact.  The most difficult part was trying to get all of the gear to stay in place and not want to slide off the end of the sticks.  Initially I tried notching the wood so that the carabiners would sit in the notch and not want to slide off.  I quickly realized that these notches affected the balance of the system, and did not allow for the necessary micro-adjustments needed for the perfect stabilization.

Overall I am pretty happy with how my upcycle project turned out.  I was surprised how perfectly balanced it ended up and how my chosen aesthetic came across.  In total there are 4 independent balancing sticks and over 5 pounds of gear.  I was not expecting it to be so large but the size really wasn’t an option.  When thinking about the items to use I neglected the fact that each piece of gear was going to hang so low, and in turn needed to hang each stick a lot further down than I wanted to.  I also wish that I could have found a place to hang up the final project where it would look more free hanging.  While the bike stand worked well in theory, I thin that it took away from the aesthetic by being able to see the thick rod in the background, drawing some of the attention away from the artifact.  I don’t really have any additional plans for the project and I certain it will get taken down as soon as the space in my house is needed for another project.  Overall I think it turned out well and despite the hours spent shifting around each individual piece and watching the entire thing fall apart several times, I really enjoyed the building process.

*all other images are original property of Ben Husa