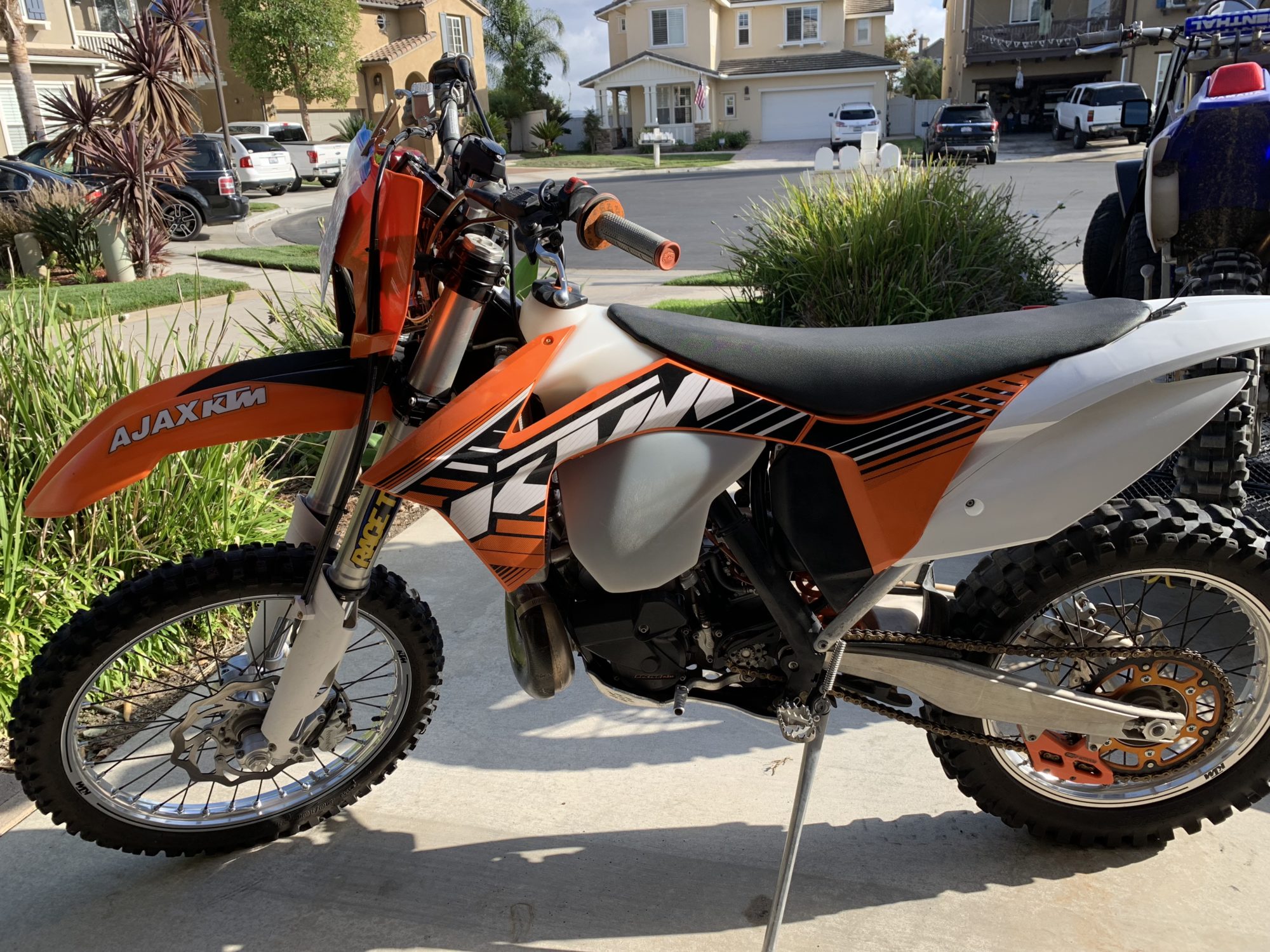 One of my favorite hobbies is dirt biking – I ride a KTM 300cc (seen in the featured image) two-stroke that has been an absolute blast to ride for the past several years. One of the aspects of two-stroke engines that make them so fun is the simplicity of the engine itself. A two-stroke engine, as the name suggests, has two strokes to provide power to the transmission: an intake/compression stroke and an ignition/exhaust stroke. Because of this, two-stroke engines have an extremely simplistic design – a mock-up of the two-stroke engine cycle is shown below:

My initial ideas lead me to want to replicate this motor in some way for a desk lamp. I’m still in the brainstorming process, but I think a desk lamp would be the perfect opportunity to model this while having a cool dynamic desk toy. First off, however, I want to make this engine look more similar to the one on my dirtbike. My engine does not have the heat sinks seen above, as it is liquid-cooled. I’m wondering if I can find a cheap, liquid-cooled two-stroke engine to make this from – it would be so cool to have light bulbs attached to where the coolant hoses enter the engine. An example of coolant hoses coming out of a two-stroke engine is shown below.

Obviously, I wouldn’t necessarily want the bulkiness of having an entire engine on my desk, so I’ll have to decide whether I want to make some pieces of this out of metal, or, alternatively, 3D print custom-designed parts. I’m personally leaning towards 3D printing my own custom-designed parts to get the dimensions exactly how I’d like. I can, however, use heavy duty hoses like those seen above, to hold wires for the lamp.

The crux of this project, to me, is having both a functional desk lamp and a cut-open mockup of a two-stroke engine that is actually able to rotate. If I choose to have one part of the lamp that is not custom-designed, it’d likely be a piston from a real engine. Although this project was slightly inspired by the upcycling projects, I think custom-designing this lamp can allow me to express creativity regarding what aesthetic I’d like to showcase. I can go the route of a steampunk-esque route, using lots of gears and fine details, or I can take a minimalist approach, which seems more inspiring to me. The minimalist approach seems more useful to me since I am designing the parts, it’s easier to design parts that are less complex, but focus on the material used.

Regarding material, I have tons of different 3D printing materials: white PETG, orange glass-filled nylon, black nylon, etc. I’d love to explore more 3D printing materials that could give the engine a simple, yet beautiful appearance. An example of some materials I’d consider using are from a famous 3D printing company, Prusa3D, which makes some beautiful filaments such as Galaxy Black, Urban Grey, and Anthracite Grey. Examples of those colors are shown below, in the order in which they were presented.

I feel that utilizing some of these colors, using simplistic design, can capture the beauty of aluminum cast parts, such as engine cylinders used in two-stroke engines. I think two ambitious goals that I can achieve are: having a moving piston when the lamp is activated and using a sparkplug as the lamp switch. I’m completely open to suggestions for what else to build on for this project.

Featured Image: Image taken by myself

Example of a liquid-cooled engine