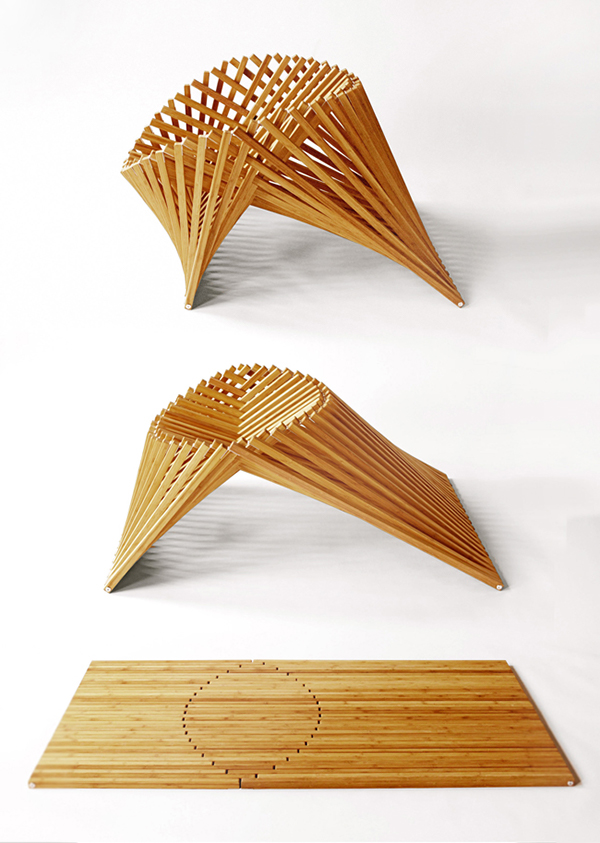 For my final project I have pretty much settled on the form of the chair. As the featured image shows, I will be going with a Robert Van Embricqs style folding chair. I think its a very unique and interesting design as a chair, but what really does it for me it the fact that it folds flat with very few extra pieces of hardware. This results in a chair with a lot of design flexibility, and a smooth surface for me to work with. I’m not sure if I will go for the same exact design, but it will definitely resemble it due to the qualities it possesses.

My next steps will be to sketch and narrow down an exact design. From here I will probably make a 3D model to visualize the movement, and finalize the dimensions. I’ll then source the wood, cut it to length, drill the base holes, and sand them smooth. From here I’ll need to get a metal rod to fit the base holes, and drill the flexible connections (probably leather) into the wood segment pairings. From here I’ll obviously test the chair and make improvements if needed. After that I’ll get started on implementing the mural.

For the mural (which is painted on the chair when flat), I originally liked the early American tattoo aesthetic. As part of the activity for this blog post, I sketched 4 different ideas for alternative murals. (From left to right, top to bottom) the first is an abstract geometric design, then a beach scene, then particles of varying density, then tiki faces. The abstract design may play to a certain design movement, but the one featured is mosaic shapes. The beach one is kind of a minimalist representation of a scene you might see in a more realist style. The particles would be an interesting way of representing something. From up close, It would just look like dots, but from a far, it might make up an image, scene, pattern, etc. I think that there is real potential to utilize this general idea, and it made me think of using a soldering iron to burn the wood (an idea I hadn’t considered prior to this). The final Idea is tiki faces. I like this one because its simple but also fun, and it goes with the form in the sense that it is boxy and modular. I think this modular idea could pair well with some of the other Ideas I have had.

Overall the sketches taught me some valuable things. It made me aware of general styles and themes that could pair well with the form, it gave me the idea of using wood burning or carving, and it let me consider different types of artistic themes that I wouldn’t have thought previously. I’m not sure if I will stray from the early American tattoo aesthetic, but this process has opened my eyes to other possibilities (pop art could look cool), and I wont get started on that until the chair is actually fabricated, so I have time.

Joshua Greenburghttps://joshuagreenburgportfolio.weebly.com/
Originally from Stamford, Connecticut, I am a passionate maker, designer, and engineer interested in human centered product design. Design methodology and collective intelligence interest me as well and I enjoy collaborating with others to create new things. When I'm not making things with my 3D printer or working on my Graphic Tee-Shirt Design company, I enjoy exploring the outdoors. Rock climbing, Skiing, Biking, Running, Backpacking, Metal detecting, and soccer which are just a few things I love to do.
Previous Post
Main Project Aesthetic and Plans/Alternatives- The Light Board
Next Post
Final Project Plans: Mousetrap Car