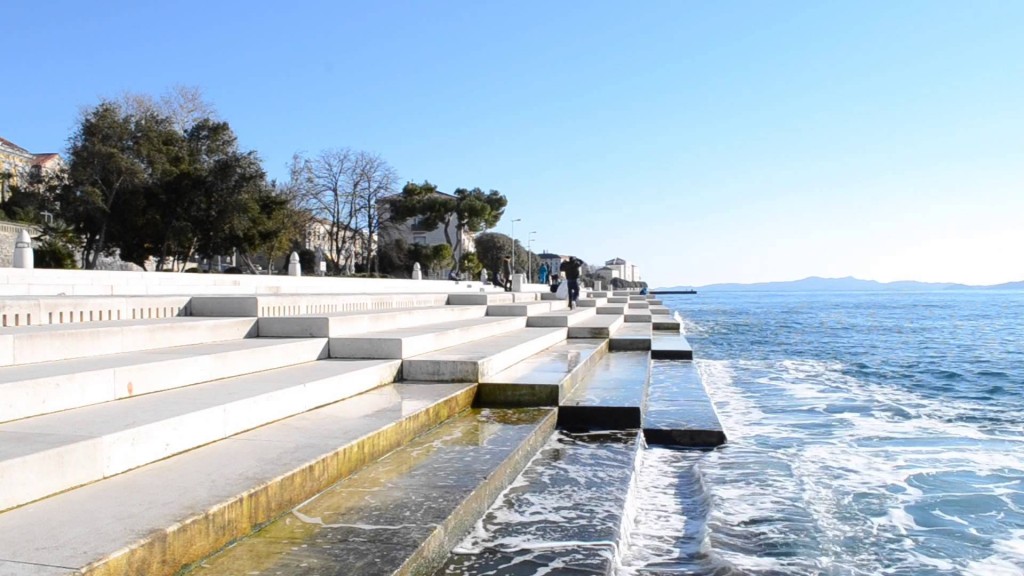 He installs exhibits where embedded microcontrollers around the room and within different components send MIDI data back to his computer and digitally produce sound. Some of the components produce live sound as well, as a reaction and response to both physically-controlled and electronically-controlled signals.

For example, one of his works called “Liquid Percussion” used computer-controlled valves on the ceiling to release specific drops of water that would then fall and strike instruments below. You can hear what it sounded like here: Liquid Percussion.

Another example of his is called Seismophon, where he interprets seismic data from around the world using patterns played on xylophones and marimbas. Depending on what kind of seismic activity is happening and where it is happening, the rhythm of the patterns and on which instrument they are played will be different.

I’m also inspired by the Sea Organ in Zadar, Croatia. This is an architectural feature which plays haunting music produced live by the funneling of waves and wind through tubes located within the shoreside marble steps.

I love the idea of taking a natural feature such as the dripping of water or the movement of the ocean and turning it into music. In the re-imagination and audible exaggeration of these natural occurrences, the existences of these organic motions are elevated in order to be heard as well as seen or felt. It’s kind of like adding a new dimension to an everyday experience, and in the process that everyday experience becomes art. People are then invited to contemplate and appreciate that piece of reality, as they normally wouldn’t, lending more thought to its presence, function, and form.

I would like for there to be separate components each controlled by a different movement, whether that be speed, pressure, angle, etc. I would also like for this music to be produced live, as in it would be created as an immediate response to the wearer’s motions. I’m not quite sure about an aesthetic, as I think the form of the instrument would have first be determined by the function, but I would like to involve lots of visual, artistic aspects in the configuration of the project as well.

It doesn’t really have to be practical, it would more so be focused on the interactivity and the experience that it generates for the wearer.