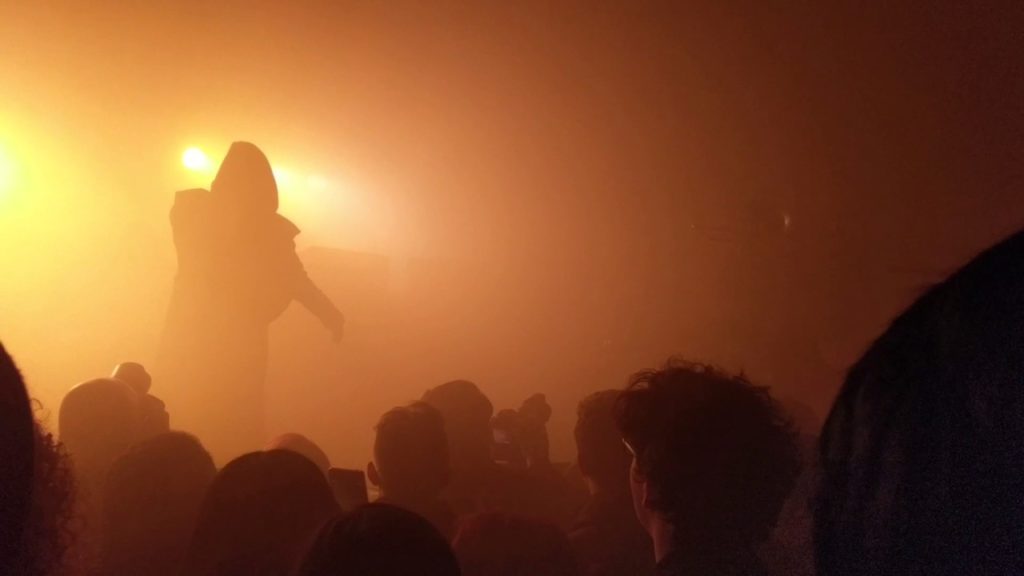 Sunn O))): From Amplifiers to Altars

Sunn O))) (simply pronounced “Sun”) are a peculiar metal band from Seattle, WA, known for their punishing and monolithic drone releases as well as their ritualistic live shows. Their live audio philosophy reads as following: “MAXIMUM VOLUME YIELDS MAXIMUM RESULTS.” Walls of amps line the back of the stage, belting out hundreds of watts of power as guitarists Greg Anderson and Stephen O’Malley release enormous, droning chords. Occasional live collaborator Attila Csihar provides low, ritualistic chants that ionize the air as smoke machines conceal the performers behind a hazy wall of light and sound. Also, did I mention that they all wear dark ceremonial robes when they perform?

Earth has obviously championed this dark aesthetic, carrying it onto releases such as Pentastar: In the Style of Demons (1996) and The Bees Made Honey in the Lion’s Skull (2008), but never to Sunn O)))’s extremes. Beyond the outward aesthetic the two groups share, there is another unifying thread in their unique sound: their choice of amplifier.

Enter the Sunn Musical Equipment Company of Tualatin, OR – longtime manufacturers of reliable and reasonably cheap amplifiers, formed in 1965 and closed in 2002.

Sunn found its roots in clients such as the Beach Boys and John Entwistle, providing high quality, reliable, and great sounding amplifiers for cheap. It is to be noted that Sunn had a pretty minimalist aesthetic, designing their amplifiers to have simple, attractive control schemes with little flair. They feel kinda monolithic, in a way.

Notable bands using Sunn amps from the PNW include Unwound, Melvins, and the aforementioned Earth, among many others. Many of these bands preferred these amps for their enormous sound and fantastic distortion, and with these bands came a sort-of Sunn mythos. Vintage Sunn amps command premium prices today, with their most revered amp, the Model T, regularly fetching prices of over $2000 on the used market.

Now, back to the band Sunn O))) – after taking the reigns handed to them by scene-mates Earth and Melvins, Sunn O))) decided to take the musical associations with Sunn amps in an even darker direction. Once known for their reliability and craftsmanship, Sunn amplifiers are now associated with a monolithic sound, infinitely heavy guitars, and with drone-doom bands around the world (see: Boris, Melt-Banana, etc.).

Despite having dissolved as a company nearly 17 years ago, Sunn’s legacy lives on with this newfound aesthetic. Countless imitators have taken their amp designs and aesthetic and modified or re-purposed them in countless ways – clones of amplifiers, amplifier preamps condensed to guitar pedal size (even I’m working on one right now!), to even just general product design.

Sunn left an enduring legacy in the American and worldwide underground rock scene, but did so almost entirely without their own involvement. It was up to bands like Melvins, Earth, and later Sunn O))) to develop and nurture an aesthetic for Sunn amps, redefining their image as a whole. Sunn amplifiers define many sludge, doom, and drone bands, and the scene wouldn’t be the same without them.